With the widespread prevalence of electronic crutches in popular music these days, happening upon pure, raw talent is an unfortunate rarity, but deliciously welcome when it does present itself. It has most certainly bubbled to the surface in the form of the soulful blues Southern rocker Marcus King. A fourth-generation performer whose grandfather was a country guitarist and father is blues man Marvin King, he’s got much more than pedigree working for him. His soulful voice and guitar skills especially set Marcus King off as singular.

Shredding and singing for dutifully impressed crowds for years now, the Greenville native already has a critically-acclaimed record under his belt in the form of the Dave Cobb-produced Carolina Confessions with The Marcus King Band. Now he’s out with a solo effort called El Dorado with the emergingly-prolific Americana producer and record label owner, Dan Auerbach of Easy Eye Sound.

Similar to a few years ago when it felt like every other record had Dave Cobb’s name associated with it, such is the case now with The Black Keys guitarist and singer. Unlike Dave Cobb who takes a mostly laid back and organic approach to recording—often to the benefit but sometimes to the detriment of an album—Dan Auerbach takes a much more heavy-handed stance, often collaborating in the writing, and commonly implementing a very specific style indicative late 60’s soul music, irrespective of the original style or approach of the artist he’s producing.

We saw this from Yola, who is also an Easy Eye Sound artist, as well as Dee White and others. Even the more hard-edged Kendell Marvel had a few songs on his Auerbach-produced record that evoked the vintage soul era. And Dan has found some critical success with this, and it fits well with the already-established style and sound of a performer like Marcus King, so you’re not surprised when Auerbach brings the throwback soul approach hard and heavy to this record. 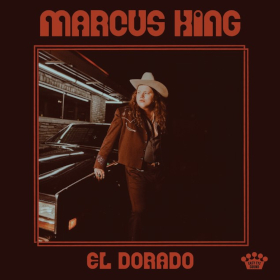 El Dorado finds ample moments of vintage soul goodness during it’s 12 tracks, evoking nostalgia like a great classic country record, and shining a spotlight on Marcus King’s surprisingly soulful voice. But the slathering of soulful elements in such copious servings is also where the audience might find their greatest concern for the album.

Dan Auerbach was smart to recognize that Marcus King was more than just a guitar player who was noted as a prodigy by age 11, and more attention needed to be paid to his vocal prowess. But Marcus is no Chris Stapleton, or Luther Vandross. In multiple moments on this record, King’s singing performances feel exposed by stretching his capacity into unfamiliar registers above his sweet zone, or putting him too out front in the mix. The opening song “Young Man’s Dream” suffers from this, and unfortunately sets the table for the rest of the record.

Marcus King’s greatest superpower is still his guitar playing, and though it’s true we are living through an era when instrumental virtuosity is less important to the listening public than songs and singers, you still must lean on your strengths as a performer, no matter where they may lie. There are too few moments here for Marcus King to stretch his legs and expose the guitar playing part of his game, while some songs seem to forego his guitar playing almost entirely.

El Dorado still deserves to be considered positively in the greater realm of recorded works in the roots realm, but perhaps it leans too heavily on style in too many places to be considered distinguishing. Period music can be very cool and still relevant to audiences today. But Dan Auerbach’s palette seems to be a little too narrow. It’s been discussed before with previous projects how much he loves the glockenspiel— the small, xylophone-looking bell instrument. It’s all over El Dorado, and even though this may make the “Glockenspiel Players of America Local Chapter 113 Nashville” very happy, it’s making all of these Auerbach-produced records sound predictably the same.

The second song on the album called “The Well” doesn’t feature any glockenspiel and has plenty of loud guitar. But the lyrics are very cliche, and it sounds like it was recorded to endear itself to a GAP commercial. Don’t let all this negative rhetoric take away from some of the great songs that El Dorado has to offer though. “Wildflowers and Wine” finds a much more flattering key for Marcus King’s voice, and it features that great soulful guitar playing that had you paying attention to King in the first place. “Say You Will” brings the Southern rock edge that is vital to Marcus King appeal to a record that sometimes feels too genteel and stylized for his established audience. And “Too Much Whiskey” leaves little to second guess, and is the track country fans should gravitate towards first, especially since it works well as a Willie Nelson tribute.

Raw talent is something that can’t be learned or taught, but it’s increasingly tough to know what to do with it in a music world where it’s so often lightly regarded compared to catchy moments and hip style. Sometimes that raw talent of Marcus King gets lost in the weeds of El Dorado, but at other times it shines right through, and presents Marcus as the important personality in Americana and Southern rock that he is. Cherry pick if you must, and grumble that he was better with his band, but also give this album a fair chance, because some of the concerns for style and production from this set of ears might be exactly what you’re looking for, and overall, are better alternatives to most the acrid trends infecting popular music.