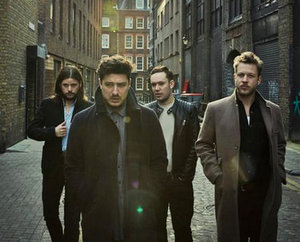 Well I hope these British boys invested their money well.

The truth is Mumford & Sons were in an impossible situation. And it wasn’t completely their fault. As the poster boys for the over-saturation of string bands in the early part of this decade, it was their destiny to have their ox gored by the popular consciousness. As soon as the humor in these bands with their little mandolins and banjos, suspenders and paperboy hats reached apex proportions in the zeitgeist, it was over. They come out with a fourth consecutive album of really earnest and emotional string band music, and they get mocked for being outdated and overdone. They go electric like they do in Wilder Mind, and they get painted as turncoats by the roots community, and play right into the hands of detractors who said they were nothing more than a pop rock band playing primitive instruments.

In the end, Mumford & Sons chose option ‘B’ as maybe the lesser of two evils. If they had to eat crow about their commitment to roots music, at least they wouldn’t be left behind when it comes to sonic relevancy. Though really, what’s relevant about generic British rock music these days?

The best way to describe Wilder Mind is that it sounds very much like Mumford & Sons. Forget that they’ve gone electric, you nearly forget about this a few songs in. What you do notice unfortunately is that aside from plugging in their instruments, so very little has changed with their approach. This album is virtually dead on arrival when it comes to exerting any type of creative challenge or relevancy. There’s not just zero growth in the writing or composition, there’s no change or spice or diversification of anything. You feel like you’re listening to the same song over and over, just slightly different settings on the same generic Mumford approach.

When their last record Babel came out in 2012, Mumford & Sons proved themselves to be one of the last remaining bands that could go gold upon release under the new music streaming model. Babel sold 600,00 copies in its first week just in the United States, accounting for the best debut of the year up to that point. Wilder Mind will come in with less than half of that—a big downgrade for what was thought to be one of music’s biggest franchises moving forward. Mumford & Sons are the Bee Gees of string bands.

Could they have taken a shorter or longer hiatus? Would that have shaken off what seemed like their inevitable succumbing to negative public sentiment? It’s doubtful. Acoustic or electric, sooner or later, Mumford & Sons needed to shake up their approach significantly to extricate themselves from popular sentiment purgatory, and they fail to do so on Wilder Mind. 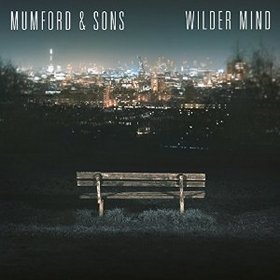 And it’s not just that the songs offer little contrast from each other. Within the tracks themselves, in many cases the instrumentation is all smashed together in the mix to where it’s just a wall of electric sound that doesn’t allow the listener to separate any single element from the noise and appreciate it. Marcus Mumford relies on emotion to engage the listener, not literary artistry, and in the end it isn’t enough just to resonate when it only touches such a narrow sector of the emotional array one song after another. It’s not that Mumford & Sons’ music is antiquated as much as it’s uninspired. It feels like one photocopy over and over.

Mumford & Sons were never as good as their staunchest proponents attested to, but in fairness, they were never as bad as their harshest critics proclaimed either. The issues listeners had with their music were just as much about cultural divisions and musical tribalism as sonic shortcomings. Mumford & Sons may have never released a great song, but they’ve never released a bad one either, and that maxim goes for the songs of Wilder Mind as well.

Listening to this album, there’s nothing to be offended by unless you want to be. In fact Mumford & Sons may benefit by trying to be a little more offensive. In the end the fallacy of their approach might have been shaving all of the rough edges off to offend no one and appeal to all, and in turn delivering something that was too pallid. Still, the Mumford & Sons approach is one of music with a high emotional component and a driving pentameter that while maybe not appealing to the cultured listening palette, is not really acidic either unless you’re listening with some philosophical beef.

Mumford & Sons is not the problem, and not even by a long shot. I’d rather listen to Wilder Mind than most of the strident trash emanating from my country music radio. Mumford fans shouldn’t have to resort to wearing bags on their heads; these are people that appreciate music with more substance that what the mainstream dishes out.

Mostly though, Wilder Mind just makes me sad for the future of music. Modern music is out of ideas and directionless. It’s not that Mumford & Sons should have made a better choice in how to approach with this album, it’s that they had no other choice due to the narrowness of their skill set and influences. Still, hating on Mumford & Sons is just as much sport as it is anything. Whether Wilder Mind is their swan song or their start on an illustrious rock career, Mumford & Sons has always been and will continue to be, mostly harmless.