Many deal with music as a mass market consumable, artists and fans alike. The hope is that it reaches as many ears as possible, and if that means compromising on artistic integrity and ethics, so be it. Cutting corners or appealing to the lowest common denominator is all just part of the penance for the stardom or superstardom that music can bestow. But others approach the occupation of music like an artisan trade, caring more about serving one person at a time with finely crafted goods made from love and individual attention, with a focus on detail and stamped with a maker’s mark assuring a pride and timelessness in the results.

It’s in this latter manner that Pharis and Jason Romero approach their craft, whether it’s making handcrafted, custom-made banjos in their humble shop in Horsefly, British Columbia, or the music they perform with those banjos and other noise makers for the entertainment of friends when they have the time and inclination. Mind you, Pharis and Jason still want as many people to partake in their music as possible, as any artist should. But this is the family business set up to support the homestead and share music with friends and community. If others want to peer in, all the merrier. Expect them to start stamping out mass produced banjos by outsourcing them to China or to start penning booty shakers for the boys on Music Row, you’re sorely mistaken. The sheer concept couldn’t be more foreign to what Pharis and Jason are about.

This artisan approach to music was all the more underscored in 2015 when the singing duo’s house and workshop burned to the ground, and right before the birth of their second child. The effort and toil put not just into their livelihoods, but into their home itself was relegated to ashes, and would have left them devastated. Luckily, all the love they had sown into their music and instruments came back to them many fold as the music community rallied around them, raised the funds to allow them to rebuild their workshop, and now to move on to reconstructing their house as well.

As one can imagine, making music took a back seat to everything else after the Romero fire and welcoming their second child. But they did have the foresight to create a little recording studio as part of the new banjo workshop during the reconstruction. It was in this workshop between the rebuilding efforts that the couple recorded Sweet Old Religion, which is the duo’s first album of all original songs, and the first recorded effort since feeling the burden of total loss, and the humility of having to rely on the charity of others to sustain their simple approach to life. 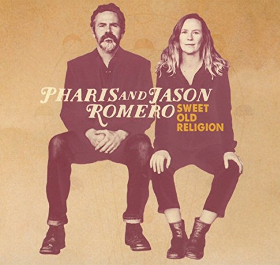 The music of Pharis and Jason Romero is stripped-down and rootsy, born from the traditions of country and folk similarly, and steeped in songwriting customs and the interplay of harmony. To be perfectly honest, the duo’s earlier work had always been judged as a little too folky to present to the Saving Country Music reader, who on the whole are more in search for twang and whiskey tears. Not a knock on the music at all; the duo was just more to the side of the bulls-eye than on the center. But if you’re looking for an entry point into what Pharis and Jason Romero are capable of as a steadfast country fan or otherwise, Sweet Old Religion is it.

It’s a flaw in the human design to believe that dutiful preparation and the surplus of resources is what results in the best output. Often it’s adversity and accident that give rise to the most compelling art, or the greatest inventions. In the case of Pharis and Jason Romero, having their comfort zone razed and everything they love placed on tenuous footing resulted in their survival instincts kicking in, a confidence in themselves to not just reincarnate old songs, but to make songs worthy of being reincarnated by future generations, and a new relationship with love and community not just as a compelling concepts, but as a working model of how to get through the hardest patches of life. All of this is captured in its own poetic way in the 11 songs of Sweet Old Religion.

With assistance from a few select musicians, Sweet Old Religion is sparse and acoustic, but still served with plenty of body due to the heaviness of the songwriting, and the compositional prowess from the harmonies and the textures chosen for each tune. As banjo aficionados, Pharis and Jason know just the right tone—a more light sound for a love song, to a more guttural, woody timbre for others—to bring the mood and message of a song to life. The interplay between the couple’s vocals has never been more delightful, evidenced in the title track, which also communicates why many cling to the bosom of divine belief, not always as blind adherence, but as a way to remove fear, and bolster the spirit in life.

Though it’s probably still more appropriate to catalog Sweet Old Religion in the folk section, songs like rousing “Salt and Powder” indicative of good ol’ Appalachian music, and the honky tonkin’ “Come On Love” with the rare appearance of electric guitar really help give this album a wide appeal among all roots fans. And though hearing Pharis and Jason harmonize is what this duo is all about, Pharis singing by herself on the aching and sweet “You Are A Shining Light” might result in the best of the lot.

Taking the type of holistic approach to life and music Pharis and Jason Romero have done leaves one open to the tragic whims of reality. But it also means that you’re surrounded by the love you shared that is willing and ready to reciprocate itself if the need becomes necessary God forbid, just like it did for them. And now through their experience, they’re returning the favor by doing what they do best, which is making music, making banjos, and being an example of how the simple and humble approach to life can be so much more fulfilling than the riches at the end of laboring for mass appeal.