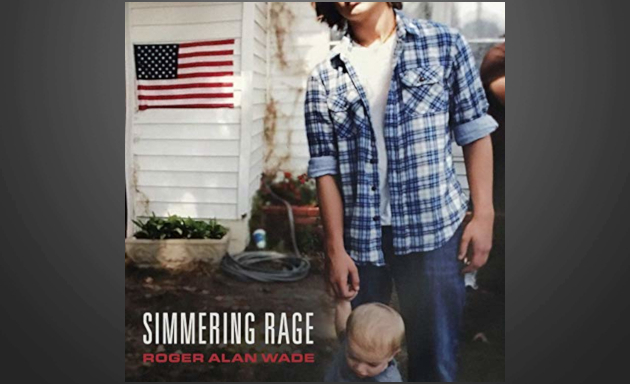 For some, the name “Roger Alan Wade” evokes only foggy recollections of affiliations with famous cousin Johnny Knoxville, and perhaps songs about being too fat to fly and having to be tough if you’re gonna be dumb featured in various episodes of the Jackass empire. But those who would accuse the Chattanooga resident of solely skirting by simply on silly songs and sheer nepotism likely have no idea he used to work as a professional songwriter in Nashville back in the day, composing songs for the likes of Waylon Jennings, George Jones, Hank Williams Jr., and Johnny Cash.

They also probably don’t know that pound for pound, Roger Alan Wade may be one of the best, and most emotionally potent songwriters and storytellers of our generation—a strong bullet point that is bolded and underscored with his latest album of all original songs, and his first after a five year gulf called Simmering Rage.

There are songwriters, and then there is Roger Alan Wade. There’s no frills to his craft, and no accompaniment on his records. With just himself and an acoustic guitar, and perhaps a little harmonica here and there, Roger Alan Wade sets out to encapsulate and articulate emotions from love to fear to rage in ways that the canon of modern words and music have yet to discover, and to tell stories to make you cry or laugh more than most of the ones you’ve heard before.

Like all the great songwriting solo performers, Roger Alan Wade builds variety and texture into his music from vacillating between personal love songs like his recollection of a California fling in “Coldwater Canyon,” to raucous bar stompers like “Drunk, Pissed, and Coked Up.” Wade also pens songs that challenge the songwriting masters of our time with their poetic wisdom and insight, like “Cherries in an Alabaster Bowl” that’s like a musical version of a Vincent Van Gogh work, or the sage advice of “Elvis Blues” that imparts more enlightenment than two full months worth of self-help study.

Thematically, Simmering Rage offers a ground level perspective on the rigors and frustrations of American life, from the disillusion of broken dreams that are encapsulated in the title track, to one of the best dissertations on the dissent dividing the United States in “Best Out Of The Blues.”

…There’s plenty of blame to go around, but blame won’t pull us through.
It’s a shame the fools to blame got you blaming me, and me blaming you…

It can be frustrating in some respects being a Roger Alan Wade fan, hoping over the years that he’d take the next step to fronting a band beyond the occasional one-off show, or perhaps putting out a record of some of his best songs with an All-Star studio crew behind him, or hit the road more than he does so you don’t have to explain to your buddies that he’s so much more than the guy with that weekly SirusXM radio show with his famous cousin.

Then again, and unspoiled Roger Alan Wade spinning tales and holding court behind an acoustic guitar is probably what makes him so compelling, and at this advanced stage in his career, who would want to put that in peril by saddling him with some producer looking to do a reinvention. Roger Alan Wade’s magic is whittling out the kernel of great song ideas, and not complicating matters by trying to make them palatable to the masses. Roger’s got his royalty checks coming in, and a legacy he’s forged to the people that matter, which are his peers in the business, and those listeners who are willing to forage for the best music under the overturned rocks in the shade of the music of mass consumption.

Simmering Rage will not be for everyone, but it will be received well by the ones who count themselves serious fans and students of the art of songcraft, and don’t need frills and accompaniment to find the appeal. No matter if it’s a heavy metal headbanger, a soft folk ballad, or an Outlaw country anthem, every good song can still be stripped down to the words and melody and still shine, and Roger Alan Wade’s songs shine all the time.