The Shivering Denizens and frontman Ron E. Banner epitomize gonzo-style West Coast country. The alternative rag in their local port of Seattle felt compelled to compare them to a dumbed down version of the Drive By Truckers, when the answer to the Denizens’ music lineage could be found right under Seattle Weekly’s Starbucks-stained noses. Just like fellow Seattle-based punk gone country group The Supersuckers, The Shivering Denizens serve up a fun, sarcasm-laden version of country that refuses to take itself too seriously.

Not as salacious as Bob Wayne & The Outlaw Carnies, and more solidly country than what the Supersuckers usually serve up during their “country” set, The Shivering Denizens are like Ken Kesey meets Merle Haggard.

That is why I was a little leery at first to hear their new album was somewhat “conceptualized.” Concept albums are better suited for space jams and serious forays into the depths of the human soul than sarcasm. Baker-Whiteley was a small, coal-mining town in Pennsylvania, now a ghost town where Ron E. Banner’s roots trace back. His grandfather settled there as a Hungarian immigrant, and this album plays out as a story of America through the evolution of Banner’s family over the years. Luckily though, it is still tinged with that dark, Shivering Denizen sense of humor we’re used to from their previous works. 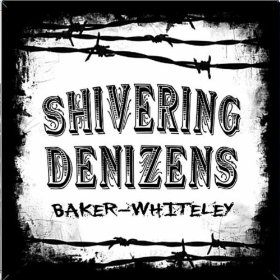 Baker-Whiteley doesn’t set any new land speed records and probably requires a disposition to like underground-style country to get into, but the concept is true and is carried through with some good songs. The theme is the decay of the agrarian lifestyle in America.

This album starts off telling the story of papa Banner making his way from Ellis Island to the Baker-Whiteley coal mines and partaking in the local Allegheny moonshine. This is tied into the modern-day homemade innebriant of choice of methamphetamine during the next song, “Hartwood Train”. “Double Shot” goes from the fields to the factories and the fibrosis of the liver that usually follows, with Ron E. pulling out his best lyrical hook in the album, turning the self-loathing line “poor me” into the ordering of booze.

Not all the songs fit comfortably into the Baker-Whiteley concept, but still tie in to the loss of values and sanity, like the song “Richard Ramirez” that explores the rock star fascination America has with serial killers. “She’s Not On The Menu” is complete silliness, but seems to work positioned late in the album where you’re caught off guard by the overt raunchiness.

Similar to other artists like Bob Wayne, Eddie Spaghetti, and the Supersuckers, sometimes when they do decide to get serious, it’s hard to re-adjust your perspective. “The Whistler” is about the simple beauty of hard work, faith, and farm life. The message of “Angel’s Last Waltz” is a little hard to gather, but seems to center somewhere around the loss of religious values. These songs are worth not overlooking.

Baker-Whiteley is a really well-made album with diverse and solid instrumentation including piano, accordion, and female harmony singing. Whatever the songs called for, the Denizens made sure to procure. The wild nature of their music depends a lot on their use of harmonies, background vocals, and the way they’re arranged.

As curious as it may seem to some, The Shivering Denizens, along with many other Pacific Northwest-based country bands prove again just what a modern-day proving ground the top left corner of the country is for the roots.