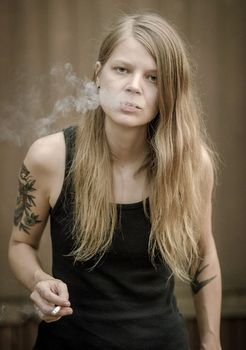 Sometimes it takes a bad seed to make good country music. That’s just the way it is. Just how bad Sarah Shook is probably depends on your perspective, but she was born into a good Christian home and raised in a wholesome manner that taught her to do everything in virtually the exact opposite way she eventually did it. Home schooled and only exposed to worship music at an early age, Sarah rebelled when she got the chance and her first band was named “Sarah Shook & The Devil.” Sorry mom and dad, but there was something inside Sarah that had to come out, and though this isn’t devil music by any stretch, it’s certainly not scriptures.

Who knows what whims govern the exiled ghost of authentic country as it scans the fruited plain looking for souls to possess? But it found Sarah Shook in North Carolina, and her destiny was inescapable. She opens her mouth and a ghostly, smoky yodel is emitted carrying the weight of a thousand troubled and worried spirits crying out in tormented moans about heartache, trouble, and the resignation to never living up to the expectations of yourself and others.

Sidelong may find itself in a dark and troubled place much of the time, but it’s good old country music at its heart. You know, country music? That stuff they used to make before Music Row lost its everloving mind? Music that said something, and conveyed a feeling that bred a sense of commiseration and shared grief with the audience resulting in a strange healing? Yeah, that stuff. Twangy, aching, and true—that’s what you find on Sidelong in ample portions, and not cut with “sensibilities” or contemporized for the modern ear.

Helping Sarah along the way are The Disarmers, which have a bit of an interesting story themselves. Guitarist Eric Peterson is a holdover from Sarah’s previous band, and the pile driver to getting this album recorded and out to the world. Then behind the drum kit is none other than throwback country artist John Howie Jr., formerly the frontman of the Two Dollar Pistols, and an accomplished solo singer and songwriter himself. Jason Hendrick stands behind the bass fiddle, and together they fool everyone into thinking they know what they’re doing by executing tight and authentic arrangements to Sarah Shook’s original compositions.

Sidelong has some really serious haymakers on it folks. The first song “Keep The Home Fires Burnin'” immediately lets you know that the spirit of this album is one of uncompromising country leanings, and the attention to melody paid by guitarist Eric Peterson and embodied in the arrangement make this an excellent song to start an album with. Then the next song in called “The Nail” let’s you know this will be an album with some piss and attitude on it, so be forewarned. 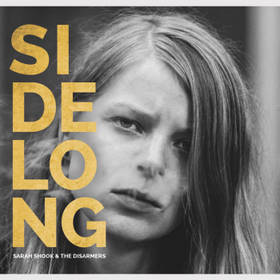 The title track “Sidelong” is arguably the album’s best with such incredible heart-wrenching emotion strained out through Sarah’s broken yodel. Not since Dolores O’Riordan’s early Cranberries recordings have we heard a female yodel so lonesome, yet so rising in spirit. Sarah Shook resides in a slightly lower register for you average female voice, so she’s able to go to a falsetto without sounding like a screech, and her voice fails her at the most opportune times to communicate tormented emotion, similar to Emmylou Harris. And the way The Disarmers understand how to interpret “Sidelong” and fade out the ending is deserving of bravos.

The song most likely to get people’s attention is “Fuck Up” co-written with John Howie. Even if you want to hate this song, with lines like “God never makes mistakes, he just makes fuck ups,” you just can’t.

Sidelong also has a couple of tracks that sound like less than 100% effort, and even though if you listen to the message of the other songs you may feel this is to be expected, with some of the greatness captured here, there’s an elevation in expectations. “Misery Without Company” and “Solitary Confinement” could have used a little more work, and in moments slightly expose what is the best part about this album: Sarah’s voice and songwriting.What Sarah’s doing vocally is spectacular, but she still has to be careful of staying within her true voice instead of a voice she feels may fit a particular song.

You hear some similarities to Lydia Loveless with Sarah, and seeing how the subject matter is similar in spots, comparisons are probably not unfair, though Sarah’s singing feels more natural . . . most of the time.

The strong stuff on Sidelong is quite strong, and is deserved of high praise and deep consideration. Though it may seem ticky tack, I’m pulling back from the top grade of “Two Guns Way Up” for some slightly weaker tracks. But all told, Sidelong touches on something welcome to the country music ear, and makes for one excellent and compelling listen.