Album Review – Ted Russell Kamp’s ‘Get Back to the Land’

If country music was like old-school wrestling (and now that I think about it, it kind of is in a bad way) then Ted Russell Kamp would be one of the good guys. Possibly best known as “Shooter Jennings’ bass player”, this moniker does little justice to the breath of Ted’s talents as a multi-instrumentalist, producer, and songwriter. At the same time, Ted’s willingness to just be “Shooter Jennings’ bass player” shows the humility to do whatever it takes to get good music out there, even if it means playing second fiddle and shelving personal projects until the time is right.

Ted Russell Kamp is from LA, and is not afraid to throw the “California Country” label on his music; a label that to some is a pariah. Truth is, most of what you hear on country radio today would probably best be described as California country: mostly rock with a mix of country elements and influences. But instead Music Row markets it as pure “country” or “Outlaw”, with their stupid laundry list lyrics shoehorned between Black Crowes-style riffs that do an injustice to any label the music might employ.

I don’t like when my relationship with an artist is predicated on a lie. If it is country pop or California country, that’s fine, but don’t call it a dog when it waddles and quacks. Ted Russell gets points from me for being honest, even when knowing adding “California” to describe his music will probably inspire grumbles from some folks far away from the West Coast. Be proud of where you’re from, make heartfelt music, and most importantly, call a spade a spade, and it should override most prejudices. 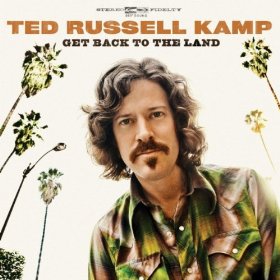 Get Back To The Land and Kamp’s music in general is a cleaner sound then I would normally engage with. There’s not a lot of twang here for sure. But music doesn’t have to have blood and guts to be good, I can tweak my reviewer settings to adjust to a cleaner sound.

This album doesn’t reinvent the wheel or break any land speed records, but it doesn’t try to either, which is refreshing in itself. Ted simply tries to write heartfelt songs and represent them well in the recorded format. What a concept! And in doing so he finds a good balance between visceral and cerebral, accessible and honest.

The strength of Kamp’s music is his songwriting, and his voice. Many signers who try twice as hard are still only half as unique and engaging singers as Ted Russell. It’s this interesting combination of rasp, rolling and ramping between pitches, and control. His songwriting is not spellbinding, but it is solid, and you can tell it is where every song starts–with a meaning or an inspiration that over time is fleshed out with music and instrumentation.

Standout tracks for me were “California Wildflower” which showcased Kamp’s voice brilliantly, the rocking “God’s Little Acre”, and the well-written “Time Is A Joker”. Ted ends with his most twangy offerings “Half Hearted” and “Bottles on the Table”, with the last track being the standout of the album. I would say this is more of a fun album than a soulful album, but “Bottles On The Table” reaches down deep for a little extra something and closes the album out in a very impactful manner. Even if Kamp’s style doesn’t speak to you, you should give “Bottles” an extra chance.

Though I don’t like the sappiness of “Right As Rain”, I could see this song being picked up by a bigger star and becoming a mega hit. There were a few sappy moments on this album that though I will avoid, others might gravitate to.

It’s hard not to cheer for the sideman when he steps into the spotlight, especially when they’re good people like Ted Russell Kamp. Though Music Row might use the “Californication” of music to appeal to wider audiences and the lowest common denominator, Kamp is simply doing what he wants to do, and at the same time going back to the roots of the sometimes maligned “California country” genre–which is fleshing out heartfelt songwriting with country-inspired rock songs that are fun to listen to.

Preview songs and purchase Get Back To The Land