The Ten Foot Polecats on Hillbilly Bluegrass Records are more straight blues than I would normally cover around here. Usually a band needs at least a little something contrified for me to get behind them–a small piece of fried chicken hanging from their beard, or a gravy stain down the front of their shirt–something. But because they are participants in this year’s Muddy Roots Festival, and were there last year, and honestly, because they are just so damn good, I am making an exception.

With I Get Blamed For Everything I Do, the Ten Foot Polecats aren’t reinventing the wheel, they’re just helping it find its groove. This is high-octane punk-inspired driving blues music. If you’re a tragic audiofile like me, that like a drunk whose spent years and years in the bar building up a huge tolerance, the normal stuff they peddle on the radio has no effect. The Polecats are the wickedly pure stuff in the bottle with X’s on the front that your uncle keeps out in the woodshed that is able to bust through. Even to the most reserved music listener, when The Polecats start to screeching, your legs start twitching worse than a dog that’s got to piss like a Russian racehorse. This is raw, infectious, booty shaking, head banging shit that makes you boogie like a meth head on the business end of a stun gun. 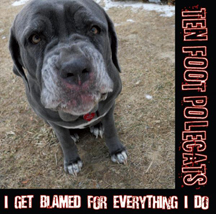 The key to The Polecats magic is the groove and tension. They find the perfect tempo and rhythm that nestles right into the human heartbeat and drive it home. Without getting too music nerdy on you, music is made up of chords, and the way music works is by building “tension” and “resolution” with chord structures. All music does this, but what makes the Polecats unique is they know how to create unbelievable amounts of tension, to where the song feels like it’s about to bust it’s buttons, and when the resolution finally does come, the payoff is orgasmic. The only other groups I’ve ever heard use tension so well are jazzy fusion bands like Phish, or someone like Frank Zappa.

Anybody can get up there and play Mustang Sally. These guys get it. Jim Chilson is one of the most unheralded blues guitarists out there today. When I saw The Polecats live at the Hillgrass Bluebilly launch party, I said about Jim & Co.:

The best flat out musician from the night, on a night filled with so many great ones, might be Jim Chilson . . .The seemingly effortless trance-inducing guitar rhythms with ridiculous fingerwork put the blues in this Bluebilly event, and was accompanied by balls out singing from Jay Scheffler and expert drumming. Who needs bass?

You could not fit a bass in this music; there’s not enough space and range in the mountain of noise that Jim squeezes out of his guitar. Singer Jay Scheffler and drummer Dave Darling do a great job of letting Jim do his thing and not getting in the way, but still adding their color and uniqueness to the band in irreplaceable ways. Dave’s drumming matches the same “Don’t just listen. Feel.” approach as Jim’s guitar playing, and Jay is there to remind you that all this noise is actually about something; blues is blood as they say, and this music came from the heartaches he sings about from the depths of his gut.

The songs “Big Road” and “Dryspell” are probably the best examples of The Polecat’s up-tempo, punk-infused, tension-building blues, but with a band like this the true measure of their talents is if they can slow it way down and still keep you enthralled. They prove they can shift gears with the best with the song “Couple More Miles.” It includes the title lyric of the album, which only seems fitting because it might be the best track on the project.

Again, don’t expect anything mindbogglingly groundbreaking here, beyond Jim Chilson’s fingerwork, but I Get Blamed For Everything I Do reminds you that you should feel music first, then listen, and then not be afraid to succumb to its magic.

You can purchase this album and preview tracks at tenfootpolecats.com or On Amazon.

Frank Zappa, I Get Blamed For Everything I Do, Jim Chilson, Phish, Ten Foot Polecats