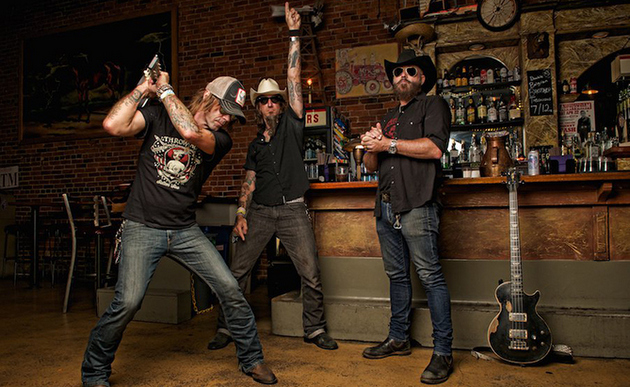 The Supersuckers weren’t the first punk rock band to “go country,” but they were one of the best. When they released their 1997 album Must’ve Been High, it arguably is what put the Seattle-based outfit on the national and international map. Next thing you knew they’re making an EP with Steve Earle and frontman/songwriter Eddie Spaghetti is considered one of the demigods of insurgent country.

That’s why it was so exciting to hear back in 2010 that Eddie Spaghetti had signed to Bloodshot Records and would be releasing a couple of country-style solo projects. But unfortunately the energy, intangibles, and maybe just the timing that made Must’ve Been High so iconic wasn’t captured in the same capacity in those two records. Both had their moments, but Eddie is at his best when he let’s his wild ass loose and gets serious on accident.

So when word came down that the Supersuckers proper were going to take another stab at the country thing, you were careful not to set your expectations too high. But whatever mojo was in the air back in 1997, it is back again in Holding The Bag. This record is badass my friends.

Going back to what the Supersuckers do best, which is come out kicking with a shit eating grin, and then hitting you in between the eyes with something meaningful when you least expect it, this raucous group sets you right about what is real and raw about country punk roots. 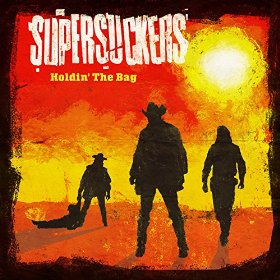 The songwriting here is so clever and catchy and good, they go from meaningful in a song like the opening title track, to shit kicking and hilarious in “Let’s Bounce.” Holdin’ The Bag has a few silly moments like “Jibber-Jabber” and “Shimmy & Shake” that could be considered Supersuckers rock songs dialed down slightly for this “country’  affair. But then they’ll spring a song on you like “High & Outside” with such a great feel and melody, you’ll keep recycling it ’till your non country-loving significant other hates this record forever.

There’s a couple of duets on the record, one with Hayes Carll called “This Life . . . With You,” and maybe the best song on the album, “I Can’t Cry” with Lydia Loveless. Who hasn’t been in that numb moment after a relationship where where you feel terrible and you think if you could just burst into tears it would alleviate your pain, but nothing comes? And sometimes what’s worse than feeling pain is realizing you don’t feel anything at all.

Holdin’ The Bag isn’t a hardcore country album in the sense that there’s a bunch of half-time Waylon stuff and steel guitar. It’s like old school alt-country to be more specific. But there is a few moments when the country goes gold, like the steel-driven “I Do What I Can (To Get By),” and a rendition of Hank Jr.’s “All My Rowdy Friends (Have Settled Down),” which admittedly the world doesn’t need another version of, however Spaghetti peppers in his own references to his old friends in lieu of Hank Jr.’s and it makes for a fun listen the first time or two. There is some filler on this record, but the great songs are really great, and make the whole package worthy of strong consideration.

Putting an extra bit of meaning behind this record is the fact that Eddie Spaghetti was recently diagnosed with Stage 3 throat Cancer, and had to undergo surgery and radiation treatment. You almost might think this would be the impetus to make Holdin’ The Bag one for the ages just in case Eddie no longer ends up making another, but the album was recorded in Austin at Ray Benson’s Bismeaux Studios before the diagnosis. It was shortly after the sessions that Spaghetti got the sad news and had to cancel a European tour. He’s hoping to resume touring with the rest of the Supersuckers near the beginning of 2016.

In a rather pedestrian year for music that has included some high-profile letdowns, Holdin’ The Bag holds up to the “punk gone country” legacy the Supersuckers started some nearly 20 years ago.