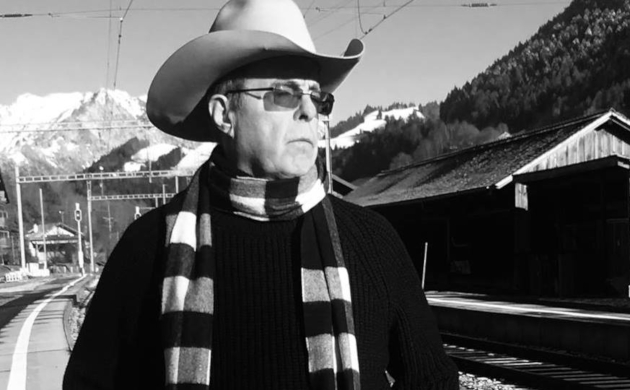 When it comes to contributions to traditional American art forms, there’s not much left that hasn’t been touched by the hands of Tom Russell. From having his songs cut by the likes of Johnny Cash, Guy Clark, and Ramblin’ Jack Elliott just to name a few, to toting the likes of Fats Kaplin around in his touring band as a performer on the honky tonk circuit for so many years, to writing a book with Charles Bukowski, Tom Russell has done it all. And that speaks nothing to Tom’s visual art, his cowboy poetry, novels, and essays, and a host of other passion projects and side hustles he’s engaged in over the years to really make one feel like a creatively-vacant sloth when scanning over his scrapbook of accomplishments.

Of course Tom never hit it as big as many of his contemporaries and collaborators, but his resume still reads like a life well lived and then some. He should be satiated by the sense that his contributions and storytelling have far exceeded whatever inspirations he culled out of American culture for his own devices. With nearly 30 records released, and who knows how many gigs played, he can sit back on his porch and rest easy knowing he’s done his part.

Honestly, what can we expect a now 70-something Tom Russell to have left in the tank? The words and stories he’s expended at this point are enough for two lifetimes. But Tom Russell takes that challenge, calls to his side a tab of paper and his guitar, maybe a carafe of coffee or a bottle of something strong, touches the end of his writing implement to his tongue, strikes a chord, and proceeds to scratch out a record that is better than most of the debuts by the whipper snappers in Texas or east Nashville. 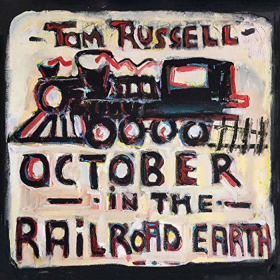 October in the Railroad Earth is as alive as the ground when a freight train trundles by, and as resonant as the sound a steam whistle makes as it lets loose on the walls of a wide canyon. Tom Russell is past the point of having to call upon sheer imagination, chemically-induced inspiration, or dogged determination to compose a story. He simply has to access his memory banks for a good tale, trust his proven capacity with language, and the rest handles itself.

A storyteller first, Russell’s songs mix the right amount of humor, fond reflection, passing sorrow, and smart observation to register on nearly all of the listening pleasure zones as they pass. Russell may have matured past being your cool uncle to now being your cool grandfather, but he’s still cool, sounding like Johnny Cash, sometimes breaking into spoken word recitations to fit in all the details, but never fumbling or losing rhyme. You feel the suspense of trying to run down poachers in the song “Pass Me The Gun, Billy,” you sense the familiar character in “Small Engine Repair” that’s as permanent of a fixture in small town America as the water tower, and you’re not 100% sure what’s going on in “Hand-Raised Wolverines,” but it’s enjoyable to listen in nonetheless.

And October in the Railroad Earth is country by God. As a guy known for dabbling in the folk rock and Americana realm, there is ample steel guitar here, Bill Kirchen on telecaster, and songs steeped in country traditions to make even the most closed-minded shit kickers smile. Granted, this is a Johnny Cash-style of country, so Russell’s billowy voice and poetic pentameter are more prevailing than any vocal twang, but he really endears himself to your country heart with the song “Highway 46,” which works as an touching tribute to a host of country greats without trying too hard. His effort with the Texmanicas called “Isadore Gonzalez” feels a little silly. But aside from this, October in the Railroad Earth gives a lot to enjoy and unravel.

This album is a story of America, and who better to tell it than Tom Russell. His years have only embellished and refined his wit and craftsmanship, and he never lost his hunger along the way. There are good reasons why Russell is so revered by his musical and literary peers, and those reasons remain evident on October in the Railroad Earth.