Trampled by Turtles from Duluth, MN are one of these creeper bands, just like The Avett Brothers were. Somebody hands you one of their CD’s during their formative years, then you go to see them live a few times, first there’s only a few people there, then there’s a decent crowd their next time through town, and then a few years later they’re packing theaters and creating national and international buzz. Trampled by Turtles have flat out blown up on our asses, debuting videos on CMT and selling out theater shows, while still being true to their original approach. That’s what happens when you have good guys putting out great songs and great albums and developing a sound that is familiar enough that it’s easy to get comfortable and acquainted with, but different enough to separate it from the din of string band parody in this the 12th year of the 2000’s. 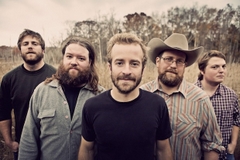 After 8 years of dedication and 6 albums, Trampled by Turtles have proven not just flash-in-the-pan stardom, but old-fashioned hard work can lead to music success. It’s good to see the old moral from the tortoise stand true. Apparently slow and steady can still indeed win the race.

Much of their success came from the strength of their 2010 album Palomino, which struck such a great balance between excellent, melodic songwriting for the alt-country, NPR crowd, and balls-out string jams that got the attention of both the post punk and bluegrass worlds. Stars and Satellites generally has the similar progressive string band approach of their previous albums, but especially through the first few listens, the mellowness of the project is one of the first things that strikes you.

When you actually step back and count the songs, there’s just as many high-adrenaline, up-tempo songs as in previous offerings. Maybe it’s simply in the track order, or maybe in subtle changes in the fast songs or that the slower songs are even slower, but the up-tempo attack that created the important contrast between fast and slow that is seminal to the Trampled by Turtles sound is just not as obvious here, at least initially.

Speed can be a very tricky element in these string bands. It can be their greatest asset, and their worst enemy. The fast songs are easy to like, what the crowd is going to gravitate towards, and what garners them easy attention. But the core fans who actually listen for lyrical composition and soul will crave the slow ones, and the slow songs many times are what gives a string band their substance. If a band like Trampled by Turtles is on stage and asks the audience if they want to hear a fast or slow song, nearly every time the chant will be for a fast one, not understanding the contrast of the slow songs is what makes the fast ones so appealing. And the up-tempo may not always be in concert with the feel of the players on stage, or the heart of the songwriter during composition time.

This may be further emphasized in the construction of Trampled by Turtles, who get typecast easily as a bluegrass band, while bluegrass purists may thumb their nose at them for their progressive style. The Turtles’ players are all very skilled, but some of their style for their fast songs has developed to convey sheer speed as opposed to showcasing technical prowess at a quick tempo. And some specific things, like how the banjo player flat picks instead of finger picking or clawhammering, and how the bass is neither upright or electric, but a shoulder strap acoustic, casts them in this unfamiliar gray area for people who like more predictability in their string band presentation. 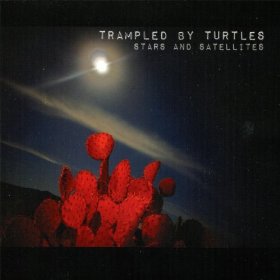 In the end though, tempo and style are just elements of music meant to help convey the heart of a song, and when you peel back expectations or predisposed tastes and listen to the songs on Stars and Satellites, it’s hard to find anything but beauty. As slow and sleepy as this album may seem at first, it’s a challenge to find a song on this album you can truly say is “bad” or even that’s too slow for what the heart of the song calls for. And even if there was a sacrifice in tempo, it was in the name of advancement in the subtly of composition and deeper attention to songwriting that Stars and Satellites boasts. That is a tradeoff any true music fan would take every time.

The songs of Stars and Satellites strike excellent balance and show why Trampled by Turtles are worthy of the elevated notoriety they have been enjoying. “Midnight on the Interstate” is magical in its breadth and space, painting the visual picture of a star-struck panoram and the smallness it can inflict on a human soul. “Alone” is the album’s single and first video, and is a masterpiece of emotional evocation employing masterful spiritual rise through sonic aptitude and wisdom. “Risk” is where the speed addicts get their fill, as the Turtles slam out notes in a complete visceral instrumental experience.

In the end, yes, I would say this album is more mellow than what you might be expecting, but it doesn’t mean that every single song on here isn’t worth your undivided attention, or that Trampled by Turtles are attempting to adapt to their newfound success by trying to be more docile or by implementing the NPR effect. It probably has more to do with where songwriter and frontman Dave Simonett was when he wrote these songs and how they turned out when fleshed out with the other players.

Through excellence and honesty and drive, Trampled by Turtles have defied the odds and risen above the bitterness and obscurity that plague many great underground roots troupes, to begin to find the proper-sized audience that their excellent music is worthy of. One can only hope that Stars and Satellites has the mustard, the speed to allow that audience to sustain and grow. Then again, didn’t we heed the moral of the old fable that speed is subjective? For what it’s worth, my money is on the tortoise.

Purchase Stars and Satellites from Trampled by Turtles

Stars and Satellites, The Avett Brothers, Trampled by Turtles