Regularly playing shows at places like The Broken Spoke, Luckenbach, and The White Horse, Weldon Henson is Texas country honky tonk served straight no chaser, meant to send two-steppers twirling and to pull the slow dancers closer. There is no envy for other genres here, or even other regional influences in country music. Weldon Henson and the Honky Tonk Frontier Band are Texas country front to back, with plenty of steel guitar and fiddle to get your country music juices flowing, while not being afraid to tell a story.

Originally from Humble, TX near Houston where he started singing, playing piano, and sawing on the fiddle at an early age, Weldon Henson joined the Air Force for a few years, and it was during his time in the service where his passion for country music clicked while learning to play guitar. He perfected the instrument by playing the songs of Hank Williams and Johnny Cash, and found a deep connection to the music. After finishing his service he moved to Austin, TX and never looked back. 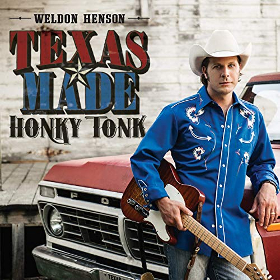 Texas Made Honky Tonk is Weldon Henson’s fifth record in the last 10 years, and over this time he’s yet to deviate from the strong influence of Texas honky tonk that infers his well-written original songs. Where perhaps some artists get bored with the pure country approach, or pursue rock & roll dreams by chasing trends, Weldon Henson keeps his eyes straightforward. Sure, he probably wouldn’t pass up an opportunity to become widely popular beyond Texas, but he damn sure isn’t going to change his sound, style, or approach to do it. If you want to know what the pure, uncut sound of Texas honky tonk is, listen to Weldon Henson and Texas Made Honky Tonk.

The phase Telecaster and prevalent steel guitar of the opening song “Love’s Little Lies” sucks you right in, and immediately you feel at home in the warm, twangy sounds of this record. To be honest, the first portion drags a little bit with a lot of slow and mid tempo songs, even though you can appreciate the songwriting of tracks like “The Heartache’s On Me” and “No Turning Back.” This is sometimes a problem with straight-down-the-middle country when it becomes almost too severe one song after another.

But when you get to “Sleep All Day,” you hear flashes of Dwight Yoakam, and your blood gets pumping once again. Henson keeps it going with “Are You Thinking Of Me Too.” Both the the hoedown intro and the lyrical acrobatics of “Next Time I’ll Be Prepared” make it one of the best tracks on the record.

If you ever head down to central Texas and want to take in the local flavor of Texas country, don’t chance your luck to ambling down 6th Street in Austin and hoping to stumble onto something real. Take a look at the live schedule for Dale Watson if he’s in town, Mike and the Moonpies perhaps, or Weldon Henson, who embodies all that’s right and real about honky tonk from the Lone Star State.