This is an important album. It is important for the burgeoning country scene in Michigan. It’s important for Bloodshot Records. And it’s important for all REAL country fans. There’s nothing groundbreaking here, but in some ways that’s what makes it so important. It is straightforward, honest to goodness, good old fashioned country music delivered with no frills, and it’s about time something like this found its way back into “New Release” listings.

For those of you that have Outlaw/classic country leanings, this album has you at “hello.” The album cranks up with the slow droning of a phased telecaster on the Johnny Cash cover of “Bad News,” then the pedal steel kicks in, and you know immediately that this music will fit nice and snug into your country music wheelhouse. 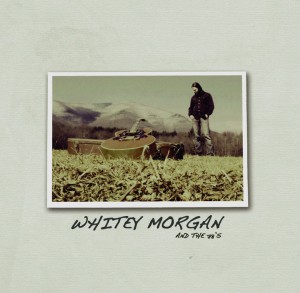 Whitey and the boys do a great job mixing country covers and Whitey originals, and then really making the covers their own. Whitey is a great singer, though you don’t think of him a some super crooner, but on Johnny Paycheck’s “Meanest Jukebox In Town,” Whitey takes his singing to another level, delivering a vocal performance full of vintage flair, and showing an unexpected range and confidence. Dale Watson’s “Where Do Ya Want It,” about an unfortunate incident between Billy Joe Shaver, a bullet, and another man’s face, captures the energy of the Whitey Morgan live performance.

Whitey’s songwriting is not spellbinding, but it is not hokey either like so much Nashville songwriting these days that focuses on turning phrases around on themselves and plots that can be pitched in one sentence to record execs. Instead Whitey focuses on honesty, and relate-able lyrics taken from real life experiences. Songs like “Turn Up The Bottle” and “Hard Scratch Pride” anchor this album in authenticity, and keeps it traditional without working in anachronistic language.

My concern about this album is that it will be too straightforward, too stuffy feeling for some. It is a quality, slick project, but except for a few instances, it traded in the energy of their live shows for the tight, professional recording. More maybe could have been done on the production side: leave the drums off on a song or two, mess with the tempos to separate the songs in mood, find ways to make the songs play to Whitey’s strengths. And though I love their take on Cash’s “Bad News,” such a recognizable cover seems a little odd for an opening track. They could have gone with “Buick City,” which is an excellent original, and the hit of this album that DOES embody their live energy.

Still, I like this album, and I think it is a quality project worthy of the REAL country fan’s music collection. Whitey Morgan and Michigan should be proud.

(The release date is Oct. 12th, and this album will also be available on vinyl.)