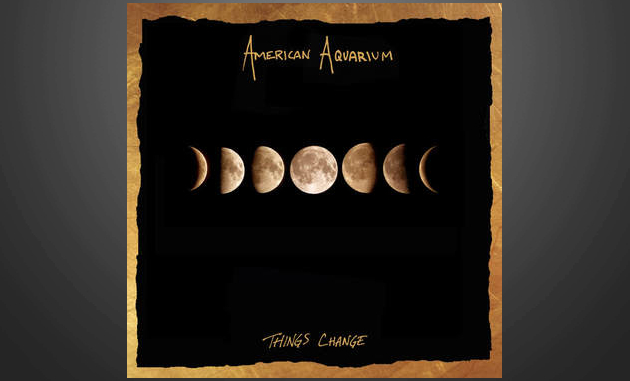 Fans of American Aquarium have known the name of their upcoming album for a while. Now they have the details. Making reference to the fact that the band has gone through a complete personnel change since their last effort, with the only exception being frontman and principle songwriter BJ Barham remaining committed to the original name, Things Change will be a new beginning for the band when it is released on June 1st.

But this is not the situation of a band on the mend backing into an effort to survive. Arguably Things Change sees the 12+ year project by Barham just now reaching its stride ahead of the release of its 7th album. Just signed by New West Records, Things Change will have more muscle behind it than any other release previous from the band, and will also feature a new lineup that has been seasoned on the road and is ready to take American Aquarium on a new chapter.

Oklahoma songwriter and Grammy nominee John Fullbright plays a big role in bringing the new version of American Aquarium to life, producing Things Change, and also playing keys and guitar, and singing on the record in various places. He joins the new lineup of Shane Boeker on lead guitar, Joey Bybee on drums, Ben Hussey on bass, and Adam Kurtz on pedal steel and electric guitar.

The band’s transition is referenced in various songs on the new record. “When We Were Younger Men” is said to reminisce on the simpler days of American Aquarium, and how hard touring can eventually take a toll on a group of musicians. “Things Change” and “One Day At A Time” delve into personal evolution, of which BJ Barham can speak to deeply after making some personal transformations in recent years himself. “The World Is On Fire” is about the current uproarious political climate.

American Aquarium will also be embarking on a tour as part of the release, starting in Tulsa in May where Things Change was recorded.

Though BJ Barham is from North Carolina originally, American Aquarium has acquired a Texas flavor in recent years, being booked by Austin-based firm Red 11, playing many of the Texas music haunts, with Barham becoming a well-respected songwriter in the scene. New member Joey Bybee is known previously for his work with the recently-disbanded Texas band the Crooks, and bass player Ben Hussey and guitarist Shane Boeker are from The Damn Quails.