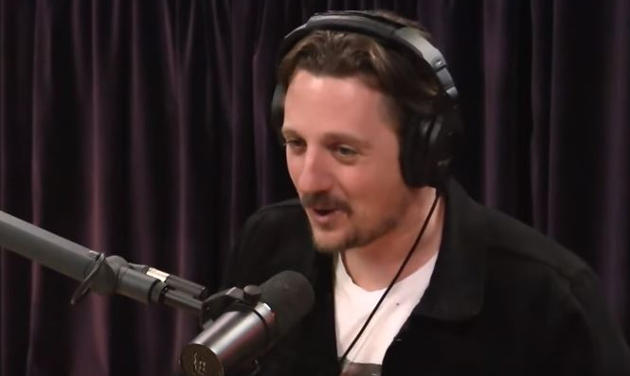 The always elusive and enigmatic Sturgill Simpson stopped by the studio of Joe Rogan in Los Angeles to record a long-form podcast recently, and revealed some interesting tidbits about his musical plans in the coming future both recorded and live.

During the nearly three-hour discussion, many topics were broached, but most pertinent to the music world was the revelation that Sturgill has mapped out a purposeful way he will approach the next few years with recording and touring to make sure he delivers in both theaters to the best of his ability.

“I don’t want to be in the music business,” Sturgill said. “I’m just going to be in the Sturgill business. Because the mechanical timeline of it all, by the time you go in to make [a] record, you’ve been processing and thinking about it so much, for months. I equate it to driving in a really heavy downpour rainstorm for an extended period of time where there’s a mental exhaustion that comes from it, but you have to just keep going. But by the time it’s finished and mixed, you’ve heard this thing 1,000 times. You don’t ever want to hear it again. But now you’ve got to go out and play it on the road every night for a year and a half. So we’re trying to constantly reinvent how to keep that fresh and exciting, while holding the pause button on going over here and recording creatively what you may already be on to.”

“So I realized this year I’m going to take the reigns,” Sturgill continued. “I’m going to play 30 festivals, because those things are always so fun, just to go out and get all the energy in your face. And then we’re going to do probably a double album, and another record. And just record it all so that when I do want to go and do a really big long two-year tour, we have all this new material, and the old stuff to pull from.”

That’s right, we could have a many as three full albums coming from Sturgill Simpson at some point, though the idea appears to be to leave the album after the double album on the shelf for a while. And despite the demand for Sturgill Simpson live being quite high, he seems content to play a more festival-oriented, selective schedule to keep every specific performance special.

“I’d rather go play 30 or 60 shows a year, and know that every one of those was 110%, as opposed to the Tuesday and Wednesday shows to get you to this weekend market where everyone’s counting their checks already, and your exhausted and the shows suffer, and these people paid money,” Sturgill explained. “I just want every night to be great. But for me most importantly right now, the fun is the studio, and the process of trying to push it to get to what’s next.”

Sturgill also revealed that he’s had a pretty famous set of ears listening to what he’s been working on recently.

“Yesterday was probably one of those days where you’re like, ‘Yeah, this is why I do this,'” Sturgill told Joe Rogan. “I ended up going up to Malibu to Rick Rubin’s house, and I was playing him some of this record I’m working on to get some feedback. It was one of those moments  . . . Rick Rubin is all Indian-style on his couch, head banging like a caveman, and he had literally the best sounding stereo system I had ever heard in my life.”

Stugill Simpson also explained that he’s through with social media once again. “I tried Twitter again. I told Jason Isbell I would give it a second shot, but I realized my kids are way more interesting. I would just rather be writing a song or doing something else.”

Simpson was just announced as one of the headliners for Willie Nelson’s upcoming 4th of July Picnic, along with a growing festival schedule for 2018. No word on when new music might be finished or released. You can see the entire discussion below.