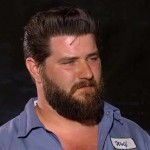 You knew it was bound to happen sometime.

Sporting a squared off pompadour, work shirt, bushy beard, and a mess of tattoos, American Idol introduced Jason “Wolf” Hamlin as one of this year’s contestants on the episode that aired Sunday night. This mechanic-by-trade came in with his “guit-fiddle” (guitar) and sang a “CCR” song (which the well-versed would recognize as Leadbelly’s “Midnight Special”), and then when Steven Tyler asked him to sing another, he sang Johnny Cash’s “Folsom Prison Blues”.

And then the emails started coming, and the chatter raised on various social networking channels Saving Country Music patrols seemed positive for “Wolf” with many saying, “Well hell, if he’s gonna be on there, I may actually watch this year!”

…and now you know why he was featured.

And “Wolf” was not only featured on an audition, he was significantly highlighted on the episode. They sent a production crew to his job as a golf course mechanic, got an in-depth interview with him, etc. I’m assuming all of this stuff happened after his audition. I mean, they wouldn’t go though all that trouble pre-audition unless they already determined he would be a contestant or would be featured, would they?

…and now you know a little more of what’s going on here.

Look, the blue-collar “roots” demographic, though seemingly small because it is traditionally ignored by the mainstream, is in many ways blowing up as a cultural force. American Idol did not “pick” Jason Hamlin, they “chose” him, and specifically chose to make him a significant focus of their episode.

And American Idol isn’t the only one all-of-a-sudden paying attention to the independent roots music world. The shift of the punk culture into roots music is a very real, culturally-significant phenomenon that the greater world is taking notice of. And they are courting the roots fan for the passion and loyalty that are recognized as top attributes of their behavior.

Century Media, a traditionally heavy metal label recently started a roots division for artists like Joe Buck and Bob Wayne. Victory Records, who some will give credit for “killing” punk music, has announced a roots project with so far an unknown specificity. And there’s a pretty solid rumor out there that Kevin Lyman of The Warped Tour and the Country Throwdown Tour is putting plans together for a “roots” version of the annual touring festival, possibly as early as this year. We’ll see.

As for Jason “Wolf” Hamlin, he could be a great thing, or he could be a horrible thing. We don’t know the guy, and we shouldn’t pretend we do, and we should understand he’s just a mechanic at a golf course who likes Johnny Cash. Or is he? And sure, he could be a shill for FOX producers hoping to bring the burgeoning masses of roots fans into the fold. Or, he could be the country music Messiah that I’ve been dreaming of (and Eric Church mocks me for). Or he could dive out in the first few weeks and all this consternation is for naught, unless in the process he actually exposes some kids to some real music they would otherwise not be.

But be wary friends and neighbors. If you reacted positively to seeing Jason “Wolf” Hamlin on American Idol and said “Well hell, I kind of like this guy. I may actually watch this stupid show this year!” just understand that is exactly what the folks in Hollywood wanted you to say.