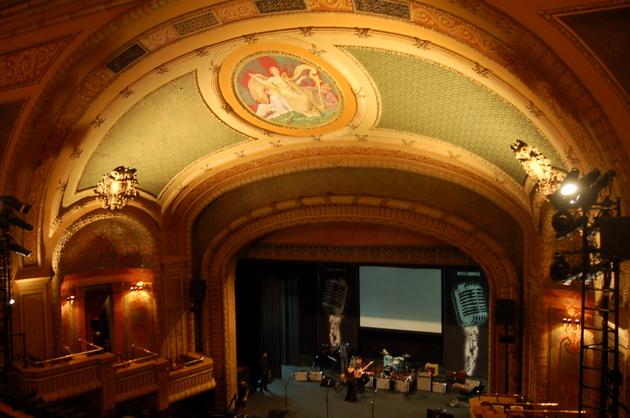 Once again the Ameripolitan Awards, founded by Dale Watson, and championed by many hard working individuals and artists wanting to shine a spotlight on under-appreciated but highly-deserving roots music, was a rousing success, and included memorable performances, a slickly-produced presentation including pre-prepared multimedia vignettes highlighting the history of the music, and one of the best house bands that could ever be assembled.

Moved from a hotel convention hall where it took place its inaugural year to the historic and stately Paramount Theatre in downtown Austin, a gravity that was lacking from last year’s otherwise stellar presentation was now present in the room, and it also facilitated a wider crowd to be able to partake in the festivities. With the expansive seating in the mezzanine and balcony, the event did not go sold out, but it did fill up solidly.

A run down of the night’s entire festivities including winners can be found on the LIVE blog, but some of the highlights were performances by Rosie Flores who was dubbed the “Queen of Ameripolitan” after walking away as the biggest winner at the inaugural ceremony in 2014, Amber Digby and The Cactus Blossoms putting on excellent performances, Ray Benson playing “Miles and Miles of Texas” with the entire crowd singing along, the amazing Gloria Miers of the Legends of Western Swing Festival coming out to accept her award, and Dale Watson singing Merle Haggard songs with guitar legend and Ameripolitan recipient James Burton.

Unfortunately it was difficult night for the press to cover, as an appropriate location really hadn’t been cordoned off to accommodate some who had come even from overseas for the event, but it’s somewhat understandable in such an old theatre and with such a big audience in attendance. However one oversight that was completely predictable, and highly inappropriate was the appointment once again of SiriusXM DJ Mojo Nixon as the Master of Ceremonies.

Last year Mojo Nixon came out and immediately established that hard cussing was going to be a seminal part of the presentation. “I’m hotter than two foxes fucking in a forest fire!” he screamed, and then started making light of the fact that he was cussing by more cussing. With the amount of older patrons, and straight-laced country fans in the audience, I have to say I was really surprised the decision was made to take the presentation in that direction. But this was Ameripoiltan’s maiden voyage, and I was willing to see where it led before passing judgement on the Mojo Nixon involvement, or anything else.

As the night proceeded, the cussing became even more pronounced if that was at all possible, until you felt folks were cussing just because they felt they could. Mojo had opened the floodgates, but then Dale Watson, the presenters, the performers, everyone was letting the swear words fly as if there weren’t children, the 80-something widow of Ralph Mooney, and many Christians in the audience. It was like they were completely misjudging their own Ameripolitan demographic.

During and after the inaugural Ameripoitan show, Saving Country Music, simply by reporting on the festivities, received many complaints from patrons about the cussing, and from what was understood by the Saving Country Music camp, it had become a big controversy post-presentation. Dozens of people, many whom had paid good money and donated to the crowdfunding effort were very displeased at the disrespectful tone the presentation took as time wore on.

While reporting from the event, I had made an audio recording with a handheld device simply for my own reference. But in lieu of a broadcast or recording, I asked if I could post it online for folks who couldn’t make it to the event in person. I was told by the Ameripolitan publicist that under no circumstances should I post the audio because all of the hard cussing had angered sponsors, some of the most high-tone donors, and many others in the crowd, and it was a controversy they were trying to douse.

That’s why this year I was greatly surprised to see Mojo Nixon named once again as MC, along with SiriusXM’s Elizabeth Cook. But maybe they had told him to tone it back. When Mojo took the stage for the 2015 show, if anything, he ratcheted the inapropriate language up yet another notch. It was one “fuck” and “motherfucker” after another delivered with absolutely no affiliation to what was actually happening with the awards, including many of the same canned lines recycled from the previous year, specifically the “I’m hotter than two foxes fucking in a forest fire!” line.

We’re not talking George Carlin here. Mojo Nixon presented himself an ignorant, indolent blowhard, uncaring of anyone else’s ideas of what was appropriate in the presentation, completely unknowledgeable of the crowd he was speaking to, and simply machine gunning out cuss words from a lack of anything of entertainment or intellectual value to shovel out of his sewer hole. On multiple occasions you could physically count the people leaving their seats for good with their possessions in hand halfway through the presentation after being abhorred by Mojo Nixon.

Making it one level worse, Mojo taunted anyone who may have trouble with what he was saying. “They told me not to say fuck, but fuck those motherfuckers.”

And frankly, I’m not even sure if Mojo Nixon is to blame. The Ameripolitan organizers knew what they were getting involved with, especially after last year’s performance. For all the rhetoric about respecting the roots of the music, if you have absolutely no clue who makes up your demographic to be so blinded to how the actions of one blowhard craving attention could be so damaging, then it brings into question the level of respect of the roots that is truly present. Blake Shelton would have been a more appropriate emcee than Mojo Nixon and his big bag of nothing.

And to make matters worse, he was awarded with the Ameripolitan DJ award, which he quickly stuck between his legs like a penis, and started prancing around stage with. As a 14-year-old boy I would have been turned off by Mojo’s level of maturity, and the only reason, the only reason, I did not shout Mojo down from my humble perch in a mezzanine-level vomitorium after Mojo vamped for 30 seconds with nothing but rehashed cuss words like a adolescent boy enamored with himself from the foulness coming from his mouth, was out of respect for Dale Watson and the Paramount Theatre.

Whatever good Ameripolitan has been able to sow through their two awards shows, it has been docked in two measures by Mojo Nixon’s involvement. It is beyond all that such a gross miscalculation and oversight was made by bringing him back. But this is one of the concerns you see about Ameripolitan, that it’s a club of the “who you know,” and since SiriusXM seems tied at the hip to the organization, Mojo Nixon seems to be bulletproof in their eyes, with plenty of people to rally behind him and make his detractors out as prudes who just don’t understand. I can’t speak for Mojo’s radio show, and that’s one of the things about SiriusXM that can be so frustrating, that everyone who has SiriusXM just assumes everyone else has SiriusXM and is up to speed on all the doings there. But Mojo Nixon as a master of ceremonies brings a sum negative to the table that will have long-term caustic consequences to Ameripolitan cause.

And I’m sure Mojo or some others will chuckle to themselves, or say that Mojo’s involvement is paying off in spades because it keeps people talking, but Ameripolitan is not on sure enough footing to be working under these speculative pretenses. The name is too controversial, the scope is too narrow, and Dale Watson himself is too polarizing to be giving detractors such easy fuel to their fires. Really, a lot of this concern comes down to money. If the donations and other efforts by individuals are going towards something that is inappropriate, then maybe there is a more appropriate avenue for those funds aside from an awards show hijacked by a blowhard personality.

I, as the proprietor of Saving Country Music have nothing but respect for Dale Watson, and anyone who takes up the cause to shine a spotlight on worthy roots artists, no matter what the approach is, and I commend Ameripolitan and everyone involved for their efforts. Mojo’s inappropriate behavior should not overshadow all the positive from the event, but the simple fact is that it did for many many folks, and it has hurt Ameripolitan by a measurable degree moving forward.

And if Mojo Nixon and Ameripolitan want to laugh this all off again, and no doubt Mojo has a bigger bullhorn than Saving Country Music, then so be it. But it will be at the expense of all the excellent artists and hard working behind-the-scenes folks who put their heart and soul into this effort. It is a shame it takes someone having to address this issue so publicly, but apparently the dozens, maybe hundreds of complaints about Mojo have so far gone completely unheard. This is not about Mojo Nixon or even cussing. It’s about knowing who your people are, and showing them respect.

The goal of any awards show is to produce moments that people will remember for years to come. The inaugural Ameripolitan event had more of these moments than you can count. The 2015 awards had a few of them as well. But the involvement of Mojo Nixon really sullied the experience for many of Ameripolitan’s most fervent champions.

***UPDATE (5:45 PM CST): Dale Watson has posted on his Facebook page this afternoon:

That said, it did provide us with more lessons on how to make next years show even better. ( put the Ameripolitan house band members name in the program )…….
We want to thank Sirius/XM’s Elizabeth Cook and Mojo Nixon for hosting this year and all the support they’ve given Ameripolitan Music since it’s birth. So what’s the big news today we would like to share??
We are VERY proud to announce our host for the 2016 Ameripolitan Award Show………Mr……………………………………………