And Now Country Music and Mass Shootings Will Be Forever Linked 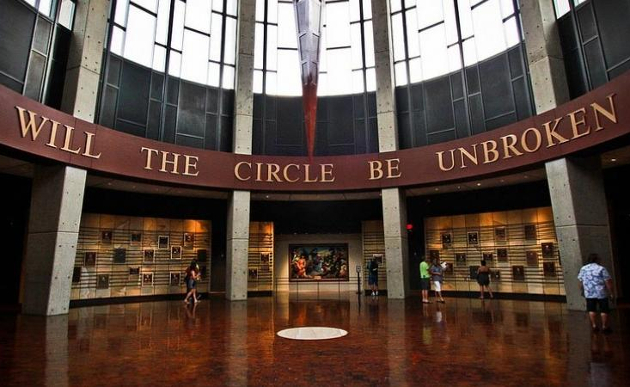 There is something very distinctly American about the mass shooting, isn’t there? It’s like apple pie and Chevrolet pickup trucks, just not as wholesome, obviously. Though there are cultures and countries throughout the world that are decidedly more violent and more unsafe to inhabit, there is something interwoven into the very fabric of American society that compels certain individuals among us to take up arms, often against innocents, as a vehicle for self-righteous anger of such pureness, it even overrides concerns for self-preservation, let alone any legal recompense that might await the actions.

Of course statistically, these psychopathic individuals number in such an extreme minority, it is hardly fair to characterize the behavior as prevalent. But when blood spills so often and with such horrific results, it still feels like an issue of epidemic proportions, while the mass murderers themselves approach the enterprise almost like a skills competition, attempting to outdo the statistics of those who’ve come before them, fueled by the media and public who thrive off of rubbernecking at the sheer numbers.

The American democratic frame of government has resulted in the most prosperous, opportunity-filled society the world has ever seen, and it often exports that prosperity in inspiring ways throughout the world, despite the obvious blemishes and blunders throughout history, and certain segments of the forgotten in society. But there is a fundamental flaw in that design that allows a certain unrequited anger to bubble under the surface, born from envy, and an inane sense of equality that somehow an injustice must be righted, even if it means collateral damage inflicted upon disinterested third parties, or the taking of innocents—while a sense of glory awaits them in the afterlife.

And ironically, all of this is fueled by the polarization of ideologies that wish to save us from such acts, which has become increasingly prevalent as the 50/50 bisect of American society has made conflict and lack of consensus increasingly common. We all condemn such heinous acts like the Las Vegas attack, but love to lay the blame at everyone’s feet but our own. Oh, why do we need such guns in society some proclaim, while others use the incidents as evidence that society needs to be more armed. What’s the point of passing laws criminals won’t abide by anyway, especially ones on suicide missions? While obviously a course of inaction certainly won’t solve anything, and is responsible as anything for getting us to this point. Often it’s not about who is right, but via guilt, individuals wanting to tell themselves they’re not wrong by blaming an ideology counter to their own.

America instills envy and anger in individuals institutionally, and from a tender age. Just look at public schools with homecoming queens, popularity contests, and the implementation of an unspoken caste system via governmental institutions that sift individuals into certain sects, and then preordain their success, failure, popularity, and importance in society. This system creates eddys in culture where certain souls get lost, and with a sense of depravity and a feeling of hopelessness, the only way they can equalize their plight with society is by bringing everyone else down in the pit of suffering they exist in.

Shooter Stephen Paddock didn’t target the Route 91 Harvest Festival in Las Vegas despite it being a place where people gathered to enjoy music together and have a good time. He did it because of that. It was the perfect target to expend unresolved, and unextinguishable anger—an anger so incredible, death was preferred over any other resolution, or the only one available.

Country music will go through a trying time in the coming days and weeks as many will assert (and already have) that a country music festival either deserved such a fate, or at the least, is somehow complicit from its generally conservative listenership, and strong relationship to hunting and guns, especially Jason Aldean who was the performer on the stage when the rampage started, and is the beneficiary of high-profile hunting and outdoors endorsements.

But nothing will be done either way, despite the huffing and puffing of pundits. Society is too polarized and gridlocked even to get the streets repaved, let alone tackle the serious, difficult-to-solve issues plaguing society that individuals are unwilling to shoulder any portion of the blame for, and instead sift that blame towards the feet of their adversaries.

But there’s no running, and no hiding. At some point, the issue of mass murder will find you. You will know someone, or know someone who knows someone who has been touched by the grief and perplexity of why someone would decide to take the lives of other en masse, and for either no apparent reason, or a reason that makes no sense to us. Country music now knows this to be true, as so many of its biggest fans and top performers stood right in the crosshairs Sunday night.

Tragedy has always been part of the country music narrative. From the death of its first superstar at the age of 29, to plane crashes and other calamities. But now it was the venue for the largest mass shooting in modern American history. If it wasn’t so tragic, one might venture to call it fitting. Because there’s nothing more American than country music, except perhaps a mass shooting.