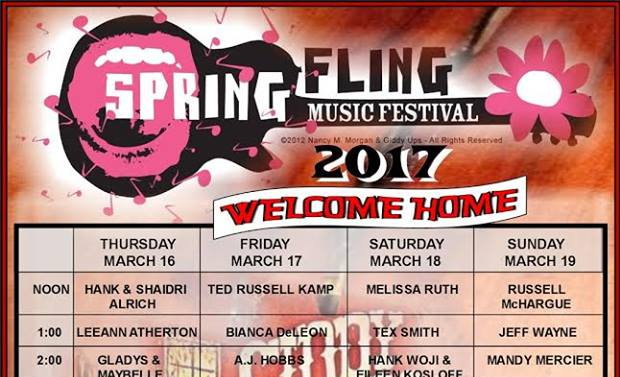 You won’t find the residents of Reno or Las Vegas in the massive downtown casinos that attract tourists like those old-school blue light bug zappers hanging from the front porch. Instead if they go out, you’ll find them in the old gambling halls and hole-in-the-wall joints where the payouts are more profitable, and the atmosphere is more authentic.

Similarly, during Austin’s annual music festival and conference called South By Southwest, the vast majority of local residents avoid the madness it brings to the city like the plague. For many in Austin, they don’t go to SXSW, SXSW comes to them whether they like it or not. But that doesn’t mean they don’t take the opportunity to participate in the music, and celebrate the local scene that once was about local talent with international appeal, and has now unfortunately become about peddling corporate brands like McDonald’s and Mazda with music as an excuse.

On the periphery of Austin are numerous unofficial showcases that either look to take advantage of all the talent that flocks to the city during SXSW, or to offer a more healthy alternative to the madness inside the SXSW blast zone by re-imaging the original idea of SXSW with a local perspective. One such event is called the Spring Fling, hosted by A. Michael Uhlmann, a native of Switzerland who moved to Austin over 25 years ago to cover Austin music. Held at the authentic local honky tonk called Giddy Ups south of town in an area called Manchaca (pronounced “Manshack” by locals), the Spring Fling tries to embody what Austin music used to be. 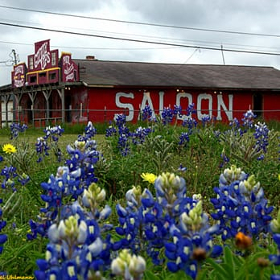 “The origins of it are a party I actually used to have at my house,” explains A. Michael Uhlmann. “It was 1997 when I started the first one. One of the reasons was because on the Sunday after South by Southwest, nothing would be happening anyway, and I had all these friends in town from Europe. So I had them out at the lake, and all the bands were playing under a 500-year-old oak tree, and we would barbecue, and just have fun with music playing. I even had a local television station come out and report on it and kind of say, ‘This is how South by Southwest closes.'”

It was called the Decompression Party—to decompress from South by Southwest, and it became the unofficial/official afterparty of the annual gathering. Before then, there were no alternatives to SXSW, and nobody really knew what an unofficial SXSW event was. Today a majority of the events that occur around SXSW could be considered unofficial. The Decompression Party also drew the ire of SXSW organizers who early on tried to enact restrictive control over the event—an issue that still persists about SXSW today, and has ironically fueled non-sanctioned events as opposed to restricting the event’s scope and growth.

“There used to be a writer for the ‘Austin Chronicle’ named Jerry Renshaw, and he came to one of my parties, and he wrote about it,” A. Michael Uhlmann says. The Austin Chronicle is owned by SXSW. “At the time I had my credentials for South By Southwest as a journalist. The next year, I was denied the badges. I guess that’s when you’re an alternative. Obviously they simply got pissed that I had a party at my house and got media coverage for it. That’s how South By Southwest closed, with people dancing on the lawn of a private house. It didn’t work for them I guess. Then came the big boom, and everything became commercialized, and the parties started sprouting everywhere.”

A. Michael Uhlmann came to Austin for three months during the summer of 1989 to check out the Austin music scene, and ended up moving to Austin permanently in December of 1990. He was a DJ for the Swiss Broadcasting Corporation, and had a show called the Lone Star Cafe. He was also a writer for newspapers and magazines, working as a foreign corespondent reporting back to Europe about Austin music.

“My first apartment was $325 dollars a month,” Uhlmann says. “All of my musician friends lived in Travis Heights (now the most expensive part of Austin). I had the local TV feature me on the 6:00 news as a European who reports on the Austin sound, and at that point that was still a story. There was no internet at the time, and my phone bill would be $600 a month calling back to Europe to report.”

Like many of the refugees of SXSW’s massive growth in the 2000’s, A. Michael Uhlmann was looking for an alternative and decided to start an event of his own.

“In 2008, I put in an afternoon on Sunday at Giddy Ups to kind of replicate my Sunday party,” he says. “I had a Norwegian band. I had the Band of Heathens who were new at that point. The owner of the bar [Nancy Morgan], she knew what South By Southwest was, but she didn’t know what to do with it. I booked what was really the first Spring Fling in 2009, and we had 65 acts in five days. It’s not overrun like downtown. On Sunday, it’s basically local people who play Giddy Ups on a regular basis.”

The 2017 Spring Fling will feature plenty of local talent, as well as some names known nationally such as Ted Russell Kamp, AJ Hobbs, and Silo Road (from Austin). John Conquest, who was the owner of 3rd Coast Music and passed away in 2016, was also an important part of the Spring Fling. “In 2008 when I put the 65 bands in, I started working with John. He was an important part of the event.”

Giddy Ups, like what is left of Austin’s authentic local bars and honky tonks, is a place where the true essence of Austin music can be found.

“For me, Giddy Ups is a dying breed,” says A. Michael Uhlmann “The true essence of what real music is and how music interacts with people, it is getting lost. Austin used to be full of places like that. It is what a bar or a music venue should be, which is neighbors coming out to see other neighbors. But the reputation is where people even from outside of Texas or the U.S. come to Austin and go to Giddy Ups.”

The Spring Fling runs from Thursday to Sunday, featuring music from noon to midnight. Giddy Ups is located at 12010 Manchaca Rd, Austin, TX 78748.

**Grant Maloy Smith got stranded in the snowstorm, and Craig Marshall will fill-in. 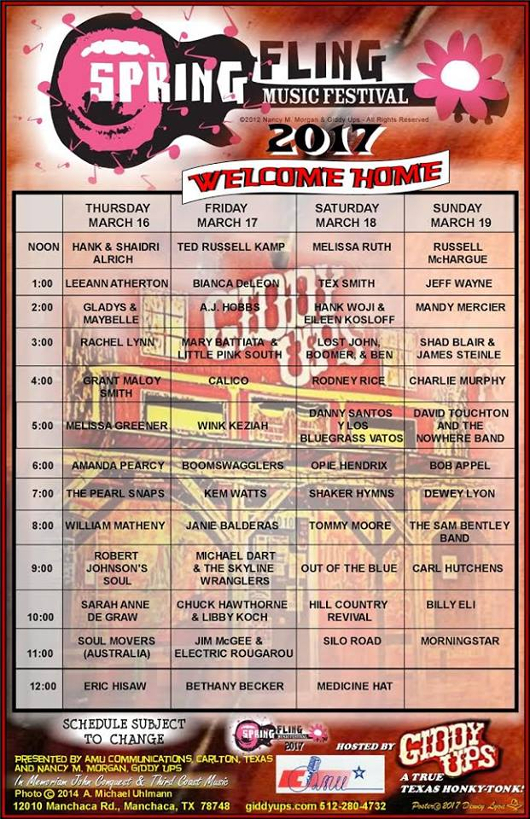