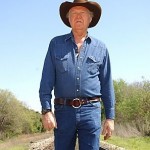 Texas country music legend Billy Joe Shaver will receive a lifetime achievement award nicknamed the ‘Rusty’ on November 17th. The award is named for another Texas music legend, Rusty Wier, and is being bestowed by Love & War in Texas.

Scheduled to appear and perform at the ceremony are some more Texas legends, including legendary member of the Lost Gonzo Band and the man who penned the original Austin City Limits theme “London Homesick Blues” Gary P. Nunn. Add Tommy Alverson, Mark David Manders, and the Tejas Brothers to the lineup as well. It is also tradition for the performers to ‘roast’ the honoree.

The first Love & War Lifetime Achievement Award was given to Rusty Wier on Nov. 23rd 2007 in an event that also was a benefit for Weir who was battling Caner at the time (read about the event). Over $10,000 was raised to help with Rusty’s medical expenses. Wier died last year, but not before bestowing the second award to his good friend Tommy Alverson. The third recipient of the ‘Rusty’ was Gary P. Nunn.

Love & War in Texas is a music venue and restaurant created by Tye Phelps and Travis Shull to help preserve and promote Texas heritage. Phelps says the Love and War Lifetime Achievement Award was created to honor a prominent Texan every year, for anyone who spends their life time contributing positively to Texas. The event will be held at the Plano, TX location. There’s a Love & War in Grapevine, TX as well.

At the moment Billy Joe Shaver is not scheduled to perform. He is currently undergoing intense physical therapy to rehab an ailing shoulder.