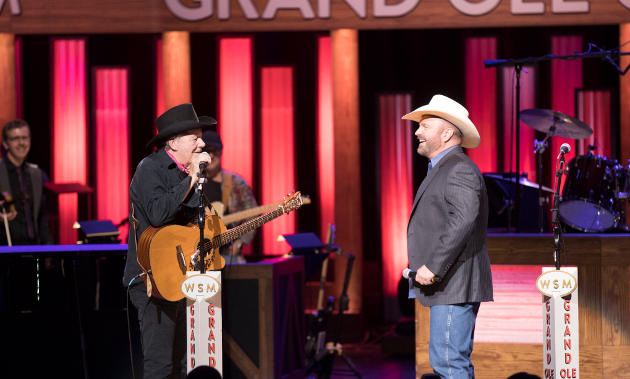 The original Outlaw and Country Music Hall of Famer Bobby Bare will be the next member of the Grand Ole Opry, again. This is the news coming out of Nashville Saturday night (4-7) after Bare was invited to join country music’s most historic institution. He was officially invited by Garth Brooks, who shocked the Opry crowd when he took the stage.

“I’ve got to tell you that this is quite a surprise. I was a member of the Opry for 10 years, but then I just drifted away,” Bare said, who was also celebrating his 83rd birthday. “Thank you to everybody on the Grand Ole Opry.”

Jeannie Seely was hosting the Opry segment when Bobby Bare was surprised with the invitation. Bare started his set by collaborating with Mary Gauthier on the song “I Drink,” written by Gauthier. Then Bobby Bare, Jr. joined his father on the stage to sing the 1970 hit “Come Sundown.” This is when Garth Brooks took the stage.

Obviously, Bare accepted, and finished his set by performing his No. 1 hit “Marie Laveau.”

Opry General Manager Sally Williams says of Bare, “Bobby Bare enjoys an incredible relationship with all of the Opry artists as well as the Opry staff. He has supported the Opry with visits often over the past few years, and he’s always a crowd favorite. We are so excited to officially welcome him back to Opry membership. Our members are the heart of the Grand Ole Opry. We rely on the commitment of these tremendous artists who play a wide variety of country music and are in different stages of their careers to ensure the Opry will be vibrant and entertaining for future generations of fans.”