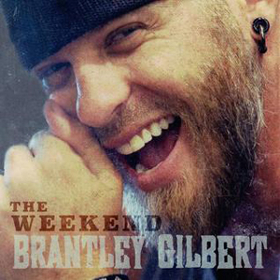 Can someone start up a Go Fund Me campaign to help Brantley Gilbert surgically remove the marbles out of his damn mouth? By golly I can’t understand a word this dude says. Brantley’s about the best case I’ve ever seen for someone’s self-absorbed, too-cool-for-school attitude translating into a debilitating speech impediment. He’s too laid back and ragingly awesome in his own eyes to even sound out his freaking words.

Actually on second thought, after pulling up a lyric sheet on this audio turd, it’s probably best if the lyrics remain virtually indecipherable. Just go ahead and make up your own rhymes to this tune on the fly. They can’t be any worse than the original ones, trust me. All truly comprehending the awfulness of “The Weekend” will do is anger the blood.

We need a weekend from Brantley Gilbert’s douchebag attitude and this residue of Bro-Country that won’t let go of country music’s hoof like a determined lump of cow shit. I thought the mainstream was over this and everyone was acting like Justin Timberlake now, but I guess we can’t be surprised if Brantley Gilbert reveals himself as a one trick pony stuck in a rut. “But Trig, Brantley has some good songs!” Yeah from when? Fucking 2007? Every Brantley Gilbert single has sounded exactly the same for the entirety of his career.

The lyrics for “The Weekend” were phoned in by Brantley Gilbert, literally. He wrote the song with some guy named Andrew DeRoberts over the phone, and Brantley admits he’s never even met the dude in person. Talk about synergy and collaboration, that shows you the type of heart these two brought to this paint-by-the-numbers, festering, steaming pile of audio animal refuse. It’s like when Jason Aldean recorded a tribute to Joe Diffie but had never met the dude, or even sent him a text message. Writing this shit is so easy, you can do it with the phone pressed against your cheek, tying your shoe, scratching your ass, while waiting in the drive-thru line at a Krystal.

“Yes, girls in bikinis, tailgates, jacked up trucks, summertime, moonlight, check check and check. I’ll have a #2 hold the onions.”

That’s basically what you get with “The Weekend”—monster übercliches delivered in Brantley Gilbert’s signature mush mouth with a banjo thrown on top of the mess to make it “country.” Then get some Joe Satriani-sounding asshole to come in and play a wank off guitar solo, cut the second verse off halfway so you don’t scare the crowd by making them think too much, and run through the chorus three more times before making it in at a radio friendly three minutes.

I’m sure Brantley was patting himself on the back for figuring out how to work “wake and bake” into the lyrics. Anyone with half a brain would need a strong vape from some of Willie’s Reserve to make it through this monstrosity, and once again for all of Brantley Gilbert’s marketing about being sober and a devout Christian, he sure leans heavily on innebriants in his lyricism. Brantley Gilbert confirms what I figured out long ago in high school: the church goers have the best drugs.

And I hope Gilbert got a handsome check for his Yeti shout out. That’s exactly what the blue collar listeners of “The Weekend” need to hear. As if they don’t blow enough of their paychecks on lift kits and tribal tattoos, get them interested in $800 beer coolers. It’s this exact type of consumerism run amuck that “The Weekend” speaks to and looks to perpetuate with its self-affirming lyrics. Sure your life sucks, but as long as you can get shitfaced over the weekend, no reason to self-reflect and make some sort of change where you pursue happiness all seven days of the week.

Though it’s hard to think of Brantley Gilbert as anything but a new school, Johnny-come-lately with a shallow talent reserve, he’s actually the mainstream’s version of a grassroots artist. Brantley Gilbert’s fans will follow him into a methhouse fire, and his singles have never done super great save for “Bottom’s Up.” So if he truly wants to be respected as a songwriter and an artist of more substance like his devotees demand he should, why even release something like this? Pass this off to Chase Rice and put out one of those great songs we’re always hearing about, but never actually hear beyond being buried on the back end of an album.

Now would be the right time to put out some better music since that’s where the momentum is taking us—not songs about tan legs and jacked up trucks. Even Florida Georgia Line and Cole Swindell are at least trying to get with the program. Meanwhile Brantley’s out here still braying about tailgates like it’s 2011.

If you live by the checklist song, you die by it. And as one of its early inventors, it appears Brantley Gilbert isn’t ready to give up the sauce just yet. Best of luck buddy.