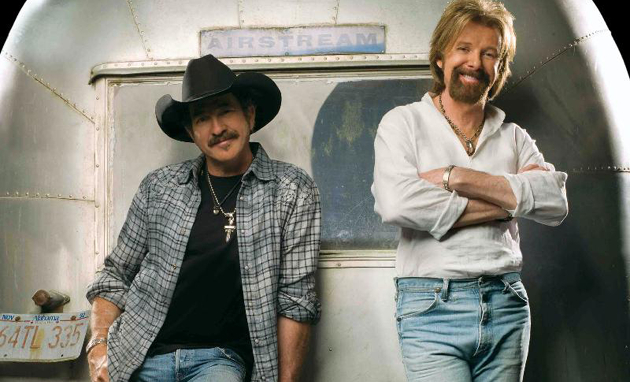 Brooks & Dunn will be the newest inductees into the Country Music Hall of Fame in the Modern Era. This was the news coming out of the press conference held Monday morning (3-18) in the Hall of Fame rotunda in Nashville. WSM broadcaster Bill Cody made the announcement, filling in for an ailing Reba McEntire.

The other 2019 inductees announced were Ray Stevens in the Veterans Era category, and Jerry Bradley in the Non Performer Category, joining his father Owen Bradley and uncle Harold Bradley as Hall of Fame inductees.

“It’s beyond an honor to be here, it hasn’t soaked into me, and it probably will at some time when I’m off by myself, I’ll have an emotional moment for sure,” Ronnie Dunn said to the assembled crowd.

Brooks & Dunn was a commercial powerhouse duo in the 90’s if there ever was one, and is the most commercially successful and award decorated country music duo of the modern era. The pair’s first album Brand New Man sold 6 million copies, and they won the CMA for Vocal Duo of the Year every year but one between 1992 and 2006—a historic feat. In between then they also racked up 20 #1 singles, including widely-recognized standards of country music such as “Brand New Man,” “Neon Moon,” “My Maria” written by B.W. Stevenson that went on to be the biggest song in all of country in 1996, and “Ain’t Nothing ‘Bout You” that was the biggest song in 2001. They also had 19 more Top 10 singles.

Both Kix Brooks and Ronnie Dunn were vocalists and songwriters signed to labels and had charting singles before officially forming the duo in 1990. Kix Brooks had also written #1 songs for the Nitty Gritty Dirt Band and Highway 101 among others. By 1991 they were signed to Arista Nashville, and quickly took advantage of the vacancy of a major country music duo as the genre’s “Class of ’89” (Garth Brooks, Clint Black, Alan Jackson, Travis Tritt) took country music to new commercial heights. Eight of the duo’s 10 studio records are Certified Platinum or better.

The success of Brooks & Dunn is not debatable, but the name is often brought up as an example of a label project that had lots of hits, but questionable influence beyond the charts. Often the contributions of Brooks & Dunn is overshadowed by the more overwhelming success of Garth Brooks and the other members of the Class of ’89. What likely helped the duo in Hall of Fame consideration is Kix Brooks’ recent efforts on syndicated radio with a countdown show has kept him in the public eye and close to the industry. Ronnie Dunn has launched a solo recording career.

Brooks & Dunn will also receive an additional boost this year from their Reboot project pairing them with a bunch of today’s stars in re-recordings of some of their biggest hits. This likely helped put their name and legacy back in front of Hall of Fame voters right as final ballots were being cast. They were already set to receive a dedicated exhibit in the Hall museum come August.

Brooks & Dunn officially disbanded in 2010, but reunited in 2015 to play shows opening for Reba McEntire, and now make appearances together on a semi-regular basis. The duo will be officially inducted into the Hall of Fame later in 2018 in the annual Medallion Ceremony.