Caitlin Rose Gets Arrested in “Only a Clown” (Song/Video Review)

Oh, what has gotten into our sweet little Caitlin Rose? Chain smoking, bad karaoke, stealing a mirror ball, driving drunk with expired registration, and the always smooth move of videotaping the whole caper so it can be used against you later in a court of law. I will give her credit for telling the occifer she was in country music because Johnny Law looked like a Tim McGraw fan, though I think we all could agree Americana would have been a more appropriate identifier for Caitlin. Or maybe she could have distracted the officer by engaging him in a repartee about the illegitimacy of modern genre names. Trust me, nothing can get someone unnerved quicker than genre talk.

Occifer: You play music? What kind of music?
Caitlin: It’s really interesting that you would ask that…. 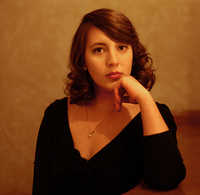 The only thing better than a Caitlin Rose song is a Caitlin Rose video. Then again I lost all objectivity long, long ago when it came to judging this girl. She could serve up a flaming cowpie and I’d be twisting words around to convince you to drop .99 on it at iTunes. I’ve been compromised by Caitlin’s spellbinding ability to embed the most sincere, most deep personal emotions into her music. Her songs claw mercilessly at your empathy. In fact, it really doesn’t matter what a Caitlin Rose song or video is about, I’m watching it on repeat six times while my dinner burns.

The video for “Only a Clown” is executed with great vision by Michael Carter, resurrecting the VHS format for texture and capturing the thin line between fun and forlornness that accompanies the freedom of the 20-something existence. Co-written with Gary Louris of The Jayhawks, “Only a Clown” takes a broody look into the awkward loneliness that social interaction can breed, but with an upbeat, full sound. “I guess it’s about the person who doesn’t have any fun at the party, but still sends you a thank you note,” says Caitlin.

Caitlin Rose’s new album The Stand In will be available on ATO Records on March 5th, but you can stream the entire damn thing at The Rolling Stone right now, even if you’re over the legal limit.

Stay safe out there kids.

Caitlin Rose, Only A Clown, The Jayhawks, The Stand In