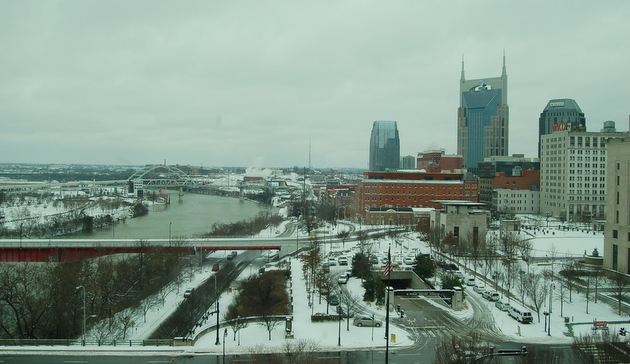 Scene from the courthouse in downtown Nashville.

Despite five to six inches of sleet and snow in the Nashville area, and most government offices remaining closed including the municipal courts, the court of Judge Steve Dozier was open to proceed with the Wayne Mills murder trial. Judge Dozier is known for opening his court no matter what the circumstances. The court came in session at roughly 11:00 a.m. after a weather delay.

With the prosecution resting on Wednesday afternoon, Thursday’s proceedings began with the defense calling its witnesses. The first witness called was an individual subpoenaed by the prosecution but not called, 24-year-old Nadia Markum. Nadia was the girlfriend of musician T.J. Howard. Markham, T.J. Howard, and Howard’s manager Susan Branham were the three witnesses that left the Pit and Barrel bar right before the shooting. Nadia Markham had been dating T.J. Howard for roughly three or four months at the time.

Nadia Markum testified that the party of three arrived at the Pit and Barrel bar at roughly 3:30 PM for the after hours party. Nadia said on a scale of one to ten, both T.J. Howard and herself were an “eight or nine” as far as drunkenness. Susan Branham was the sober designated driver. Nadia mentioned that Jamey Johnson was at the Pit and Barrel bar that night—the first mention that he may have been there. But there’s no other record of Jamey Johnson attending the party. Neither the prosecution nor the defense challenged that Jamey Johnson was there. Nadia also said she had never met Wayne Mills until that night.

Nadia Markum testified that for most of the time at the Pit and Barrel, her and T.J. Howard mostly kept to themselves. At one point they went into a bathroom and had “relations.” She then testified that Wayne Mills and Chris Ferrell were yelling at each other right before she left, but that she didn’t remember the specifics on the argument because she was drunk. She did remember Wayne Mills throwing down a glass and it being “very loud.” Right after they left the Pit and Barrel bar, she’s remembered hearing three shots. She never saw Wayne Mills outside the bar.

After Markum, T.J. Howard, and Susan Branham drove away, Susan called Chris Ferrell on the phone. They spoke on speakerphone for four minutes, but Markum didn’t remember much of the conversation beyond Chris Ferrell being “hysterical.” They came back after about ten minutes and parked “a block or two away.” Then then walked up to the bar to talk to the police.

It was also revealed through Nadia Markum’s testimony that in the days after the shooting, Chris Ferrell stayed at Susan Branham’s house briefly.

During cross examination of Nadia Markum, Assistant District Attorney Wesley King explained that when being interviewed by police, Markum said, “All that Wayne Mills did was smoke a cigarette.” She also said to investigators that Wayne Mills was trying to leave when he was shot.

Nadia Markum on the Witness Stand: 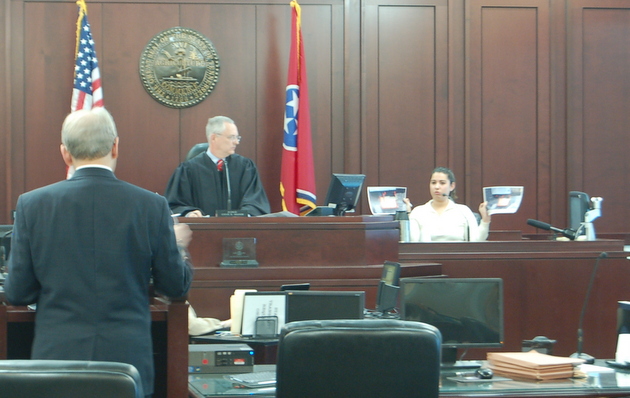 Then the defendant Chris Ferrell took the stand. He first explained that he had known Wayne Mills for about ten years, and had opened the Pit and Barrel bar in January of 2013. He borrowed money from his parents to open the bar. He did not attend the George Jones tribute concert earlier on the night of the shooting, but went downtown to another bar called The Palm near the Bridgestone Arena. There he met up with Nadia Markum, T.J. Howard, and Susan Branham. They then went to the Full Moon Saloon and met up with Wayne Mills and watched Shooter Jennings perform. “Shooter became a friend of mine over the years,” said Ferrell.

Ferrell testified that he had “maybe three” drinks at the Full Moon Saloon, and “maybe one” at the Pit and Barrel. He also explained that he purchase the .22 pistol used in the shooting at a gun show, and had the pistol, and a .45 revolver at the bar “for self-defense.”

Chris Ferrell testified that he noticed a mood changed with Wayne Mills when he heard Mills shout, “I can’t get a cab. There’s no whores, and no fucking cocaine here. Why am I here?” At the time, Ferrell was walking around the bar and turning the lights out to get ready to leave. Then Wayne lit a cigarette.

Ferrell told Mills to put the cigarette out and Mills refused, ashing the cigarette on the top of the bar and saying that he helped “build this bar.” Then Chris Ferrell reached across the bar and grabbed the cigarette out of Wayne’s mouth, crushed it, and threw it on the floor. Then according to Ferrell’s testimony, Wayne Mills said, “If you ever take a cigarette from me again, I will kill you,” but with profanity.

Chris Ferrell then told Wayne Mills to leave. Mills did not leave immediately, but when he did make his way to the door, Ferrell testified that he said to Wayne who was holding a drink, “Wayne, you can’t take that fucking drink with you.”

Chris Ferrell testified that he was standing equally between the two guns—the .22 he used to shoot Wayne Mills, and the .45 revolver—-and that he didn’t consciously choose either. He also stated that he didn’t see Wayne, but was just shooting at the corner while in a state of shock.

Wayne then fell outside the door of the Pit and Barrel, and then Chris testified he went around the bar and then paused before opening the door outside because “I didn’t know if anyone was still there.” He still had the .22 in his hand. He then saw Wayne laying on the ground, and went over to “check” him, and noticed he was bleeding from his head. Before he dragged Wayne Mills back into the bar, he went into the bar to put down his .22 pistol. Ferrell claims he brought Mills back into the bar because, “I thought I could take better care of him there.”

Then according to Chris Ferrell’s testimony, he inspected Wayne’s torso looking for a weapon. He then looked near the door of the Pit and Barrel, and only found Wayne’s cell phone. “I panicked. I believed he had a weapon, and I couldn’t find one,” Ferrell said.

Defense attorney David Raybin then began asking questions of Chris Ferrell that revealed the mistakes Ferrell made after the shooting. Raybin asked Ferrell why he didn’t call 911 when he found Wayne’s phone. Ferrell answered he “never thought” of it. Raybin asked Ferrell why he picked up the .45 revolver, unloaded it, and put it on the table where Wayne Mills had been sitting at, and Ferrel responded, “I picked it up…because I had just shot someone that was unarmed.”

David Raybin asked what aid Ferrell was rendering to Wayne Mills while he was dealing with the .45 revolver. Ferrell responded, “I wasn’t.” Rabin asked that when Ferrell finally did call 911, if he was truthful with the operator. “No sir,” Ferrell responded. Ferrell had a big white dog who was running free right after the shooting, and he attempted to get the dog under control. Raybin asked, “Were you paying more attention to your dog than Wayne Mills?” After and extended pause, and showing emotion, Chris Ferrell answered, “Yes.”

David Raybin asked Chris Ferrell if he disputed any of the testimony from any of the police officers or crime scene investigators. Ferrell responded, “No.”

Also during Chris Ferrell’s testimony, it was revealed that he had been handcuffed in the front and placed in a squad car at some point before being driven to the Central Precinct station to be interviewed. “Did you lie to Mr. Peck [the lead detective] when you started the interview?” defense attorney David Raybin asked Chris Ferrell on the witness stand. “Yes,” Chris Ferrell responded.

During cross examination by the prosecution, it was pointed out that Chris Ferrell never told Detective Peck about the “cocaine, whores” quote that was characterized by the defense as the first time anger was evidenced by Wayne Mills. Assistant District Attorney Wesley King also pointed out through cross examination that Chris Ferrell had been trained medically as a first responder when he worked as a firefighter in Arizona, but didn’t call on any of those skills to help save Wayne Mills. It was also pointed out that during Ferrell’s testimony to Detective Peck, Chris said that he brought Wayne Mills back into the bar because “he” (meaning Chris Ferrell) was cold.

Wesley King also brought up the Spike TV Bar Rescue episode about the BoondoxXx bar that became the Pit and Barrel. Though the defense characterized Chris Ferrell as being tidy with his bar (and the reason he was against smoking), the Bar Rescue episode showed the bar before it was remodeled as a filthy establishment, with rat droppings on the floor, serving undercooked meat, and Chris Ferrell yelling profanity at employees. Ferrell’s response was, “It’s a TV Show.”

The court took a lunch recess during the Chris Ferrell testimony. Next the defense called private investigator Larry Flair, who walked the jury once again through the crime scene, but didn’t offer any new revelations in the case. Larry Flair was also the individual who found the extra bullet police investigators missed. Flair’s ability to testify on certain elements of the case had been challenged by the prosecution.

After some procedural arguments were heard about jury instructions, the court recessed for 10 minutes, and prepared for closing arguments.

UPDATE: Because of the weather and other concerns, the court and attorneys have decided to adjourn for the evening. Jamey Johnson was in attendance to hear the closing arguments. 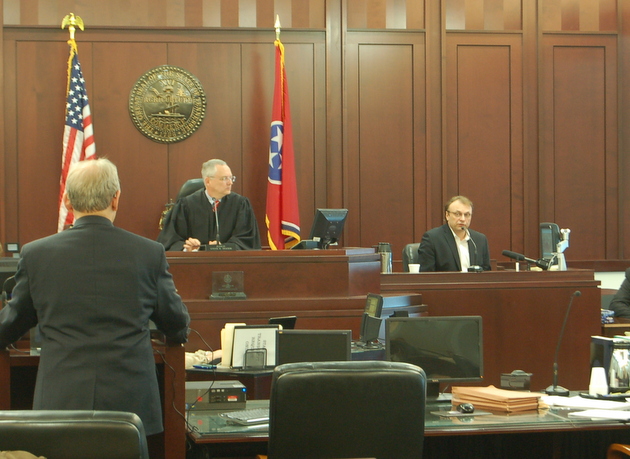