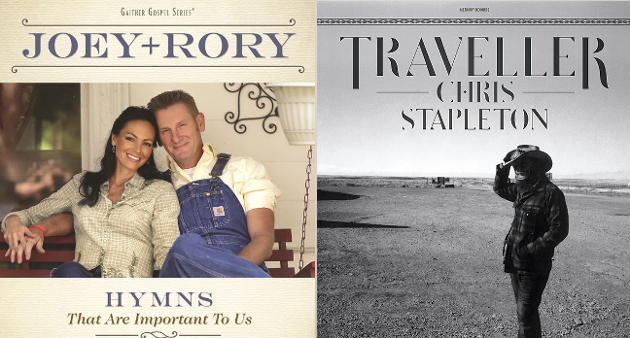 Chris Stapleton is absolutely blowing the doors off the competition when it comes to country album sales in 2016, and it’s not even close. His debut Traveller is lapping the competition, while the only album that can keep up is Joey + Rory’s gospel record Hymns which is in 2nd place.

Stapleton’s Traveller has sold a total of 731,000 copies so far in 2016, and that’s for an album that was released all the way back on May 5th, 2015. To put that in perspective, that is nearly 3x the amount of albums of Blake Shelton’s If I’m Honest, almost 4x the amount of albums of Keith Urban’s Ripcord, and over 5 ½x the copies of Cole Swindell’s You Should Be Here, all of which debuted in 2016, are heavily promoted through radio, and should hypothetically have a greater chance to ring up more sales this calendar year. Traveller has now sold 1.42 million copies total since its release. Joey + Rory has also bested all of this competition with 326,000 albums sold so far.

Here’s how the numbers break down according to HITS Daily Double for album sales in 2016 so far:

You may be saying that’s all fine and dandy, but as some love to point out, album sales aren’t as big of a deal anymore. It’s all about songs. Well even that holds a surprise in the top spot. Though Luke Bryan, Florida Georgia Line, Sam Hunt, and Thomas Rhett have all released mammoth singles in 2016, it’s Tim McGraw’s “Humble and Kind” that is the best-selling song so far in 2016 with 725,000 downloads, topping Thomas Rhett’s “Die a Happy Man” by 26,000. The Lori McKenna-penned “Humble and Kind” has also become the first solo-written song to top the country charts in four years.

The bros like Luke Bryan and Florida Georgia Line are still dominating in streaming numbers, but there continue to be signs all across country music that fans are looking for more substance, and finding it on albums that are not always represented by what the radio plays. And there is still no sign of Chris Stapleton’s Traveller slowing down. It was #1 once again last week, deposing Jon Pardi’s California Sunrise at the top of the charts.