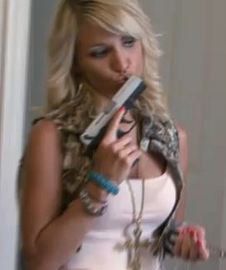 One of the most popular cast members, Taylor “Lil Bit” Wright, has quit the show due to safety concerns over what transpires in the Party Down South house, and because she feels like the message of the show is in conflict with her religious beliefs. “I appreciate all y’all’s support,” Taylor Wright said on Twitter. “Gods got a different plan for me though.”

Taylor Wright quitting the show does not have to do with money according to reports. The Party Down South cast held out on the show’s producers right before season 2 demanding more pay. But apparently Taylor Wright says she would not come back to the series even for a million dollars. Taylor quitting gives the show’s producers a big hole to fill in a series that depends on making reality show celebrities out of cast members with cohesive lineups and storylines.

The news comes roughly 24 hours after it was revealed that another cast member, Ryan “Daddy” Richards, was accused of rape by a woman who says she entered the Party Down South house, was handed an open beer, and woke up later naked in a bed with a camera in her face. The woman went to the hospital the next day, and according to medical professionals, showed signs of sexual assault. An investigation by local police that included interviewing cast and crew and reviewing footage, did not result in any charges being filed.

Taylor “Lil Bit” Wright certainly made her religious beliefs known through the show. Her Christian faith was established heavily as part of her character beginning with the first episode. She regularly was seen with her Bible, and talked about Jesus on the show despite her behavior often conflicting with traditional Christian beliefs.

Multiple Party Down South cast members have found themselves amidst controversy and legal trouble since the beginning of the show less than a year ago. Louisiana native Lyle Boudreaux was arrested in Maurice, LA for burglary of a vehicle at a Mardi Gras parade. Boudreaux found an unlocked car, rifled through a woman’s purse, and stole a credit card to fund the night’s drinking. Mattie Breaux of Louisiana was also served a bench warrant after she failed to appear in court as part of a pretrial hearing in March. The hearing was for a previous arrest for driving while intoxicated in September. Breaux was taping Season 2 of the reality show at the time of the hearing.

Party Down South has come under heavy scrutiny for its portrayal of Southerners in the show. Season 2 was initially scheduled to be taped in Pensacola, FL, but had to move to Athens when local residents and businesses did not want the show blemishing the city’s reputation. Ben “Cooter” Jones of The Dukes of Hazzard fame has also been a vocal opponent of the show.