David Allan Coe Back Performing After Bad Accident / Thanks Fans 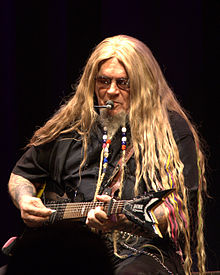 Outlaw country icon David Allan Coe went to war with a semi-truck, and lived to tell the tale. The 73-year-old performer suffered broken ribs, bruised kidneys, and head trauma on March 19th when his 2011 Suburban was broadsided by a semi at the intersection of Silver Springs Boulevard and Pine Ave. in Ocala, FL. The incident landed Coe in the Ocala Regional Medical Center for 4 days, but from the pictures of the wreck, the country singer was fortunate to be alive at all.

Now David Allan Coe is back performing, and on the 4th of July made the trek to Billy Bob’s Texas in Ft. Worth to participate in Willie Nelson’s 40th Annual 4th of July Picnic—an event that Coe has been a mainstay at for years. It was one of his first shows since the accident.

“They had come on the news and said that I’d died,” Coe explained to a packed Billy Bob’s. “A lot of people were calling my wife and saying that they’d heard that I’d died.”

When Coe told the crowd he’d been out of the hospital now for a month and a half, Billy Bob’s erupted in applause.

David’s wife, Kimberly Hastings Coe, said right after David left the hospital, ““David being David, said to me before leaving the hospital; ‘Well, now I have an opportunity to write another great song. A lot of fans tell me that my songs have given them strength to get through difficult times. This accident has given me another subject in my life to write about that will hopefully help others.’ ”

Coe’s new band lineup is a rather avant-garde approach for country, with two keyboards and lots of percussion. “I’m going to play you some old songs, and I’m going to play you some new songs,” Coe told the 4th of July crowd. “And I’m glad I can play you any songs at all.” At the end of the Picnic, Willie Nelson invited Coe, along with Jamey Johnson, Gary Allan, and other performers onto the stage to close the night out singing gospel songs.

Coe also penned a personal letter to all of his fans who supported him through the incident, made available through his wife. 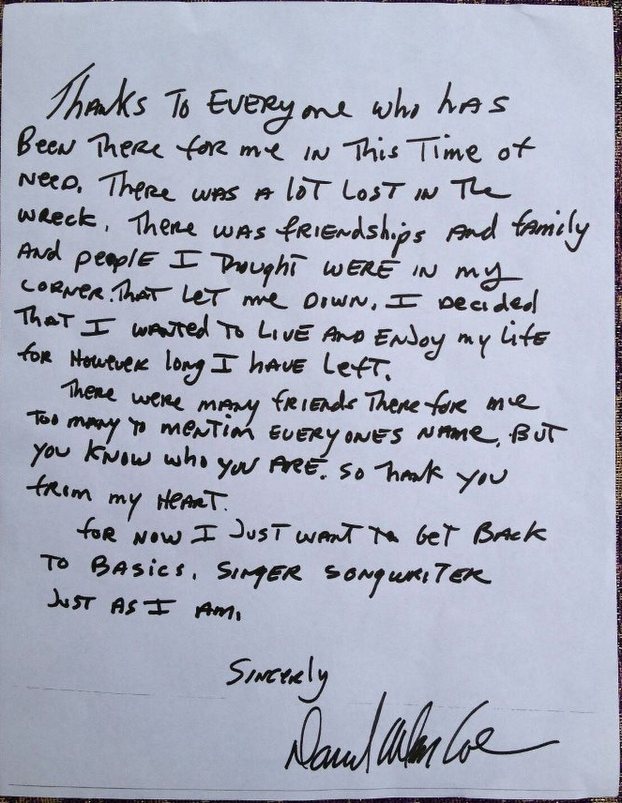 Here is the entire post, originally posted on his Baby Black Windows blog.

Today is my birthday. I’ve been breathing for 29 years, of which this last has brought monumental change, the type that brings about reevaluation of those preceding. There is, though, one thing I am asked about every single day: why am I no longer playing guitar for David Allan Coe?So this is what happened.

My father told me I was a member of his band when I was 15 years old. We were in the back of a stretch limo on the way back from his picking me up at the Orlando airport. I’d been visiting my mother in Tennessee, not having seen her in the year since I left home after finding brochures to military schools in our mail.

“You been practicing your guitar chords?”

“Good. I’m recording a live album in three days. You’re on it.”

Little family chats like that are how you lose a decade of your life.

I was now the “rhythm” guitar player for the David Allan Coe band. “Rhythm” because that’s the label that stuck despite the wild permutations of its reality. Initially I played a six-string acoustic, seated, cheat sheets of the chord progressions to every song taped to the floor beneath me. With a full band, my contributions to the show were insignificant, to be sure.

I was, however, determined to get good at my instrument. I eventually did, only to discover that it didn’t matter how well I performed any given night. If my father decided the show wasn’t going to go well then it wasn’t going to go well. Thanks to his practice of introducing me as his son at the end of nearly every show and then leaving while I stayed behind to help load out, I became the unofficial Complaints Dept…

YOU DIDN’T ENJOY THE DAVID ALLAN COE CONCERT
a Top Ten list of complaints received by Author, in person and otherwise, and Author’s response

So, okay, you deal with all of that for years because it’s your father and family is family. And I would have kept dealing with all of it. I would have fought uphill until my father said, “Enough.”

Now.I try to be nice and consider the feelings of others. It’s what has kept me so evasive on this subject until now. The dilemma is that I’ve been put in a situation where my personal reputation and the weight of my word is being called in to question. Some may say to let the truth be known eventually and that there is dignity in remaining silent in situations such as these. Problem is that I’m no martyr.

To be fair, I don’t like her. So I’ve told you that up front…

There is a photocopy of a letter being posted throughout cyberspace. A letter written in my father’s hand. The implication is that every person in his life, except his wife, abandoned him after his recent auto accident. Certainly, it doesn’t make sense to me that every person in someone’s life would take a hike because that person had a little accident. Must be something else going on there…

A Lesson in Subterfuge – The first thing you want to do is get in close with the target. Then you do everything you can to erode the stability of every standing relationship the target had previous to your arrival. First, lower employees, pawns. They’re easy. A small maneuver and they’re history. Then, you’re chipping away at the back row. Anyone who has decision making capabilities has to go. Anyone who controls money has to go. Friends who may take it upon themselves to offer advice to the target have to go. Family? This may prove difficult, as some family will no doubt see what you’re doing, but family absolutely must go. The target has to believe that you are the only person who has their interest at heart. Never relent and you will succeed in your task.

Back to that weird letter then…

Bruce and Linda Smith are good people. They did NOT steal anything from my father. Anyone who tells you otherwise is a liar or was lied to by a liar. Bruce Smith dedicated more of the time and energy of his life to my father than did any other living person, with no exception, including myself. That’s a fact. Bruce did quit his position as management for my father. In my opinion, he made a respectable decision to withdraw himself from a situation where his honor had been called in to question one too many times by a person whose own sense of honor seems non-existent.

The members of the David Allan Coe band did NOT quit their positions or abandon anyone. Steve Wood and Jake Stringer did not “abandon” their employer in a difficult time. They weren’t even contacted about continuing in their positions as touring band members. Let no person call into question their professional integrity.

I did NOT quit my job working for my father. The last contact I received from David Allan Coe was a text from him telling me that he was going to play some shows by himself, without a band, to get back into the swing of things and then we’d figure things out from there. That was in response to a text that I had sent him, telling him that I would do everything that I could to keep him touring with a good band. After he told me that he was going to do some solo shows, I contacted him with some information about a record label in Europe who is hoping to reissue some of his older material. I received no response about that and shortly thereafter found out that he was performing shows with an entirely new band. My feelings were deeply hurt when I learned that he was announcing onstage that his entire band had quit him and everyone had “abandoned” him when this was not the case. It became clear that my attempts to contact him were being deliberately ignored and I have no idea why.

So that’s what happened.

Make no mistake. This is not a tirade or reproach. I’m simply getting rid of the weight of keeping this shit a secret. I’m moving ahead. I’m going back to Nashville to be around the rest of my family. I have zero desire to be in another touring band at this time. I want to make the next SoC album. I want to spend time with my wonderful girlfriend. I want to put distance between myself and those who would piss on the legacy of my surname.

Today is my birthday. I’ve been breathing for 29 years.