Trigger Down with Pop Country 82 Comments 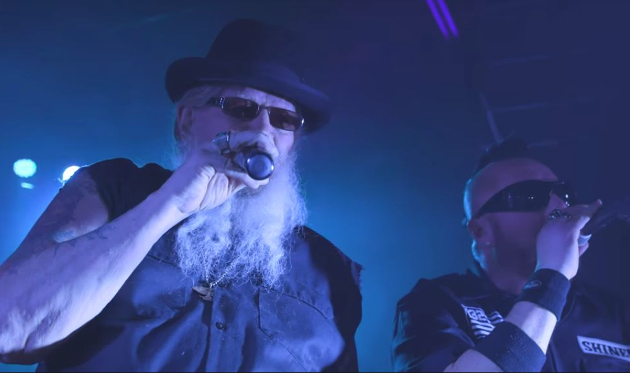 Look, I am an unapologetic David Allan Coe fan. I don’t care that his list of personal flaws is as long and flowing as the fake blonde locks adorning his otherwise prune shriveled head. Yes, David Allan Coe’s got problems. He doesn’t have a closet of skeletons, he’s got a living room full of them riding circles around him on those little Shriner motorcycles while he does rows of Jack shots off a residue and paraphernalia-cluttered coffee table. David Allan Coe is bat shit crazy and a certified country music wing nut if there every was one. But you can put his legacy of creative output up against 90% of the rest of country artists and it’ll kick their asses.

Nonetheless, I got no use for David Allan Coe with the country rap fucknards of the Moonshine Bandits prancing around him like a pink elephant they just won at the meth carnival for beating off a donkey, acting like Coe’s mere presence in any way legitimizes their imbecilic racket.

The only thing on God’s creation that is worse than country rap is 3rd tier country rap like the version The Moonshine Bandits peddle. When Kid Rock was sticking his tongue up Coe’s ass back in the 90’s, at least he was popular enough where it resulted in some otherwise culture-deprived hellions getting wise to real country music. The Moonshine Bandits ain’t no RUN DMC, and David Allan Coe ain’t no Aerosmith. If Coe had all his faculties about him circa 1974, he’d know The Moonshine Bandits got a big bag of nothing and would drive his Harley Davidson Panhead right up their asses and hard cuss anyone who tried to stop him.

The Moonshine Bandits and country rap is music for the refugees of the opioid epidemic. It is for 14-year-old boys who think they own the world because they finally got hair on their balls, and the people whose mental maturation never progressed beyond that age.

This version of “Take This Job and Shove It” is a dumpster fire. The Moonshine Bandits are too busy masturbating on themselves for hoodwinking Coe to be a part of it to offer anything new and constructive, and Coe can’t wait to get off camera so he can blow all his new royalty money at the casino. Oh, and how original is it to have everyone spending half their time flipping off the camera? What, you think you’re Johnny Cash? I’d tell them The Man in Black would’ve whipped their ass, but I don’t want to be accused of quoting Eric Church.

“Take This Job and Shove It” became an iconic country music anthem for a generation because it encapsulated the quiet desperation of the working man and the theater of the mind they would succumb to just to make it through another day to feed their families through lean times. Here, the Moonshine Bandits make it into an ode of the great American fuckups too lazy to work, and who blame all of their problems on others.

It was cool they took Coe back to the very prison he served time in when he was a convict to record the video for this, but to waste it on this collaboration is tantamount to sacrilege. Even The Moonshine Bandits know their music is garbage. These guys have been doing this stuff for 15 years now with their stupid ‘Shiner Nation’ marketing scheme. They’re like the Insane Clown Posse of country, getting rich quick off of the simple-mindedness of others. But it’s good work if you can get it I guess, and in a way it’s kind of wickedly genius. These guys know they’re clowns, and at least give them credit for embracing it.

And I don’t care if David Allan Coe says he invented rap and has been doing it for years or whatever. The Bellamy Brothers say the same thing. Coe also thinks that rap is still the new, hip thing when it’s 35 years old. I would say to watch the immortal visage of David Allan Coe get besmirched by The Moonshine Bandits is pretty unbearable, but the truth is nothing can sully Coe’s legacy at this point any more than he’s sullied it himeslf. And for some reason, that’s why we still love him.