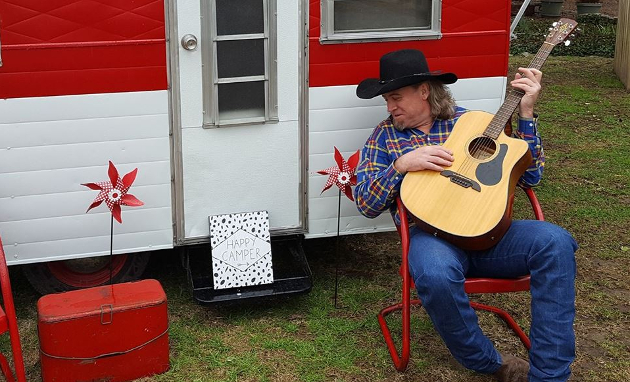 This was supposed to be 90’s country music star Doug Supernaw‘s second chapter in a troubled, but accomplished country music career. Instead, he’s now fighting for his life in a Houston area hospital due to a very serious Cancer diagnosis. If anyone’s story has played out like a sad country song, it’s been Doug Supernaw’s.

“After struggling with a prolonged cough, Doug was admitted to the hospital on January 25th, where it was determined he was suffering from Pneumonia,” a spokesperson explained on February 2nd. “Additional tests found fluid on his heart and lungs which put his heart in an A-Fib condition. Additional tests also found a suspicious mass in his right lung. It was then determined that it was in Doug’s best interest that he be transferred to another Houston area hospital.”

It was at that Houston area hospital that doctors confirmed that Doug Supernaw had numerous Cancerous masses in his lungs, lymph nodes, bones, and bladder, and he was diagnosed with Stage IV lung and bladder Cancer. He currently remains in the hospital as doctors decide a treatment plan.

Doug Supernaw was one of the hottest names in country music in the early 90’s, with strong traditional country hits such as “I Don’t Call Him Daddy,” “Reno,” and “Not Enough Hours in the Night.” Signed to BNA Records and with a big following in his native state of Texas, Supernaw had a bright future in country music, earning a Song of the Year nomination for “I Don’t Call Him Daddy” from the ACM Awards in 1996. But as sometimes will happen to country artists, Doug Supernaw began living out the stories of his songs, and he started to drop out of the fold, and hard.

By the late 90’s and into the 2000’s, Doug Supernaw had assembled a rap sheet that included arrests for public intoxication, driving while intoxicated, and things began to spiral down from there. By the late 2000’s, stories began to emerge about Supernaw’s mental state, including his theories about conspiracies against him.

2011 found Supernaw 12 years removed from releasing his last album, living in the Texas Hill Country town of Bandera, reportedly sleeping on top of a pool table in a local pub, and trying to trade discarded television sets for sandwiches. After numerous incidents in Bandera, Supernaw was arrested and put under evaluation. At this point fans of the singer had moved far beyond worries of when he may release new music, and were simply concerned for his well-being.

But in 2016 and at 55-years-old, Supernaw started to attempt to emerge from his troubled past, and restart his country music career after a 20 year absence. Supernaw was inducted into the CMA of Texas Hall Of Fame in 2016. He recorded a Greatest Hits album and released it on April 1st, 2017. The album was comprised of new studio recordings of some of his classics, as well as two new songs, “Here’s My Heart” and “The Company I Keep.” Supernaw was taking a one-step-at-a-time approach, and it was working. Supernaw also started playing more live shows.

“Doug fell on some hard times for some very specific reasons,” Doug Supernaw’s manager BJ Mezek told Saving Country Music in 2017. “Once he hit his all-time low, he realized that there was two sides to his life, and he chose to get back to the more positive side. Through that, he started making his way, cleaning up, and realizing that it’s not going to happen overnight. He started doing some gigs in Texas near home, and then a songwriter by the name of Jerry J. Thomas asked me, ‘Do you remember Doug Supernaw?’ I met with him, we sat and talked, he had a show in the Houston, TX area, and I can say with absolute assurity that he’s back. He wants to get back into it, and he’s pretty serious about it.”

“We would like to thank Doug’s amazing medical team for working so diligently in both the care, and treatment, of our beloved Doug,” a spokesman says. “We would also like thank both our friends, and amazing fan base for the so many heart-felt prayers during this difficult time. We appreciate that you will continue to respect Doug and Doug’s family’s privacy during these trying times. We will continue to provide updates as necessary.”

A Go Fund Me Page has been set up to help Doug Supernaw with his medical expenses.