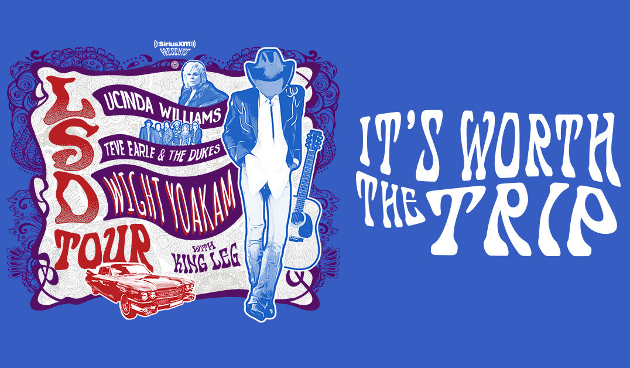 For those fans of classic Bakersfield-style country, excellent songwriting from alt-country Gods, unnatural illicit psychedelic substances and/or clever acronyms, Dwight Yoakam, Lucinda Williams, and Steve Earle have banded together in a slightly-unintuitive, but nonetheless seductive lineup, and branded it the “LSD Tour,” which is only slightly less confusing than if it was called the LDS tour.

The LSD Tour will be a unique opportunity to see these three legends of (alt) country together for the first time. Yoakam is currently promoting the launch of his own SiriusXM channel, which should be going live soon, Lucinda Williams is promoting the release of the 25th Anniversary edition of her landmark album Sweet Old World, and Steve Earle is celebrating the 30th anniversary of his magnum opus, Copperhead Road. The Dukes will be joining Earle on the tour, and King Leg will be the opener on all dates.

The tour will span 18 total dates, including marquee stops at Red Rocks in Colorado, the Beacon Theatre in New York, and the Ascend Ampitheatre in Nashville. And who knows, maybe more dates will be added if everyone has a groovy time, and the Kool-Aid doesn’t run out. It’s kind of weird, but just go with the flow man, and don’t put anything sharp in your mouth.

Have a safe trip.