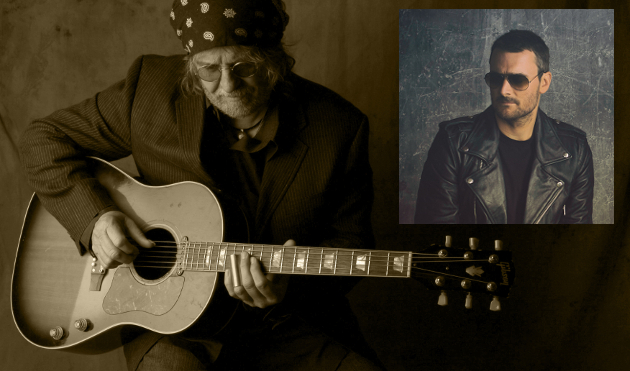 Deep country blues dead thumb picker Ray Wylie Hubbard, Lubbock’s own Buddy Holly, Houston native Mickey Newbury, who was a well-accomplished songwriter beyond being shouted out in the Waylon Jennings-performed “Luckenbach, TX,” and Liz Rose, who may be more synonymous for writing an impressive list of hits in Nashville and for being one of the town’s few surviving songwriters of substance, but is originally from Dallas, were all part of the 2018 inductee class.

Quite an impressive lot of musical dignitaries were also on hand for the event, including Radney Foster, Bob Schneider, Jamie Lin Wilson, Joe Ely, Jack Ingram, and they even got Ronnie Dunn of Brooks & Dunn to host the awards. There was a presentation for each of the recipients, and performances by the honorees, with others filling in for the deceased Buddy Holly and Mickey Neubury. But I’m not sure anyone expected a star of the caliber of Eric Church to arrive and honor his all-of-sudden close friend, Ray Wylie Hubbard, taking a decidedly regional presentation into a national story.

The friendship between Eric Church and Ray Wylie Hubbard was originally kindled when Church dropped Ray Wylie’s name in the title track of his most recent album, Mr. Misunderstood. At the time it just seemed like a passing thing. The two performers did not know each other. But then in February of 2017, Ray Wylie Hubbard was invited on stage with Church at the American Airlines Center to perform Hubbard’s anthem, “Screw You, We’re From Texas.”

On Saturday at the Texas Heritage Songwriters induction, Church joined Hubbard on stage again, performing the title track of Hubbard’s latest record, “Tell The Devil I’m Getting There As Fast As I Can.” Originally Lucinda Williams also sang with Eric Church on the studio track. Then emcee Ronnie Dunn joined Hubbard and Eric Church for a rendition of “Snake Farm.” Dunn has his own history with Hubbard. The two penned the song “Bad On Fords and Chevrolets” together in Austin in 2012, which was eventually recorded by Sammy Hagar.

The main focus of the night should of course should be on the four new inductees to the Texas Heritage Songwriters Association. But the stars turned out to make the evening much more than a gaggle of locals patting themselves on the back.

The mission of the Texas Heritage Songwriters’ Association, in the interest of Texas Cultural preservation, is to honor and celebrate Texas songwriters who have played an important role in defining and interpreting Texas’ distinctive culture.

Videos via KOKE-FM in Austin.