Garth Brooks Set For Nothing Short of World Domination

In late October when the 52-year-old Garth Brooks was getting set to announce he was officially coming out of retirement, Saving Country Music spoke in-depth about how the return of Garth could have a “colossal” impact on the genre. Well apparently, this prediction was a bit too measured.

Subsequently as Garth Brooks continues to square away his affairs and flesh out the specifics of his comeback, it is apparent that the country superstar is set for nothing short of world domination. “If I may say so, the whole goal in life is to make whatever you’ve done before look small,” is what Garth told “The Talk” earlier this month. Take into consideration, this is coming from the man who is the third highest-selling music artist in history behind Elvis and The Beatles in the United States. So how is Garth planning to trump his own apogee?

Forget about any new, original music or tours for a second, let’s first sit back and appreciate what Garth has done with his Blame It All On My Roots box set released on November 28th. When Garth announced the end of his retirement, many believed he didn’t have a chance in the new music paradigm. The industry had changed so much in the dozen years since he left, and some 20 years after he was arguably at his peak of relevancy. How could Garth be successful, especially if he wasn’t willing to kowtow to iTunes and the digital world? But for a release that is not on iTunes, not anywhere digitally, and can only be purchased at Wal-Mart, Blame It All On My Roots has been positively dominating the charts, outselling huge releases from major, top-tier pop acts like One Direction, Brittney Spears, Eminem, etc., sitting well-ensconced at the top of the country music albums chart, and #2 in all of music, selling nearly 700,000 copies so far and still going strong. 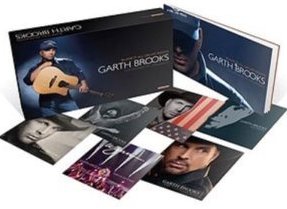 And this is all with virtually no radio play, and not a spec of original music. Blame it all on the box set being the perfect Christmas gift and an impulse buy for many, but Blame It All On My Roots proves that the appeal for Garth’s music remains massive, and doesn’t need radio play or iTunes to have a commercial impact.

But this is all still posturing. The box set is simply a bellweather at best, and its success will probably be dwarfed by Garth’s future actions in the coming months and years. New, original music from Garth is what the American public is really salivating for, and what will have the greatest impact.

As will a tour, and from what Garth is saying, his upcoming tour could be legendary, spanning the globe, and transpiring over a total of three years. And once again, Garth says he wants it to be “…bigger than anything we’ve done. That’s the goal.” Flying out over Texas Stadium suspended on wires?…eat your heart out.

Garth told Electric Barnyard, “Our job is to make sure that these people that came in the 90’s come back and go, ‘Gah dang it, I didn’t know it could get any better.’ …We’re on the blueprints right now. We’re going to build a stage and a lighting rig that will hopefully blow people away. And we’ve actually got a sound system that has never been used before that’s coming, a new technology. So everyone in the room can feel the thump. We’re going to bring it in, we’re going to be proud of it, and it’s going to be loud.”

But the tour will likely not transpire until the fall of 2014, so what will tide fans over? Brooks once again hints to grandiose plans, telling Nashville’s NewsChannel 5, “There is something that could be happening between now and the tour that might be the biggest thing I’ve ever tried to take on. I’m excited. If it comes to fruition, and it looks like it’s going to, it will be the biggest thing I’ve ever tried to attempt. I’m really excited about it. It’ll be done right, it’ll be done quality. I’m in love with the idea and we just have to see if it’s going to happen. We’ll know within the next four weeks or so.”

But what about new music? Garth has been locked in a rather public battle with iTunes and other digital music sellers, unwilling to release his catalog to them because of many grievances, principally that he doesn’t want to piecemeal out his albums by selling individual songs. iTunes is unwilling to give Garth special treatment, likely because this could set off a cavalcade of stars wanting iTunes to give their albums special pricing or to make their songs available only through albums. But what Garth proved with the Blame It All On My Roots box set is that he doesn’t need wide distribution for his music to be commercially successful. He can completely circumvent the entire distribution system of the music industry and still have a #1 release. At the same time, the lack of digital distribution may not allow Garth to achieve that “make whatever you’ve done before look small” goal.

What to do about new music might be the missing piece in Garth’s plans for country music domination. We know he wants to release new tunes, but how to have it live up to the same world-beating status he’s trying to achieve with his tour and the upcoming January surprise is the question.

Nonetheless, Garth has a release at the very top of the charts, a massive, worldwide tour in the works, and something special planned for in between. The accumulative effect of all of this is that Garth Brooks is very much back, and a dominant, undisputed feature in the country music landscape once again.