Welcome ladies and gentlemen to the George Jones Playin’ Possum – The Final No Show LIVE Blog. Since tonight’s festivities will not be televised, we’re going to try to do our best to make folks that could not be in attendance for this historic event feel a part of it by providing a place to listen along, share thoughts, and hopefully post pictures as they come in from attendees. Over 100 performers are scheduled to make an appearance. So get your refresh fingers ready and please feel free to chime in below in the comments section.

11/23 12:30 PM: Here’s some bootleg video from last night. Good, multi-camera quality for final Alan Jackson song, Martina McBride & George Strait right before the finale, and though there’s a few Gremlins in the audio, you can catch the vibe of the Jamey Johnson / Megadeth song. You can also see Big & Rich on their riding lawnmowers singing “Love Bug,” and Jamey Johnson singing “Tennessee Whiskey.”

11:32 – Thanks everyone for stopping by! Thanks to the George Jones Twitter Page, Country Weekly, and other random attendees for the pictures! Thanks to The Tennessean, and other folks on the scene for filling us in on all the songs and performers and other information. Make sure you also check out the Tennessean’s Live Blog for more coverage, and their photo gallery of the event (apparently, Big & Rich did their song on riding lawnmowers).

11:30 – From The Tennessean about the end of the concert:

A tribute concert to George Jones would not be complete without “He Stopped Loving Her Today.” Alan Jackson does the honors.

Then he invites Nancy Jones on stage and invites the audience to sing along.

Leaving the stage, his arm around Nancy Jones’ waist, he stops to set the rocking chair on stage in motion. As the chair meant for Jones rocks slowly back and forth, the crowd claps and cheers begging for more.

But it is, indeed, the end.

The audience has made it clear that, like his chair, it truly rocked.

11:26 – Apparently the whole arena was singing along to “He Stopped Loving Her Today,” led by Alan Jackson.

11:18 – And of course, as it should be, Alan Jackson comes out to close the show out by performing “He Stopped Loving Her Today.” 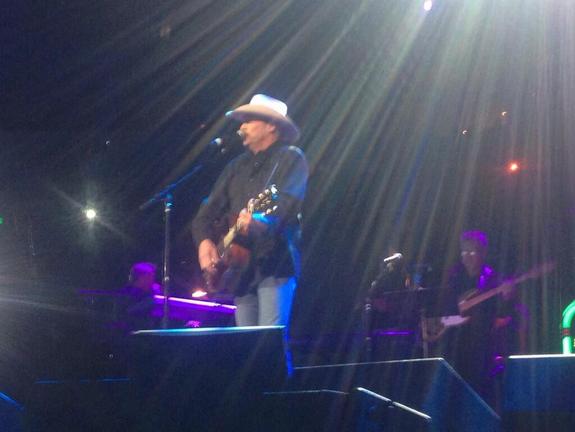 11:15 – Apparently Reba lost her voice, and was unable to perform. As you can see from the lineup picture below, she was sceduled to play before George Strait. Here’s Reba’s post from Instagram.

11:12 – So about the joke Bill Anderson told earlier, and the performance afterwards, here’s the account from The Tennessean:

Tied up on Old Hickory Lake boats owned by Anderson, Jones, record producer Billy Sherrill and others. Jones’ was the only one that had a small dinghy boat tied to the back.

One day, Anderson said, he was trying to dock his boat and the wind blew his boat into Jones’.

From that day on he was known as “the man who put the dent in George Jones’ dinghy,” Anderson said with a laugh.

After groans and chuckles, Anderson is joined on stage for another historical group number with Bobby Bare, Jim Ed Brown, Jimmy C. Newman, John Conlee, Larry Gatlin, Ray Stevens, and Stonewall Jackson. Pioneers who paved the way for so many, the group sings “When the Last Curtain Falls,” and “Still Doin’ Time.”

The boys still clearly have a few good jokes in them. “I fell down but I’m good,” Jackson said from his seat on the stage, before their final number “Some Day My Day Will Come.” 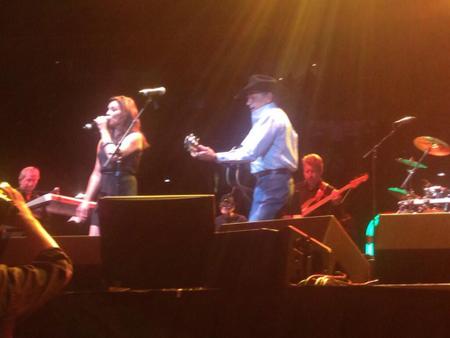 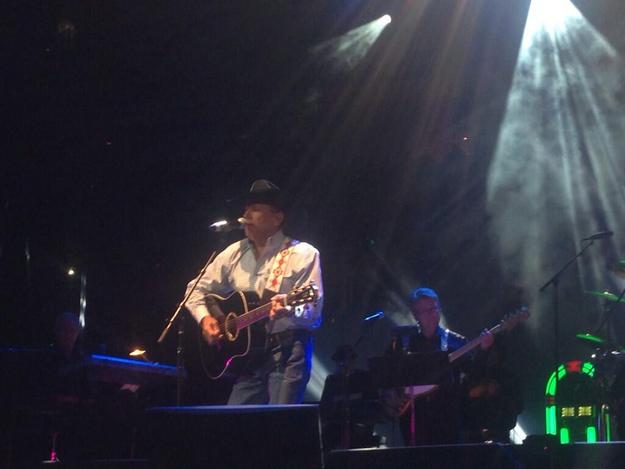 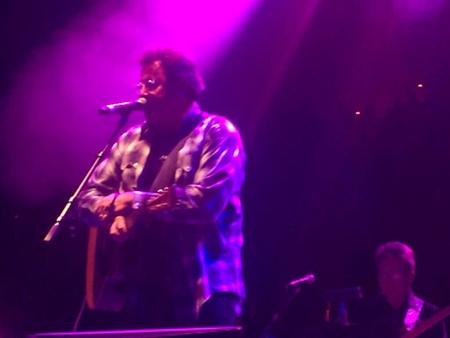 10:52  – Patty Loveless takes the stage to sing “Blue Must Be The Color of the Blues.” No picture of Jessi and Shooter yet, I’m not being bias 😉 . The biggest names of the tribute are coming up! 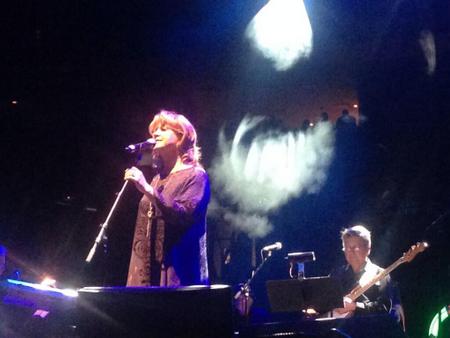 10:45 – We’ll try to get the names of the others who joined Thompson Square. Meanwhile Shooter Jennings has taken the stage. 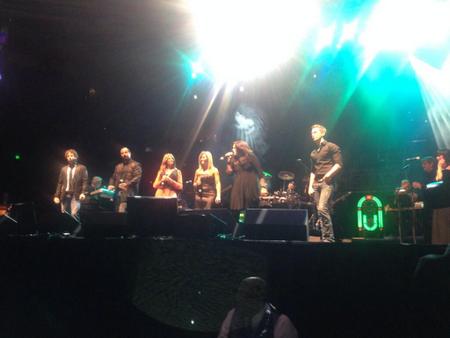 10:37 – Another interesting quote from Dave Mustaine of Megadeth: “Heavy metal is all about rebellion and George was definitely a rebel. Thank you for welcoming us into this beautiful family.”

10:33 – Stacy McCloud who is the entertainment reporter for Nashville’s Fox 17 is the new emcee. According to the Tennessean, she was the last reporter to interview Jones. “I will never forget he walked out and said, ‘Hey there, young lady. I think I’ve been dreaming about you.’”

10:30 –Rodney Atkins played “I’ll Be Over You When The Grass Grows Over Me.” SEE PICTURE  Now on stage is Lorrie Morgan singing “Picture of Me With You” SEE PICTURE.

10:22 – “Country music transcends barriers, it has come into my world and so many other worlds.” – Dave Mustaine 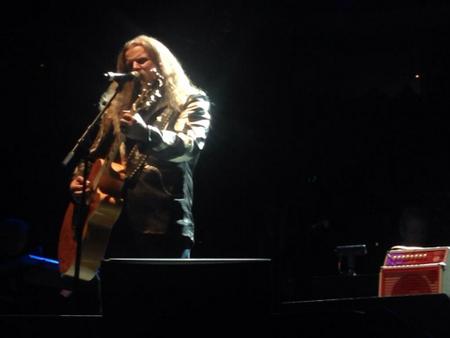 10:14 – By the way, the Jamey Johnson / Megadeth collaboration was on “Wild Irish Rose.”

10:09 – Cool picture of Charlie Daniels warming up backstage during Act 1. 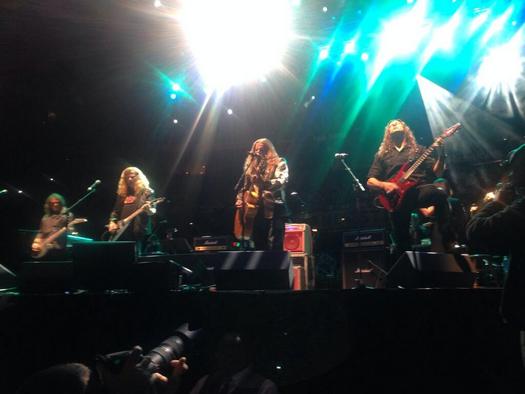 10:01 – Cool Picture of Blake Shelton and Miranda Lambert from earlier. Working on getting a Megadeth / Johnson photo. 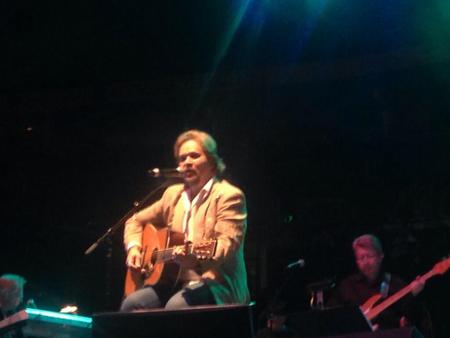 9:48 – According to George’s wife Nancy, he knew he would not make this tribute that was originally scheduled to be the final show of his final tour. “I said, ‘Why are you agreeing to everything?’ ” Nancy Jones remembers. “He said, ‘’Cause I’m not going to be here. I’m going to agree to anything they ask. Promise me you’ll make a tribute show out of it, and I’ll see it from heaven.’ ”

9:44 – The emcee for Act 2 has changed from Ralph Emery to Keith Bilbrey, the weatherman on the Ralph Emery show for 21 years.

9:39 – As you can see from the list below, we missed bluegrass group Dailey & Vincent playing with Baillie & The Boys. But unlike the list, we remembered the additional  ‘I’ in Baillie. Megadeth with Jamey Johnson should be quite entertaining.

9:35 – From The Tennessean: “Wow what a show,” Ralph Emery says. “Back stage we’ve got a movie star and we’ve got a former governor, and we have all kinds of entertainment here as we salute George Jones.”

9:28 – Well look what I found. Apparently Act 2 is about to commence. From Little Rebellion’s Music Photos on Facebook. 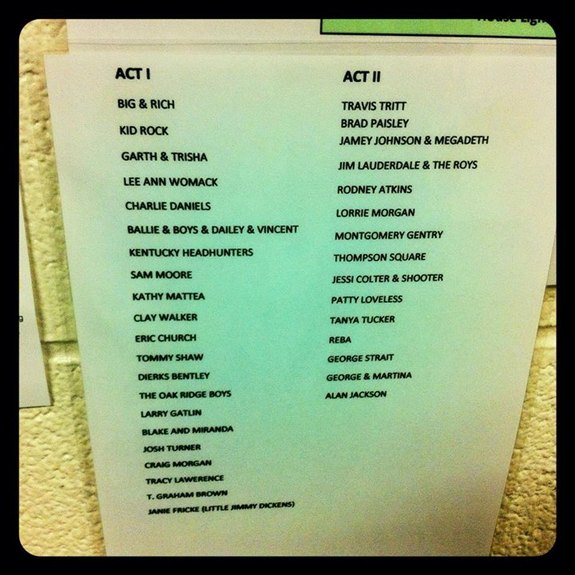 9:21 – Apparently there is a short intermission going on right now, and more music is coming up in mere moments. Here is Little Jimmy Dickens sitting in the George Jones rocking chair from Country Weekly’s Twitter feed. 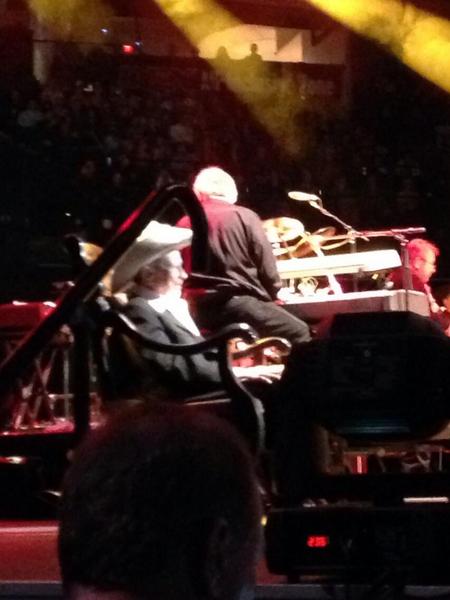 9:17 – It’s not much to look at, but you can hear the tribute in the background, and see the scene on lower broadway from the Tootsies Orchid Lounge Live webcam.

9:14 – Apparently Little Jimmy Dickens has made an appearance on stage to sit in the empty George Jones rocker. He’s about the only one who could pull off such shenanigans.

9:10 – Also part of the Tracy Lawrence, Suzy Bogguss, Colin Ray, T Graham Brown, and TG Sheppard group from earlier was Jett Williams. THey performed the songs “The Love in Your Eyes” and “Wine Colored Roses.” 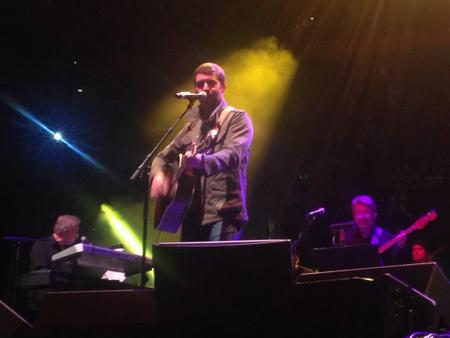 8:59 – Power couple Miranda Lambert and Blake Shelton now on stage singing “These Days I Barely Get By.”

8:55 – People watching the tribute show outside of the Bridgestone Arena. It is also being broadcast at Tootsie’s Orchid Lounge down the street. 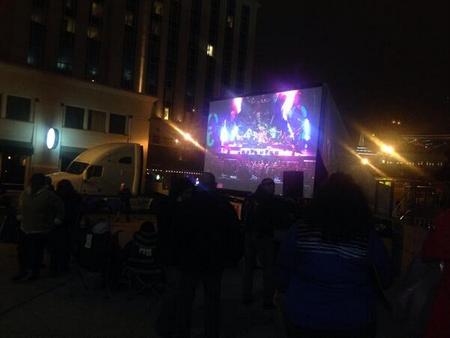 8:54 – Our second group of the night is now on the stage, made up of Tracy Lawrence, Suzy Bogguss, Colin Ray, T Graham Brown, and TG Sheppard.

8:52 – There are also emcees as part of the event that are working in shifts. The first was Larry Black. Right now it is Ralph Emery.

8:41 – Dierks Bentley singing “Always Get Lucky With You.” Now the Oak Ridge Boys are on stage singing “Same Ole Me.” 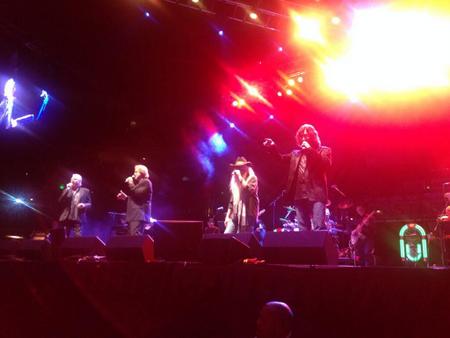 8:38 – There is a lot of buzz about Eric Church’s cover of “Choices” as well. Dierks Bentley on stage now.

8:37 – More on the Sam Moore rendition of “The Blues Man” from The Tennessean: “The crowd clearly connected with this performance, throwing up cheers mid-performance. It is easily the most emotion-filled of the night so far.”

8:35 – Well we know there will be video for this for the future, because they are broadcasting the event outside of the Bridgestone Arena on big screens, and Tootsie’s Orchid Lounge right done the street is also broadcasting it.

8:32 – Tommy Shaw of Styx is now on stage performing “She Thinks I Still Care.” 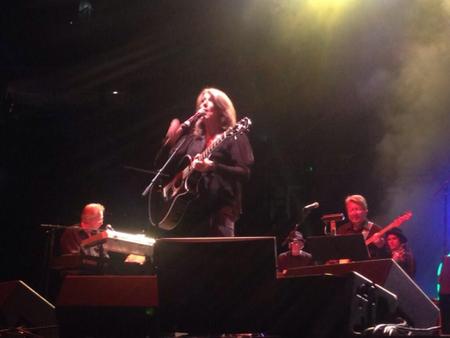 8:25 – Kathy Mattea played “I’m A Long Gone Daddy.” Up on stage right now is Clay Walker playing “Things Have Gone To Pieces.” For those of you counting, that is the 13th performance tonight in under and hour!

8:18 – Sam Moore is on stage right now singing “Blues Man,” and from the web chatter from the stadium, it is a stirring, heartfelt performance, one of the best of the night so far. SEE PICTURE 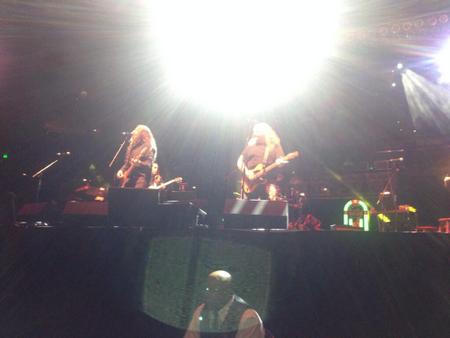 8:10 – For those of you wondering who all was in the “Ladies of Country Music,” it was Leona Williams,  Emmylou Harris, Jan Howard, Jeanne Pruett, Janie Fricke, and Jeannie Seely. They sang “I Am What I Am,” “Tender Years,” and “I’m Not Ready Yet.”

8:07 – With 112 performers and how quickly they are going to have to run through them, I hope there is time to make each performance count. It’s great to see so many legendary faces, but nothing beats that one special moment music can bring to a tribute. And someone better be recording. 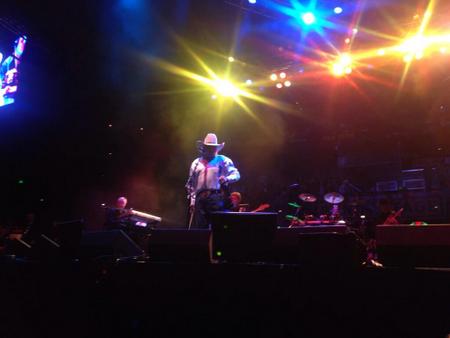 8:02 – Lee Ann Womack just played “Once You Had The Best,” and Charlie Daniels is now on stage!

7:54 – On stage moments ago “The Ladies of Country Music” with Emmylou Harris singing. 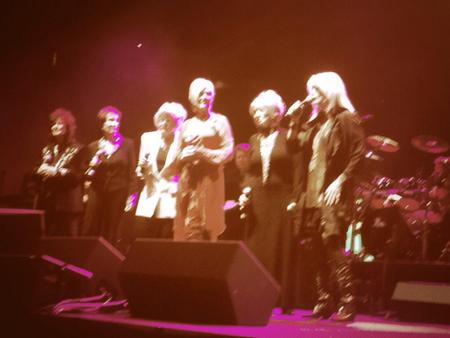 7:48 – So it’s not looking good for even an audio feed of tonight’s event folks! We’ll do our best to try and make you feel a part of it nonetheless!

7:46 – Big & Rich were the opening act for the tribute, and now Kid Rock is singing “White Lightning.” 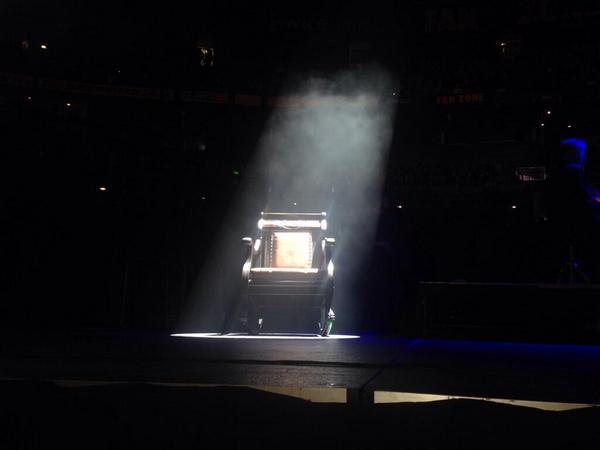 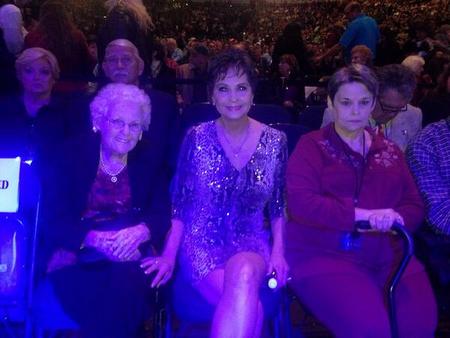 7:38 – Word is Megadeth. Yes, Megadeth is on site and will be performing tonight.

7:32 – Folks, on the WSM website, it says they are broadcasting the NO Show tribute, but right now I’m listening to the Friday night Opry. We’ll keep monitoring and see if we can at least find an audio feed.

7:30 – They have George Jones’ rocking chair set up on stage so he can be there in spirit for this historic concert. SEE PICTURE

7:29 – Here is what the inside of Bridgestone Arena looks like for the tribute. SEE PICTURE

7:28 – Folks filing into the Bridgestone Arena. Photo by Colby Peel on Twitter. 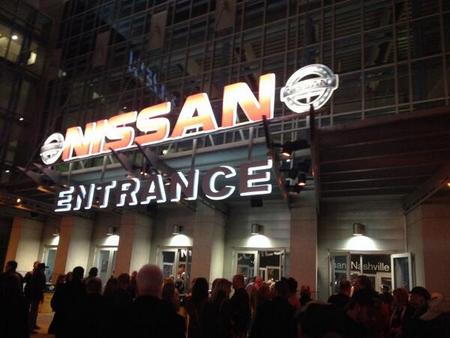 7:24 – The fact that tonight’s show is not being televised has been a source of much talk. It is not out of the question that it will be televised in the future, and certainly camera will be there. George’s widow Nancy Jones has said she wishes that every George Jones fan could participate. The event was sold out months ago, and was originally supposed to be a part of George’s final tour. They have set up screens outside of the Bridgestone Arena so fans can watch along. They also made an additional 500 tickets available at the box office last minute. 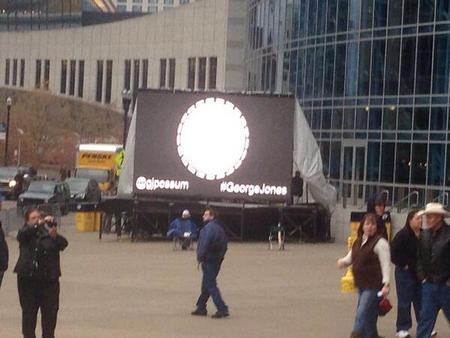 7:20  – The list of performers has swelled to 112 at last count, including some “surprises”. Here is the latest list we can tally: