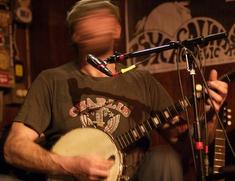 We did this a while back for bands in country music, taking Music Row’s rigorous requirements and running bands through them to illustrate that there are many accessible acts out there that could improve the genre right now if only given a chance. Though Americana may be a less-institutionalized and much smaller genre that tends to have better music and promote artists that are easier to respect, sometimes it can seem almost as exclusive as Music Row, as was seen in the latest list of AMA Award nominees. So here is a list of artists that even considering Americana’s heavy requirements, could make it big and improve the Americana world if only given a chance.

The only reason Possessed by Paul James isn’t big in Americana right now is because of exposure. If his music, recorded, but especially live, could be put in front of the right people, he would positively explode in the Americana world. He has all the right Americana tools: excellent songwriting, skilled musicianship, a message, and he exists in a no-man’s land; not really country or folk or blues or punk, but a true amalgam of them all, a wholly unique performer with a style all his own. He doesn’t just simply channel the emotions and energy from music and evoke them on stage, he becomes a manifestation of that energy, a creative quasar exploding right before your very eyes with beams of positive energy, inspiration, and emotion shooting into you as they bound off the walls and ceiling until they have penetrated you from every angle and you are a changed person. If you listen to the stories of people whose whole worlds have changed at a Possessed by Paul James show or if you are one of those people yourself, it is hard to look at a list of Americana talent and say it is anything but incomplete without him on it.

Austin Lucas is custom tailored to fit into Americana, because like most Americana artists, he doesn’t fit any where else, though his talents are undeniable and are worthy of a much higher level of support and attention. He’s too much punk and rock to be considered true country, but he too country to be considered folk. First and foremost he is a songwriter and a performer and an excellent singer who has some tremendous skins on the wall considering he’s unknown to many, including cutting records with Chuck Ragan, and touring on the Country Throwdown tour and sharing the stage with the likes of Jamey Johnson and Willie Nelson. Though it’s hard to see where Austin Lucas’s home is, it’s easy to say with that level of talent, once he finds it, he could explode. If Americana was smart, they would snatch him up before someone else does.

Out of all the artists on this list, Caitlin may be the most well-connected to break into the Americana inner-circle some day. Adored around her hometown of Nashville, and from a songwriting pedigree from her mother Liz Rose (the brainworks behind Taylor Swift’s early songwriting success), Caitlin sits in the awkward, not-exactly country, but not really indie-rock, rootsy world where Americana is supposed to rise up and fill the void. She brings the hip, indie-rock-esque new school approach to old country and roots music; the exact shot of youth, energy, and relevancy the graying Americana world needs without straying away from its principles. In her mid-20’s, time is still on Caitlin Rose’s side and her upside seems tremendous.

Whitmore may be the artist in a position of least need of the Americana stamp of approval seeing how he’s signed on the well-respected ANTI label with artists such as Tom Waits and Gillian Welch, but he may be the best example of how Americana, not just the artist, could improve their lot by being more inclusive. A one man show just like Possessed by Paul James, with punk cred just like Austin Lucas, he’s the songwriter without a real home who incorporates blues, folk, and some country with tinges of a punk attitude that can appeal to a wide swath of the enlightened music-listening population. It is pretty amazing where you can put William Elliott Whitmore and he works, and how many people are into him despite their diverse music sensibilities.

Some other good candidates would be the emerging Shovels & Rope, Rachel Brooke (though some could argue she’s more country/neo-traditional), and though they’re older performers, it would be great to see Charlie Parr and Otis Gibbs get some Americana love. Willy Tea Taylor would be another great candidate, though I think he looks at music more as a gift than an occupation.

Who are some artists you would like to see more incorporated in Americana?