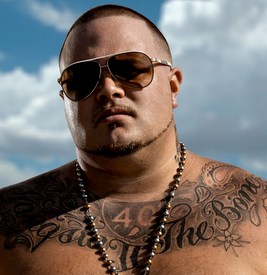 The rapping grandson of Waylon Jennings, one Will “Young Struggle” Harness, or “Struggle” as he prefers to go by now has a new album out called I Am Struggle, that doesn’t just borrow heavily from Waylon’s catalog, it is downright built from it. 7 of the 9 tracks on the country rap record directly incorporate samples and structures of Waylon tunes in an unprecedented intrusion of rap into the country music format and its catalog of legendary recordings from one of its most legendary artists.

What is the legacy of the sons and grandsons of country music royalty? It is of them getting a break in the music business because of their name, but then immediately rebelling against what the music world wanted them to be, which were living facsimile’s of their predecessors. Hank Williams Jr., Hank Williams III, Shooter Jennings, Justin Townes Earle, and on and on, and stretching to the daughters of country music like Carlene Carter and Rosanne Cash; they sweated blood and made deep sacrifices to divest themselves from familial expectations and industry shortcuts bestowed by their names to stand on their own two feet as artists.

With Struggle and this album, the approach seems to be the exact opposite, despite whatever words of explanation may accompany the project. It is taking from the Jennings family legacy and riding it as far as it will take him—so much so that it is hard to tell where Waylon’s music stops, and Struggle’s music begins. With the prohibitive costs of permissions in music these days, I Am Struggle would be impossible for anyone to make that didn’t have a direct line to the Waylon estate. Waylon’s primary estate executors Jessi Colter and Shooter Jennings actively participate in I Am Struggle, with both making appearances on the album. I Am Struggle is nepotism on steroids.

The use of Waylon’s songs in I Am Struggle brings up all sorts of ethical questions. Is it right to do this with a dead man’s songs? Does anyone have the right, beyond the legal aspects, to deem this practice appropriate with any deceased artist? What would Waylon think about country rap, and what would he think about his songs being turned into it? Would Waylon approve of Struggle’s style, and the free flow of iniquitous themes and vulgarity that accompany his music (and now Waylon’s by proxy)?

And that takes us to the actual content of I Am Struggle. Taking Waylon songs and incorporating them with dance beats or even adding rap verses to them is one thing. Taking a classic Waylon song like “Are You Ready For The Country” (originally written by Neil Young) and adding lines like, “Show me what is was and I’ll a show you what it will be. I got my hand on my nuts, can you feel me?” is something else entirely. Struggle’s lyrics commonly touch on criminal activity; a world he knows of first hand, having been indicted on federal drug trafficking charges and served time.

The precursor to I Am Struggle was a country rap single built from Waylon’s song “Outlaw Shit,” a slower, newer version of his classic “Don’t You Think This Outlaw Bit’s Done Got Out Of Hand?” The irony is that in the original Waylon song, Jennings espouses his disdain for the marketing of his music and persona as “outlaw,” and blames it for his own legal troubles. Struggle on the other had embraces this persona, with the words “Gangsta II The Bone” tattooed across his breastplate, and infusing his songs (or Waylon’s) with bellicose, urban gangster jargon and threats. The day Struggle’s “Outlaw Shit” was released as a single, he was incarcerated in a Davidson County jail. Many believe this was a marketing ploy to promote the song.

One thing we can assume is that Struggle has nothing less but undying respect for Waylon and his music. Struggle was not just some distant relative to Waylon that barely knew him who is now riding his name. Growing up, Struggle would spend summers on Waylon’s road crew, and his mother worked for a while as one of Waylon’s backup singers as she pursued her own career in music. However, Struggle has no blood relation to Waylon. His mother is the daughter from Jessi Colter’s first marriage to rock & roll guitarist Duane Eddy. Waylon only became Struggles named grandfather after the Jessi Colter / Duane Eddy divorce.

Something else worth pointing out about Struggle is that he is no Blake Shelton or Jason Aldean, and his songs are no “Dirt Road Anthem.” As I’ve also said about fellow Southern white rapper Yelawolf, Struggle has talent. He has a lot of talent. As offensive as I Am Struggle may be to the legacy of Waylon and to Waylon Jennings fans, some of the songs on the album are quite catchy, and some of the lines are infused with tremendous wit. The problem is with the way they are presented.

Hank didn’t do it this way, and neither did Waylon. Nor did Shooter, Hank Jr., or Hank3. How did we get to this point in country music when taking the life’s work of a country music legend and regurgitating it into vulgarity-laden country rap did not result in downright outspread public outrage? With the Lost Notebooks of Hank Williams project, there was protest, and a fundamental feeling that those songs were not anyone’s to do with what they pleased; a feeling shared by the executors of the Williams estate.

When Taylor Swift won her first CMA for Entertainer of the Year there was outrage because of the sense that country music was living too much in the present moment. I Am Struggle‘s use of Waylon songs is almost an audio version re-writing the past.

One song is one thing. But Struggle has too much talent, and the songs of Waylon are too important, and the subject of country rap too polarizing to make an entire album without the originator of the material being present to voice his pleasure or dissent. I Am Struggle leads country music down a very slippery slope where the catalogs of other country music greats could be opened and re-interpreted by country rappers or for other commercial purposes, forever soiling or superseding the original versions, and eroding their legacy.