For years a feud between Hank Williams Jr. and his half-sister Jett kept the legacy recordings of Hank Williams vaulted from the public ear, but a truce in recent years has unlocked a treasure trove of legendary content, stewarded to the public by Time Life in a slow but steady trickle. The Lost Concerts constitutes the last of the legacy Hank recordings, at least for now, and represent either the bottom of the barrel, or finally getting to the good stuff, depending on your perspective.

The listener must go into this collection of recordings understanding there will be quality issues, and just what an exceptional thing it was to get a live bootleg of a concert from the early 50’s. The Lost Concerts material comes from a concert in Niagara Falls, NY on May 4th, 1952, and another in Sunset Park, Pennsylvania on July 13th, 1952. The collection ends with an interview with Mack Sanders at KFBI in Wichita, Kansas from September 14, 1951. 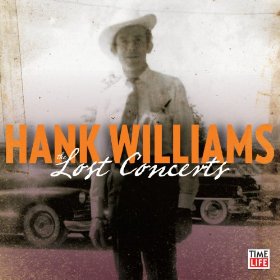 The Lost Concerts includes live versions of some of Hank Williams’ biggest hits, including “Hey, Good Lookin'”, “Cold, Cold Heart” and “Lovesick Blues”, and the only known recording of “Are You Walkin’ and A-Talkin’ For The Lord”. But the most rewarding thing Hank Williams fans will walk away with from this collection is a more intimate understanding of the man through the introductions and stage banter that is captured with such breadth in these recordings. Never before has Hank been brought to life in such a real, cognitive way, making this project a provocative, essential listen for the serious Hank Williams fan.

The album starts off with an extended 7-minute take of Hank Williams talking, cracking jokes as he introduces his “Drifting Cowboy” band. Between each song is even more spoken word gold, as Hank recites little stories and anecdotes about many of the songs. The ending interview gives an excellent glimpse into Hank’s personality as well. Another asset of The Lost Recordings is how intimately it showcases Hank’s legendary band, with fiddle player Jerry Rivers specifically showcased on renditions of “Orange Blossom Special” and “Fire on the Mountain”.

For people hoping for crisp recordings, you will be disappointed by this release. At times the quality issues could be labeled as “serious”, but one man’s flaws are another man’s ambiance, and you really get the feel while listening to the recordings of training your ear to a patchy radio broadcast during the mid-century. You might even find yourself wanting to adjust a dial before realizing it’s a CD or digital track you’re listening to.

The quality issues will probably keep the more common tracks on this album relegated to being cool, secondary takes you can go back and listen to. The gems are “Are You Walkin’ and A-Talkin’ For The Lord”, and my favorite, the rendition of the Luke The Drifter poem, “The Funeral”, capturing not only Hank’s masterful command of the English language in the colloquial setting, but his ability to deliver not just music, but words with such command.

For a man known as a musician, his skills at oration are astounding. His comedic timing is perfect. Hank Williams commands a crowd. He’s a charmer, and this characteristic is revealed with brilliant detail in the Lost Concerts. And to have new live versions of the songs that have become such standards of American music that they are engrained in the very fabric of our culture is not bad either.