Jamey Johnson in Contract Dispute– “I Don’t Get Paid.” 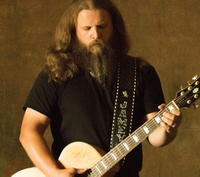 Jamey Johnson’s latest album, Living for a Song: Tribute to Hank Cochran was nominated for “Best Country Album” at the 55th annual Grammy Awards, but the long-bearded country singer was nowhere to be found at the ceremony on Sunday night. Instead he’s on tour in the Midwest, playing a show in Chicago the night before the awards where he caught up with Rolling Stone reporter Dan Hyman and had some revealing things to say about the future of his music and a brewing contract dispute.

“Financially speaking, they treat me worse than they ever did the Dixie Chicks,” Johnson explained to Rolling Stone. “I feel pretty used by the music industry, in that my contracts are written in such a way that I don’t get paid.”

Johnson is signed with Mercury Records Nashville. The label picked up his album That Lonesome Song in 2008 and signed him to a multi-record deal.

“It’s time for us to regroup and it’s time for us to look at these contracts,” Jamey says. “The problem is, I don’t trust any of the people that I’ve worked with so far. I believe they’ve all hidden the truth from me or lied to me or deceived me in one way or another. Because the end result is that no matter what they said or did or what they said they did, I didn’t get paid… As a musician I never studied music law. I can’t even read the contracts I’ve signed. But I’m fairly sure they don’t say what I thought they said.”

When it was announced that Johnson would be releasing a tribute album of cover songs, some wondered if an artist who is primarily known as a songwriter was in the midst of writer’s block. As Jamey explains, his contract issues have hindered his creative process, and fans shouldn’t expect any new, original material from him anytime soon.

This is not Jamey Johnson’s first issue with a record label. Signed to BNA in 2006, Johnson released his first single “The Dollar” to moderate commercial success. But when the second single, “Rebelicious” failed to chart, he was dropped by BNA.