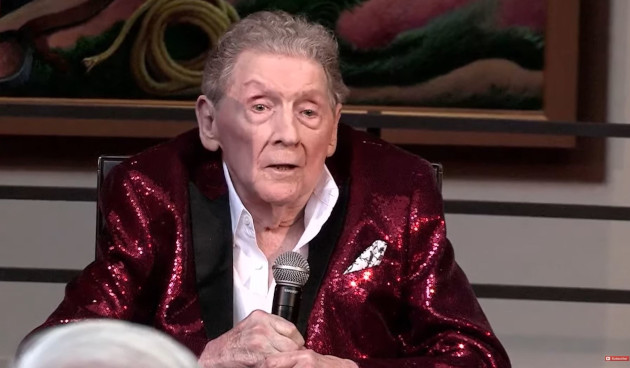 Great balls of fire, finally! Piano playing madman and American music legend Jerry Lee Lewis is the newest inductee into the Country Music Hall of Fame in the Veteran’s Era category. The announcement came Tuesday morning (5-17) at a press conference in the Hall of Fame rotunda in Nashville, and after years of lobbying by fans who wanted to see the American music legend honored while he is still with us.

“It’s always great to be recognized,” said Jerry Lee Lewis in his brief remarks. “I’m here, I love you, I couldn’t have done it without you.”

One of the biggest names ever in rock & roll, and with a distinguished career in the country music realm as well, the 86-year-old Jerry Lee Lewis joins his fellow Million Dollar Quartet members Johnny Cash and Elvis Presley as members of the Country Music Hall of Fame. Born in Louisiana in 1935 and rising to fame as a Sun Studios recording artist, Jerry Lee Lewis is arguably the most well-recognized rock & roll piano player of all time.

After becoming frustrated at his inability to land a hit in rock and roll after his heyday, Lewis decided to become a country music artist in 1968. He released his first country single, “Another Place, Another Time” by Jerry Chestnut in March of 1968, and would later release many albums of country material. Jerry Lee eventually had 17 Top 10 hit singles on the Billboard country chart, and four #1’s as a country artist.

Some of Jerry Lee’s hits included “What’s Made Milwaukee Famous (Has Made A Loser Out of Me),” “She Still Comes Around (To Love What’s Left Of Me),” “Since I Met You Baby,” “To Make Love Sweeter For You,” and “Sometimes A Memory Ain’t Enough.” Eventually Jerry Lee Lewis became one of the highest paid performers in all of country, and some of his previous rock & roll records were repackaged for the country audience.

Jerry Lee’s country music career wasn’t without controversy. Beyond the scandal the piano player was already carrying around after marrying his 13-year-old 2nd cousin, he made a mockery of the Grand Ole Opry stage during his first appearance on January 20, 1973. After being warned by Opry management to respect the family atmosphere of the show, Jerry Lee took the stage and shouted, “Let me tell ya something about Jerry Lee Lewis, ladies and gentlemen: I am a rock and rollin’, country-and-western, rhythm and blues-singin’ motherfu_ker!” Lewis also played for 40 minutes instead of his appointed eight-minute slot. He was banned from the Grand Ole Opry afterwards.

But his impact and influence on country music was undeniable. This is why the CMA Committee chose to induct Jerry Lee in a crowded Veteran’s Era field, and at a time when the American music legend is in the twilight of his life. Better to award him when he’s still around to enjoy it, and Jerry Lee Lewis most certainly will as someone who’s been lobbying for this distinction for a while.

Jerry Lee Lewis will be officially inducted into the Country Music Hall of Fame later this year in a Medallion Ceremony.