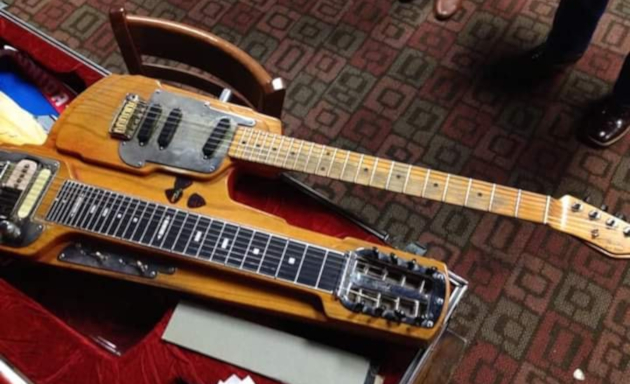 A piece of iconic country music history has been stolen. Country guitar-playing legend Junior Brown’s legendary “guit-steel” guitar was burglarized from a vehicle parked at a hotel in North Attleboro, Massachusetts near Providence, Rhode Island on Sunday, October 6th. Music fans in the Northeast Boston, Rhode Island, the New York area, and beyond are asked to be on the lookout for the unique instrument. Junior Brown’s wife and touring partner Tanya Rae Brown also had her Martin-brand Shenandoah acoustic guitar stolen in the incident. The two were in the area visiting relatives at the time.

“We usually bring [the guitars] into the hotels, and we’ve been a little careless lately, and that’s what happens when you’re careless,” Junior told Saving Country Music by phone Monday night. “They broke a window and got into our rental vehicle, took my guit-steel and Tanya’s guitar.”

Playing guitar since the 60’s, Junior Brown performed with bands such as The Last Mile Ramblers and Asleep at the Wheel as a steel guitar player before he ventured off into a solo career in the mid 80’s. It was at that time that Junior commissioned the production of the guit-steel—a double-necked instrument that combines a guitar and a full-sized lap steel. Made by Michael Stevens, the instrument has been Junior Brown’s signature for almost 35 years, playing the guitar on stage while it rests on a small stand.

There are only two primary guit-steel guitars in existence. The first and original guit-steel called “Old Yeller” has been on display at the Museum of Design in Atlanta recently as part of a guitar exhibit. The second called “Big Red” was the one that was stolen. “It’s sort of faded down to Big Brown,” Junior says. “The lights and the sweat have taken a lot of the red color out of it.”

Police in the area were contacted and have been looking for the instrument. With its unique design, it would be virtually unsalable on the black market, but that doesn’t mean the thieves won’t try to pawn it, or might ditch the instrument in the area.

“It’s like a special old friend, done a lot of shows with it,” says Junior. “Michael Stevens made it for me. He’s got another one on the shelf that he may be able to fix up for me, put a paint job on it and some electronics. But of course like any instrument that you’ve been with for a long time, it has a lot of sentimental value. I just hope the guy doesn’t jet spooked since it’s so hot, and toss it in the river or something. That is what I’m concerned about.”

The unique sound Junior Brown was able to achieve with the guit-steel made him a cult legend around his 1993 record Guit With It released on Curb Records. Songs like “Highway Patrol” written by Red Simpson, and “My Wife Thinks You’re Dead” have since become classic country standards. Junior Brown is a regular on the country music club circuit, and is revered as both a player and a singer for his signature deep voice. In 2017, he was honored with the Ameripolitan “Keeper of the Key” award. The guit-steel is almost just as much a star as Junior. The good news is that people planning to see Junior Brown at his next show on Thursday, October 10th at the Mucky Duck in Houston will still get to see one.

“The Atlanta people at this very moment are shipping [Old Yeller] to Houston for my show on Thursday,” Junior explains. “I believe I’m going to be okay there with it. I’m fortunate to be able to have them send it, and that I’ll be covered for that show. Otherwise, what would I do, stand up there with a Fender Stringmaster steel?”

And not to be overlooked is the missing Martin Shenandoah guitar as well. “It’s a pretty rare guitar and they don’t make them anymore. It’s got a blonde head stock with gold tuners. So that makes it pretty unique,” Junior says.

Junior Brown’s “Big Red” guit steel is as important a piece of country music history as any other, and it’s loss would be shared by the entire country music community. Anyone who has information about the guitar is asked to contact the North Attleboro Police Department at (508) 695-1212.