Kellie Pickler: “I Don’t Need To Be Manufactured” 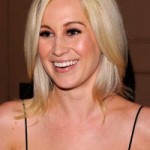 Think what you want about former American Idol contestant Kellie Picker’s latest album 100 Proof and its striking traditionalist approach, but what may be even more interesting and inspiring than the album itself is the story behind it. After recently parting with her label Sony Music Nashville, Kellie’s narrative is becoming similar to the one of Waylon Jennings, the country music Outlaw that Kellie cites as a primary influence.

In a recent interview with Entertainment Weekly, Kellie spoke about the arduous process she went through to release 100 Proof through Sony.

“Well, it wasn’t promoted. When my album came out, I didn’t even have a song out on the radio. Nobody does that. [The label was] spread thin…Recording this album, to be honest and I don’t mind saying this the process was hell. [Sony and I] couldn’t agree on songs. The thing is, my life is a country song. I don’t need to be manufactured, and I don’t need anyone to tell me what to say or what to sing.“

Kellie, who says her influences for 100 Proof and music in general are folks like Tammy Wynette, Merle Haggard, Waylon Jennings, and Kitty Wells, says this album was the first time she was being herself, and spoke about the pressures young artists are put under to abide by music label’s interpretations of what they should be as an artist.

“Since American Idol, it’s been like a blur. I’ve been pulled in a hundred different directions by a hundred different people. You know, signing contracts that I couldn’t read, but I was 19 and green and it was, “Sign this contract or go back to working in fast food,” and I didn’t want to do that. When this album came out, the people that know me, my friends, went, “There’s Kellie. There you are.”…It’s the only album that I’ve ever had that the critics have embraced. You know why? Because it’s me.”

Though 100 Proof has been a critic’s favorite (including this one), it has been a commercial disappointment compared to most major label releases, selling only 74,000 copies since its release in January. Kellie says she has no desire for crossover pop success. “I wanted to make a hardcore country album…I don’t give a damn about being on any other format’s station…I am a diehard country music fan.” And Kellie hints that an independent label may be her next move.

I’ve thought about the major labels versus the more independent ones. The ones that actually can probably do more for you. They have more to prove. [You want] to sign with someone that is about the music and gets you.

Who would have ever thought that American Idol’s Kellie Pickler would be one carrying the country music Outlaw mantra into the modern-day context? And for folks wondering if Kellie’s stint into the traditional side of country was a short-term phase, it appears her experience has only steeled her resolve to be herself. The next shoe to fall is to see if she can find people to believe in her as much as she believes in herself, and if she can enjoy the same commercial success the original Outlaws did back in the mid 70’s when they shook loose their major label chains.