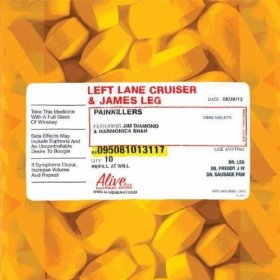 Take the insane punk blues of the two-piece Left Lane Cruiser, add the shirtless, sweat-drenched James Leg from the Black Diamond Heavies, and then put them in charge of reviving some of the most legendary songs in blues music, and you’ve got an album dangerous enough to require a prescription. Jim Diamond on bass and the 66-year-old Harmonica Shah on harp round out the lineup assembled for Painkillers, the new cover album due out 6/26/12 on Alive Natural Sound Records.

I normally don’t get this hot and bothered by cover albums, but when you include pound for pound my favorite Taj Mahal song, the funky “Chevrolet,” my favorite Rolling Stones tune, the rolling molasses of “Sway,” and other such high caliber songs from John Lee Hooker, Jr. Kimbrough, Led Zepplin and Jimi Hendrix, it’s enough to get you pitching a tent in your music pants even if you come to the blues from the outside looking in.

This album has some monster songs on it. Just wait until you hear it!

Painkillers can be pre-ordered on Amazon.