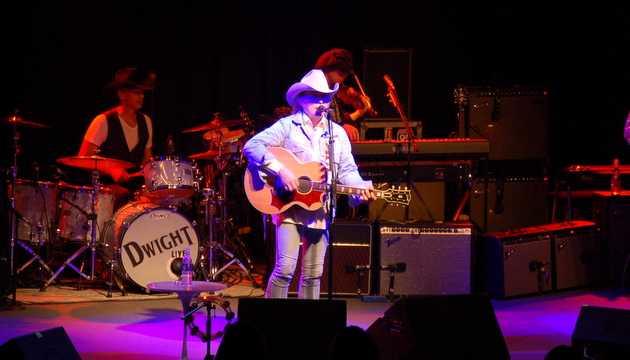 A blanket of thick smoke had settled down in the valleys of Southern Oregon as it tends to do seasonally when the region burns in annual wildfires that have become especially ravaging over the last few years. But that didn’t hold back the crush of eager patrons flocking to the legendary Britt Pavilion in the picturesque town of Jacksonville, Oregon to take in a performance by legendary country music artist Dwight Yoakam on August 22nd. A sort of Red Rocks of the West Coast set up on the side of a mountain, Britt offers a picturesque backdrop for music as warm days turn to brisk nights and the mood of the surroundings enhances the listening experience.

One of the features of Britt is it offers a showcase for local bands on the Performance Garden stage before the main show, and on this particular night it was songwriter Jef Fretwell with his country band. Fretwell (his real name) is one of these songwriters some big-named performer should latch on to and record an entire record of his songs, similar to how Waylon Jennings did with Billy Joe Shaver, or Bobby Bare with Shel Silverstein.

The opening “act” on the main stage was the completely mis-booked and totally inappropriate Matt Whipkey, who walked out in a white blazer a la Don Johnson circa 1985 Miami Vice and proceeded to sing hair metal songs backed up only by his acoustic guitar and the unfortunate decision to run it through an overdrive pedal to punctuate the “lead” parts. A complete and total package of the 80’s, he went to the falsetto in the second half of nearly every verse, and even sang a song called “Reagan Era.” Matt Whipkey did his best to revitalize the time of Pee-Wee’s Playhouse and Alf right before our very eyes, including counting off songs “One, two, three four!” even though there was no band behind him to count off for.

If I had a conversation with Matt Whipkey, I would tell him to not change a damn thing. The problem was not him. In the proper context, there would be people going crazy for his shtick. But at a Dwight Yoakam concert he was like a butter knife in a prim rib world. Unfortunately today so many opening slots are filled as backroom label swaps and booking payoffs as opposed to launching a true search fro the appropriate act who can benefit from the exposure and be entertaining for a given crowd. It’s a stupid system that Matt Whipkey was just as much a victim of as the audience of the Britt Pavilion that evening. 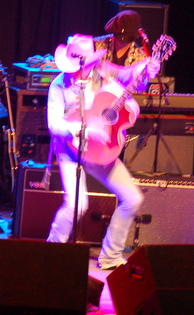 Dwight Yoakam came out to a rousing ovation and immediately launched into a blistering set that allowed little time to breathe between songs, and virtually no breaks from the action. It was one song after another at a rapid pace for nearly two hours, making for one of the most music-filled shows one could see. Forget that Dwight is nearing 60, it was hip shaking, throwing down his signature stage moves during guitar solos, and showing the younger performers how it’s done without an excessive amount of stage posturing and pyrotechnics.

Dwight began with a cover that best describes the Bakersfield Sound he’s a product of, Joe and Rose Maphis’ “Dim Lights, Thick Smoke (And Loud, Loud Music),” followed it up with “Streets of Bakersfield,” and immediately the spirit of California country was awakened in the crowd. You knew this would be a show influenced by Buck Owens and old-time rock and roll just as much as Nashville.

Three of the first four songs Dwight played were covers. Yoakam’s always had a keen ear to pick music that compliments his singing style whether he wrote the song or made it famous, or not. Though if you came to hear one of his hits, or even one of the more popular album cuts from his 30-year career, you probably got to hear it. There wasn’t any time for jamming or stage banter. It was one song after another, similar to what you would expect from an opening band, just extended into a headlining set. Dwight did take a moment a few songs in to acknowledge the smoke in the air, and the firefighters all across the West Coast doing their best to protect homes and lives, including multiple responders who had perished fighting a fire in Washington State just a few days before. The crowd filled with folks who in one way or another had their lives affected by the fires were greatly appreciative of the shout outs. 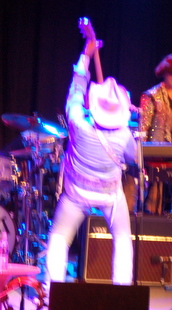 Though Dwight kept the crowd engaged and entertained the entire time, you didn’t get the sense that you knew Dwight better on a personal level by the time the concert ended. He never really took the time to endear or introduce himself to the audience. But nobody walked away with a song they wish they heard but didn’t. Dwight’s band—though short of big names like Pete Anderson and Eddie Perez who put many miles together with Dwight in the past—was as strong as ever, and put their own signature feel to Dwight’s songs. At certain points those old Pete Anderson licks had to show up in some of the signature songs, but Dwight’s backing band was no jukebox.

The record Dwight’s touring at the moment, Second Hand Heart, is supposed to be a throwback to Dwight’s cowpunk days. This came out when he took the time to revue his new material, but it didn’t necessarily feel like a cowpunk show. It felt like a Dwight Yoakam show, though the entire time, whether Dwight was rocking the acoustic or electric guitar, his instrument feed felt a little too loud in the mix, possibly from a clueless sound guy, or the wall of Fender amps with their “On” bulbs glowing red behind him overpowering the main stage speakers.

Most everyone stuck around for the encore, which once a again was a cover, and one Dwight sings the hell out of—Elvis Presley’s “Suspicious Minds.”

Dwight may have taken some time off over the last few years to focus more on acting than music, may be 58-years-old, and may not be the mainstream maven he once was. But the man still puts on one hell of a show, and is doing his part to keep the true essence of country music with a West Coast flavor alive.