Alt-country singer and songwriter Lydia Loveless has come out with a statement saying that independent, Chicago-based insurgent country label Bloodshot Records did not properly address the behavior of an individual associated with the company who regularly sexually harassed and groped her during label functions over multiple years.

Bloodshot Records was founded by Rob Miller and Nan Warshaw in 1993, and Lydia Loveless claims it was Warshaw’s life partner Mark Panick who would commonly grope her and make sexually explicit remarks at label events at SXSW, at shows in Chicago, and other functions. After the revelations over the weekend, Nan Warshaw has announced she is stepping away from the company.

The claims of Loveless come in the wake of revelations from multiple women that Ryan Adams sexually harassed them. Adams has been accused of sending sexually explicit texts to a 15-year-old in a matter the FBI has opened a probe into. Ryan Adam’s first solo album, 2000’s Heartbreaker was released on Bloodshot Records.

Lydia Loveless, who won Saving Country Music’s Song of the Year in 2014, first addressed the Ryan Adams revelations in a series of tweets.

Tell an artist you love them today. Spread some joy that can’t come from a phony ass motherfucker with too much power. AND you know what? Keep writing those fucking records that no one hears a hit or your “usual” style on. That is the spice of life, and we need it, not another bland fucking known commodity.

I’m gutted and hurt by an industry that claims to be creative and here for us and that only proves more and more every day to be just like everything fucking else. Not really at all surprising that a label who allowed a man to grope, paw at and mentally disturb me for over five years still touts Ryan Adams as a fucking genius.

Following the initial tweets, Lydia Loveless posted a much more lengthy statement about her experience on Bloodshot Records via Instagram. It can be found in full below.

I began my relationship with Bloodshot Records when I was 19. They are a fun and creative group of mostly good people—in fact many of them I consider to be friends more than business colleagues. However Nan Warshaw’s domestic partner Mark Panick has long been a source of strife for me. From the day I started a relationship with the label, he was part of all social events, including taking my band and I out for drinks at SXSW the first time I ever went.

He was, for years, as much a face of the label as anyone. I do not think I am along experiencing his casual predation, but this is only my story to tell. For years he would greet me with a rub to the ass and a close whisper to the ear—“They hoooney.” He friended me on Facebook and left comments on my page that would elicit texts from friends—Who is this person? Are you OK?

In one instance, he approached me at the Bloodshot 20th Anniversary party, and while resting his hand between my buttcheeks, told me he loved my messy hairdo because it reminded him of the way girls’ hair in high school would look after they blew him. I didn’t know who to tell about these behaviors because I felt afraid, as for me, shows are work events and Mark was part of the label from my eyes—my label.

I continued to put up with it, dread label events, and endure anxious stomach … knew he would be day drinking with the rest of us. I personally find this day to day harassment to be the most insidious thing women have to put up with, because it leads to a slow erosion of confidence and instills guilt—what do I do? Should I dress more modestly?

After one groping event at SXSW one year, I was told by Rob Miller to come to him if I was ever made to feel uncomfortable again. He relayed to Nan some of Mark’s actions he’d witnessed, and was told by Nan that, “She couldn’t help if people threw themselves at Mark.” This was maybe five years ago. It’s hard to remember specifics. After that, I felt completely betrayed by Nan but I didn’t want to cease my relationship with the label.

A couple of years ago I decide to instill a nobody-backstage-in-Chicago rule, in order to avoid seeing Mark at all, but two people at the label called me and asked if they wanted to have Mark permanently banned from events. I agreed that yes, though it would strain Nan’s relationship to me, that would make me feel more comfortable at my own shows. I have not seen him since except for once on accident after a Cubs game. He did not speak to me.

I don’t think Bloodshot has maliciously encouraged this behavior but instead quieted it to protect their brand, and it has indeed been covered up in my eyes, as the behavior only ceased when I was informed they wanted to begin signing more women.

The Ryan Adams we met in the late nineties was a sweet, manic, disheveled whirlwind of a talent. After the release of ‘Heartbreaker’ on our label in 2000, he signed a major label deal and thereafter our paths rarely crossed.

The Ryan Adams we have been hearing about over the past few days bears no resemblance to the one we knew back then. To be emphatically clear, we never saw or heard a hint of the appalling behavior now coming to light. We are as shocked and disappointed as every one else.

And we resolutely stand by his accusers in their search for vindication and resolution. There is absolutely no room in the entertainment world for this behavior. That it would happen in our corner of it—the underground, independent music scene—a place where many of us turn to as a refuge, makes it profoundly disheartening.

We like to think of it as a space of inclusion and respect, and thus when “one among us” defiles it, the hurt is especially keen. We hope that Ryan quickly and fully atones for his actions and that the voices and experiences of those he has traumatized are heard and respected. And that we all move towards eradicating such unacceptable actions in our creative community.

Bloodshot Records co-founder and co-owner Rob Miller then addressed the Lydia Loveless accusations in a statement. 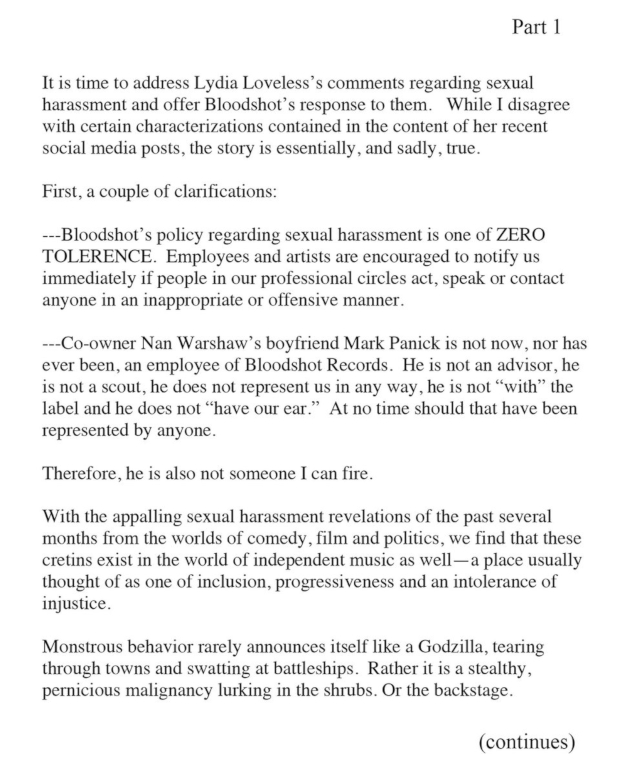 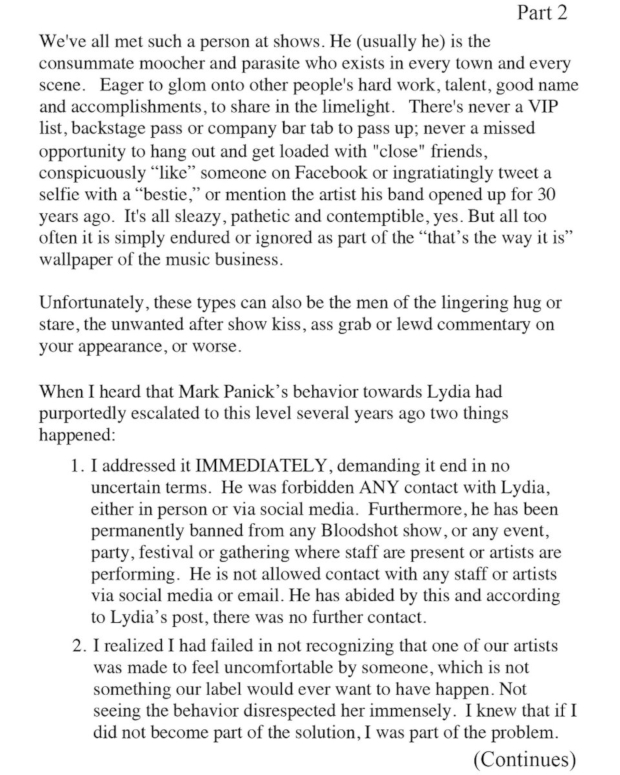 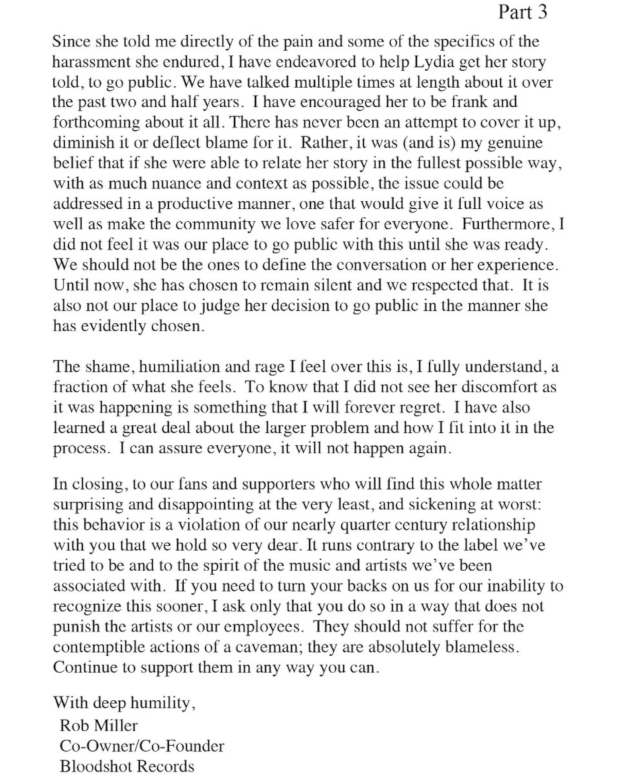 Subsequently, co-owner Nan Warshaw released a statement late Sunday evening (2-17) declaring she is stepping away from the company for the moment. 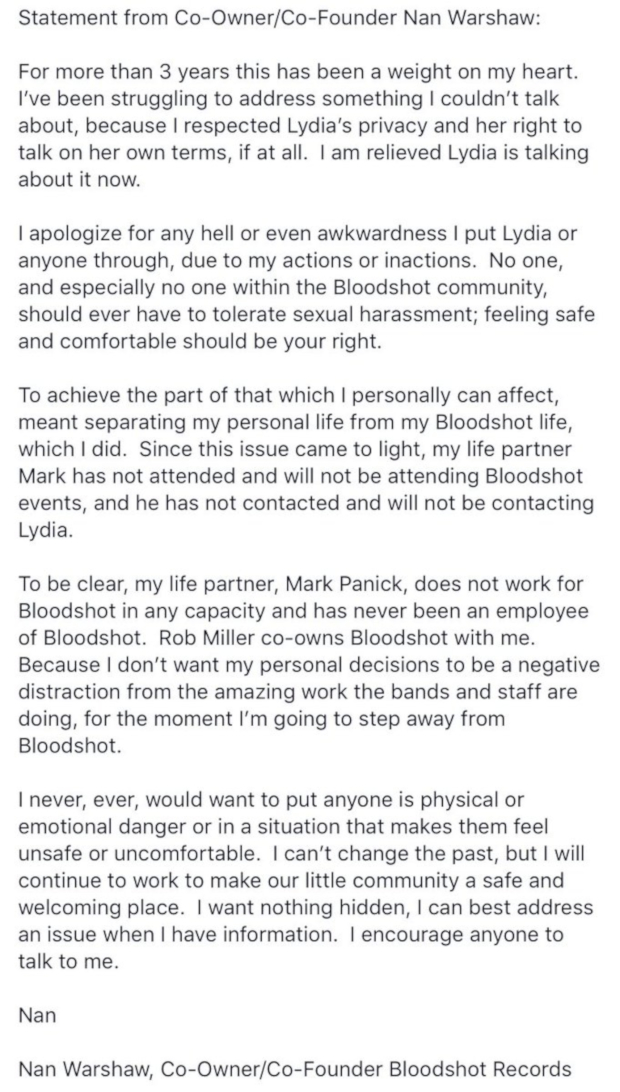 Originally from the Columbus, Ohio area, Lydia Loveless released five total records with Bloodshot going back to her 2011 debut on the label, Indestructible Machine. Her last album on the record was 2017’s Boy Crazy and Single(s), which was a repackaging of a previous EP and select songs from her career.

Nan Warshaw met Rob Miller in Chicago in 1992, and the two started Bloodshot Records with Eric Babcock the following year. Under the charge of giving a home to “insurgent country,” Bloodshot Records is a seminal record label of the independent country and alt-rock world, helping to launch the careers of Ryan Adams, Neko Case, Justin Townes Earle, The Old 97’s, Whitey Morgan and the 78’s, Scott H. Biram, Wayne “The Train” Hancock, and many others. Bloodshot Records was the label for Saving Country Music’s 2018 Album of the Year, Years by Sarah Shook and the Disarmers.