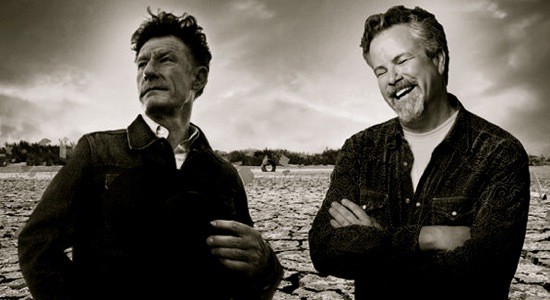 There are those moments in music that will be forever immortalized for one reason or another, whether it’s the writing of a legendary song, a once-in-a-lifetime performance or collaboration, or the birth of a new genre or era. One such moment transpired in College Station, TX in 1976 not far from the corners of Church and Boyett streets when Texas music legends Robert Earl Keen and Lyle Lovett met for the first time.

Both students at Texas A&M University in the late 70’s—in a town not especially known for its music scene—Lyle Lovett was riding by one day on his bicycle when he heard Robert Earl Keen and others picking away on a front porch, and stopped to ask if he could join in.

“This really cool guy with a ton of hair, and a really nice bicycle drove up on the lawn, and I thought, ‘This guy has style and poise.’ And I didn’t even know what style and poise was back then,” Robert Earl Keen recalls. “But I knew he had it … it was like Kelsey Grammer walked into Hee-Haw or something.”

The two got off like Bonnie and Clyde, but that same plot of land where that old porch stood is now a municipal parking lot in College Station, and that moment when two Texas country titans met for the first time is only known through the song “This Old Porch” the two co-wrote together and each recorded for individual projects. All that might change real soon though as some enterprising citizens in College Station are looking to make a bronze cultural marker to the front porch moment.

Since the city now owns the spot where the porch once stood, there’s not much stopping a cultural marker from being erected on the plot. A statue is being commissioned that would feature re-creations of the porch and Lovett and Keen as they appeared as A&M students in the late 70’s, playing guitar and singing. The proposed design also includes a chair in between the two so people can sit and pose for photos.

There still is some hurdles to clear before the “This Old Porch” statue becomes a reality in College Station. Just the foundry costs for the statue are said to be $195,000, not including the site work needed. But seeing the statue as a tourist destination, all signs are that the City of College Station is on board, and the project could be moving forward soon. Texas A&M University System Chancellor John Sharp already has said he will pony up half, with the city considering paying for the rest with hotel tax funds.