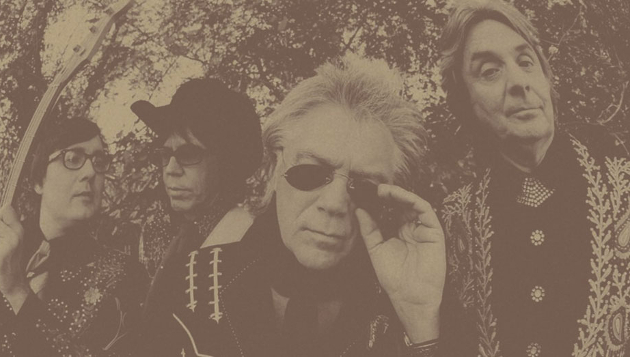 Marty Stuart is one cool cat. Not to inadvertently criticize many of the other living legends of country music, but I get why some traditional country performers can’t always find an audience with younger listeners. Their music might be great too, but you can see why many would identify traditional country with something old and in the past. But when it comes to the music of Marty Stuart, it is not that way.

Go back and listen to his Ghost Train: The Studio B Sessions, or its sister record Nashville Vol. 1: Tear The Woodpile Down. Along with his backing band of the Fabulous Superlatives, there’s an attack, and a youthful freshness to Marty Stuart’s music not always present in traditional country. Marty Stuart never stopped being hungry, and never lost his passion. Perhaps it’s because he never reached that superstar status, and skirted just under the major accolade radar for the majority of his career. That’s allowed him to remain looking forward, trying to find a way to serve the roots of country the right way, and in a manner that invigorates people more than just being an element of nostalgia.

Like Dwight Yoakam and a few very select others in country, Marty Stuart just exudes cool, and that’s contagious to everything he touches. He makes gospel songs cool, and mandolin etudes cool. He makes collecting every piece of country music memorabilia he can get his hands on cool. In the arms of Marty Stuart, everything old feels new, because there’s an exuberance and understanding he brings to the music that is unparalleled.

For his latest album, Marty Stuart could have done the same old thing—recorded 10 to 15 tracks of various subjects, slapped a title on it, and his loyal fans would have lapped it up no matter what it was. But that’s not Marty Stuart. You think old school country is stuffy and needs to think outside the box? Marty Stuart is two steps ahead of you.

For generations, the American West was a promise land of opportunity, and offered the ability for the young to lose themselves in the vastness and magic of wide open spaces, soaring peaks, and painted deserts. It was the final frontier. And when there were no other corners of the West to explore, the children of the 60’s turned to psychedelics to continue their journey of discovery and to try to find themselves.

What’s interesting about the psychedelic era of American music is how short it lasted. Bro-Country has been around for longer as a popular music medium than psychedelia was. And what did many of those California bands do after psychedelic music lost its luster? Bands like The Byrds and The Grateful Dead? They turned to the music that was native to the land they found themselves surrounded by. 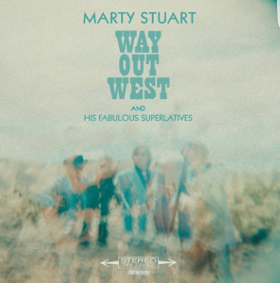 The West has just as much a claim to the origination of country music as Nashville and Appalachia does. The cowboy poets, then the silver screen stars were putting their awe for the landscapes, and the wild stories of the strange places they encountered into song as early as anyone. That moment in the late 60’s and early 70’s when the counterculture youth began to embrace the roots of American music, and began to see the beauty of songs tied so distinctly to the landscape, and the power of a Buck Owens harmony, this is where the listener finds themselves again in Marty Stuart’s Way Out West.

This album is steeped in a moment when forces thought to be so diametrically opposed in culture began to cross breed in ways we are still trying to match the creativity of today. Being a tireless student of the music as he is, Marty Stuart has gone and made a record that delves into this era with such authority and enthusiasm, it comes as close to matching those original moments as anyone since.

Just like The West itself, Marty Stuart’s new album is vast and diverse. You have the Marty Robbins-style desert ballads, you have the California country Clarence White influence, you have the Native American and the Mexican represented since they have such a profound influence on the land, and it’s all interwoven with the wonder that the American West inspires.

Much of Way Out West doesn’t even have words. Those would get in the way of conjuring up the emptiness and profundity one finds when meandering through the open desert, or staring out across the end of the continent from a craggy spire on the coast. Way Out West is like a living, breathing expression of the land interpreted with loving care through Marty Stuart’s vision.

Not that a family friendly and upstanding institution like Saving Country Music would ever condone the ingestion of illegal substances, but let’s just say if your crazy cousin is one who likes to nibble on a certain strain of mushrooms, Way Out West may not be a bad suggestion as a soundtrack to such an experience. Yet like all those good psychedelic records of the 60’s and 70’s whose appeal remained well past that specific era, Marty Stuart’s effort holds up very well regardless of your level of sobriety. The West may have long been conquered by GPS and the ever-present march of technology, but this album gives you an opportunity to get lost in a mindscape once again.

Way Out West is not entirely a song cycle though, or a concept record in the traditional sense. Aside from the setting, there is really no cohesive thematic thread that runs through this record, and the songs don’t especially bleed into one another. Looking for criticisms of Way Out West might be as hard as discovering water in Joshua Tree, but one concern would be that Marty Stuart could have done just a little bit more in the songwriting realm to enhance the experience of this album even further since it already has an epic structure to it.

Two of the best songs on the record are the honky-tonkin’ “Air Mail Special” and “Whole Lotta Highway,” but even with a few natural ties to the theme of Way Out West, they feel like songs that could fit on any Marty Stuart record as opposed to something specific to this release. And there is not one song especially where the lyrics hit you hard. Though the creativity on this record achieves the awe-inspiring, it does feel more like Marty Stuart interpreting these various styles of Western roots music as opposed to a wholly original expression.

That also happens to be what makes Way Out West so special. Big hats off to Marty and His Fabulous Superlative for being so nimble, like musical chameleons bending and shaping and shifting hues to each specific song to match Marty Stuart’s musical vision in representing one of the many facets of the Western experience embodied on this record. Its incredible this album was put together by ostensibly one band when it could very much be a compilation. Mike Campbell (Tom Petty and the Heartbreakers) was just about the perfect dude to helm this project as producer, and the results are hard to argue with.

As much as Marty Stuart is a student of country music—and always has been from his days of playing in the bands of Lester Flatt and Johnny Cash—he’s also a teacher. And with a refreshing boldness, and frankly a little bit of guts from running the risk of being misunderstood by some of the fuddy duddy fans of traditional country, Marty Stuart encapsulates a critical time in country and all of American music when country music became cool. And even better, with Way Out West, Marty Stuart proves it still is.

Purchase Way Out West from Amazon