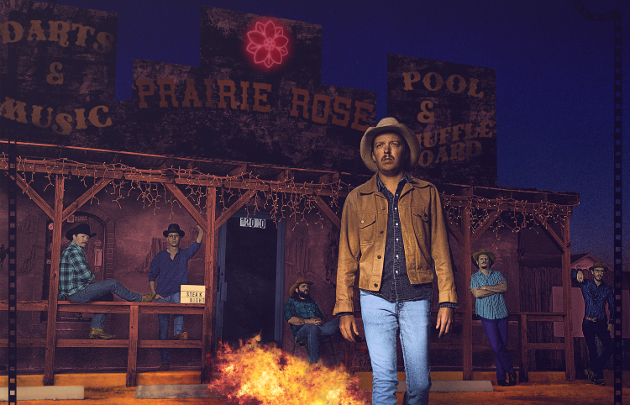 If you’re looking for an authentic Austin, TX honky tonk band as opposed to . . . I don’t know . . . some rich Californians looking to exploit the mystique and romanticism of such a thing, then the first place to start looking might be Mike and the Moonpies. Headed by singer, guitar player, and primary songwriter Mike Harmeier, they’ve been making crowds in Austin and beyond tear up two-step dance floors for going on a decade.

On February 2nd, they’ll be releasing their latest record Steak Night at the Prairie Rose, produced by Adam Odor who is known for working on records from Jason Boland and the Stragglers, The Departed, Randy Rogers Band, Aaron Watson, and more. The album was recorded at the Yellow Dog Studios in Wimberley, Texas, just outside of Austin. Odor also worked with the band on their recent live release, Live at WinStar World Casino and Resort.

“Adam ended up just killing it on the live record, and I think we immediately knew that we were going to make another one together,” says Mike Harmeier, who for the first time handed over complete control of a record to someone else.

“From its inception, ‘Steak Night’ was and is a band album,” says Adam Odor. “No extra layers, no added studio musicians (except for the genius Mickey Raphael guesting on ‘The Worst Thing’), no unwarranted overthinking about what is expected. We worked out musical parts and arrangements together, we worked on instrument tones together, and we hit record on the tape machine and played it together. Some of these songs came together in a matter of 2 to 3 takes, others took many, many, different directions before landing on what you hear today. And most importantly, what you’re hearing on this album is what you’ll be seeing at each show, night after night.” 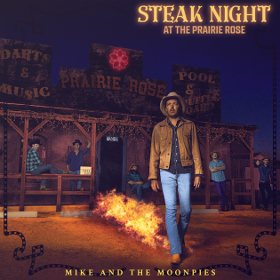 The Mike and the Moonpies lineup consists of guitarist Catlin Rutherford, drummer Kyle Ponder, bassist Preston Rhone, steel guitarist Zachary Moulton, and piano, organ and Wurlitzer player John Carbone. Mike Harmeier wrote or co-wrote all but one of the songs on the new album.

“I love that country music era coming out of the outlaw thing and going into the more contemporary country stuff,” Harmeier says. “For me, that’s when things started to get really interesting musically, and I think this whole record kind of has that ’80s thing to it — probably because there’s so much Wurlitzer all over it.”

The title of the record hearkens back to the first time Harmeier played music in front of an audience at the ripe age of 13-years-old. Steak Night at the Prairie Rose will be available for pre-order starting November 24th.

Along with the new album, Mike & The Moonpies recently appeared on the Bruce Robison-helmed ‘The Next Waltz’ series, covering the Rusty Wier song “Outlaw Love” (see below).