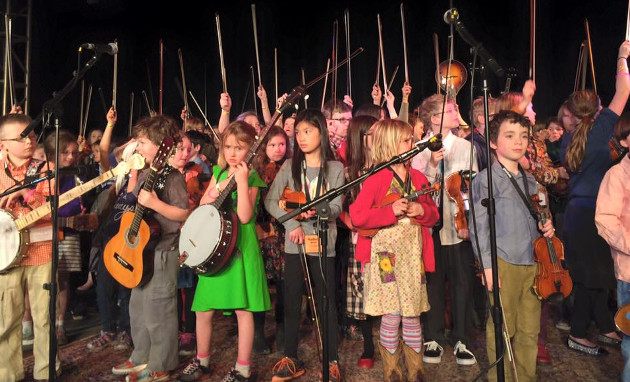 “If a kid takes a lesson and immediately finds that it’s not for them, we’ve still done our job. We still changed that kid’s life. It’s just the opportunity to try.”

Often it is asked why such simplistic and derivative music has taken hold throughout the culture in the United States. One theory is that the gutting of music funding in public schools has resulted in a population that is less appreciative and understanding of the virtues of music, while the new generation of musicians is not being properly recruited, vetted, trained, and inspired.

As the emphasis on education continues to focus more on math and science, music education and artistic funding is virtually disappearing from the public curriculum. One organization based out of southern Oregon is looking to do something about it by stepping up to fill the gap. The Modern Roots Foundation applies for grant and foundation money, solicits local communities and businesses for donations, sponsors charity fundraisers, and then takes the proceeds to help pay for lessons and instruments for low income youth in the community who show an interest in music.

The Director of Modern Roots, Dee Fretwell, says that the disparity of funding for music education disproportionately affects rural areas where roots music has always made its primary home.

All across the United States, the emphasis on testing primarily for math and science has put artistic educators and the students who show interest in music fighting an uphill battle.

“More and more the focus in schools is on test scores,” explains Fretwell. “There is a federal requirement that all schools meet testing scores for STEM, which is science, technology, engineering, and mathematics. There was a huge backlash because arts were left out of it, so they decided just recently to add arts to it and call it STEAM. However they didn’t increase any funding. They’re saying they support the arts, but they’re not going to increase the funding. So either you take money away from these core subjects where they’re going to test you harshly, and if you don’t meet the standard you lose money and support. That’s where Modern Roots comes in. Though we can’t directly benefit a school because of the guidelines, we can come at it from a backdoor, and support the kids who are really interested, or just want a chance at it.” 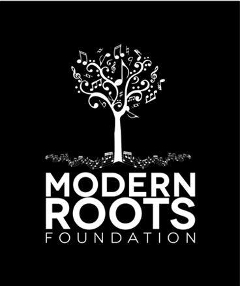 Since being founded in 2013, Modern Roots has paid for over 1,000 hours of private lessons as well as instrument rental for interested students, and it has made a direct impact on the lives of young musicians.

“I had a kid who prior to taking lessons, was reasonably shy in school. After two years of lessons, his math scores went up to exceeding what the state requirement was. He’s definitively become confident in his own skin,” says Dee Fretwell. “And he’s won two awards through ASCAP for songwriting and composition, which all came from him and his own self drive.”

But Fretwell says it’s not just about finding and developing the next maestro. It’s about giving kids the exposure and opportunity to discover if they have a passion for music.

“If a kid takes a lesson and immediately finds that it’s not for them, we’ve still done our job. We still changed that kid’s life. It’s just the opportunity to try, and the support to get there. We do our part by connecting them with instructors and music instruments. If a kid takes a lesson one time, their brain chemistry has shifted, not just because they tried something new that probably felt slightly unattainable, but because they put themselves out there and went for it. It’s an intimating thing, especially if you’re surrounded by other people who it seems to come so easy to them. To be willing to start from the basics is a really brave thing for these kids.”

So could the Modern Roots model work for other rural communities?

“I would love it to,” says Fretwell. “The easiest thing to do would be to create pilot programs all over. Since we’re not providing a brick and mortar location, we’re utilizing the local support. All the local teachers have been vetted. Our primary job is to provide the funding. That’s kind of it, so it’s really easy to duplicate.”

As well as facilitating music lessons for aspiring young musicians, Modern Roots also engages in numerous functions throughout the year to raise awareness of its focus of “Linking Musical Prosperity” and to support music on a bigger scale. One such event is the West Coast Country Music Festival to be held Saturday, August 13th in 2016. The family-friendly, small-scale festival is held annually on top of a mountain in the Pacific Northwest hamlet of the Greensprings.

“It’s our celebration and awareness event,” says Dee Fretwell. “Basically it brings to life a genre that isn’t always represented elsewhere on the West Coast, because our primary focus is on the classic country music genres. We have a little bit of bluegrass, a little bit of old time, but we really try to focus on the classic country honky tonk style. We’re trying to find the bands that are paying homage to the old ways.” 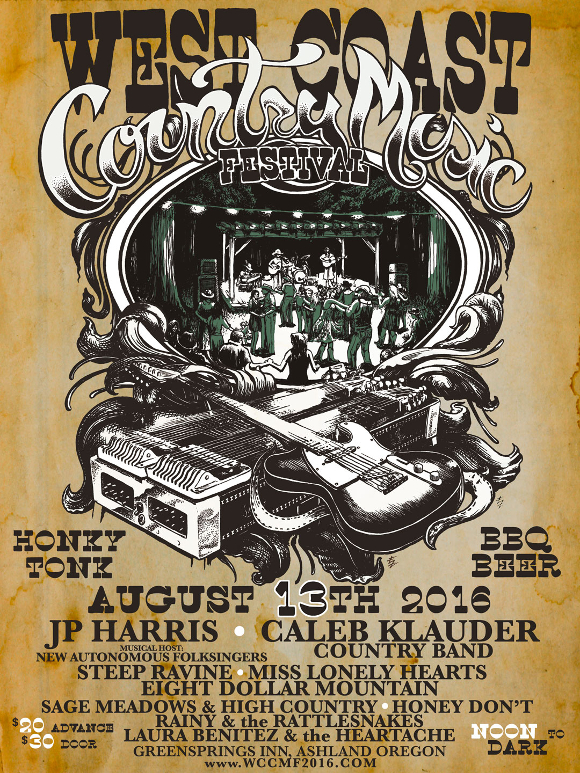