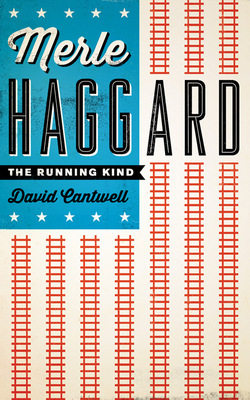 From author David Cantwell and the American Music Series of the University of Texas Press comes a brand new book about the iconic country music Hall of Famer and Kennedy Center Honoree Merle Haggard. Covering his entire career, but focusing mostly on his most prolific decades, Merle Haggard: The Running Kind delves into this complex, often contradictory icon of country music, exploring the creation of many of Merle Haggard’s greatest hits and the life and times that inspired them.

This 294-page book focuses on the music, and the man. From humble beginnings in California, to becoming one of the most well-recognized names in country music, Merle Haggard: The Running Kind explores the fascinating contradictions most of all, the desire for freedom in the face of limits set by the world or self-imposed that define not only Haggard’s music and public persona but the very heart of American culture.

Merle Haggard: The Running Kind is available from the University of Texas Press, Amazon, and all major online book retailers.

Saving Country Music is also giving a copy away to anyone who wishes to leave a comment below, naming either their favorite Merle Haggard album or song. And if you can’t pick just one, list as many as you want. Just make sure to include your real email address so we can contact you if you are the winner.

***UPDATE: Congratulations to David Smith who won the free copy! Thanks everyone else for contributing!

Purchase Merle Haggard: The Running Kind from the University of Texas Press