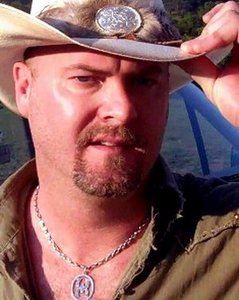 Before opening statements, former police detective and private investigator Larry Flair took the witness stand to determine what lines of testimony would be permissible from him in court. The prosecution attempted to limit Mr. Flair’s testimony, while the defense made the case that Mr. Flair was an expert, and essential to the defense. Mr. Flair is expected to be the primary Witness, if not the only witness from the defense beyond Chris Ferrell.

After being sworn in, Mr. Flair explained his investigation of the crime scene at the Pit and Barrel bar, which offered new insights into the scene and circumstances of the shooting.

Three shots were fired by Chris Ferrell from a .22 pistol, with the 3rd strike hitting Wayne Mills in the top of the head according to the defense. The shooting happened right by the door of the Pit & Barrel. Nashville police detectives found a bullet to the right of the door, what they believed to be a strike mark on the wall to the left of the door caused by the second bullet, and the third bullet fired was the one that killed Wayne Mills. However Larry Flair was able to discover the second bullet in the wall by the right of the door. As soon as he found the bullet, he called police investigators to collect the further evidence.

Ultimately Judge Dozier decided that Larry Flair could testify as long as it didn’t have to do with matters dealing with the self-defense claim, and could remain in court to counsel the defense if necessary. It was also revealed that Larry Flair was paid $10,000 to investigate the crime scene, and a partner of his was also paid $10,000 to work the case. Flair is also being paid $125/hr. for his work in the trial.

The prosecution’s opening statement was delivered by Assistant District Attorney Wesley King. He began by mentioning the George Jones tribute concert at the Bridgestone Arena earlier during the night Wayne Mills was killed, and how Wayne Mills had attended the tribute. Then prosecution explained how the events of the evening resulted in Chris Ferrell shooting Wayne Mills. “What he did was he shot someone unarmed, moving away from him,” said Mr. King. He also said Wayne had a “negligible” amount of amphetamine in his system at the time of the incident.

Wesley King described how Wayne Mills went to see Shooter Jennings play at the Full Moon Saloon before the shooting, and later went to the Pit and Barrel bar with Shooter Jennings and others.

The prosecution then briefly spelled out some of the moments leading up to the shooting, including that after Wayne was shot, he fell outside of the Pit and Barrel. And then the prosecution focused in on what happened after. Wesley King said Chris Ferrell did four things before he called 911:

1. He ran outside and rolled Wayne Mills over.

2. He dragged Wayne into the bar.

3. Talked to a friend on the phone for four minutes.

4. Took a .45 Taurus pistol, and put it on the table where Wayne Mills had been sitting.

The prosecution asserted that Chris Ferrell staged the scene before he called police. Mr. King also pointed out there was a fire department station near the location. When police arrived, Chris Ferrell was being “treated as the victim,” but he shortly gave police investigators conflicting stories. Ferrell first told investigators Wayne Mills “pulled a gun on him.” He then said Mills “grabbed at something.” As time went on, Ferrell’s stories continued to change until he finally admitted to shooting Wayne, who was unarmed.

Defense attorney David Raybin began his opening statements by explaining that Wayne Mills and Chris Ferrell were friends for 10 years, and how Wayne Mills was a big individual at 6’3″ 240 lbs. “He was a big man. But as you will hear, he also had a big heart. My client loved Wayne Mills…People don’t murder their friends.”

Mr. Raybin explained that all of the people who attended the after hours party at the Pit & Barrel bar drove their separately, including Shooter Jennings and his manager Jon Hensley, and that Chris Ferrell personally drove to the Full Moon Saloon to pick Wayne Mills up and bring him back to the Pit and Barrel, “because they were friends.”

At 4:08, Chris Ferrell took a picture of Wayne Mills, Shooter Jennings, Jon Hensley, and another musician Eric Beddingfield at the Pit & Barrel bar in a booth called the “Waymore Booth” or what was described as the “Waylon Jennings VIP section.” It is a picture that has not been made public. It was characterized as a “happy moment” to have Waylon’s son sitting in the booth.

Shortly thereafter, Shooter Jennings, Jon Hensley, Eric Beddingfield, and others left the Pit & Barrel, roughly 30 to 35 minutes before the shooting, and before any bad blood or shouting happened between Wayne Mills and Chris Ferrell.

Right before the shooting, the defense said, “a change comes over Wayne.” Wayne was quoted as saying, “There’s no whores here, there’s no cocaine! What the fuck am I doing here?” He then lit a cigarette inside, which sparked off the altercation that eventually led to the shooting. Chris Ferrell knocked the lit cigarette out of Wayne’s mouth. According to the defense, this stimulated Wayne Mills to shout, “You took my fucking cigarette away!” and then say, “Ferrell, if you ever take a cigarette out of my hand again, I will fucking kill you.” Mills then threw a glass down, shattering it, making a sound characterized by the defense as going off “like a canon shot.”

Ferrell then grabbed a .22 pistol with a scope and fired three shots “out of fear, not over a stupid cigarette,” David Raybin explained. Raybin also pointed out that he chose to draw the .22, instead of the .45 nearby, saying that if Wayne wanted to kill anyone, he wouldn’t have chosen the much smaller weapon. Mr. Raybin described the .45 Taurus as an “elephant gun” where the .22 was a “sighting pistol” because of the large scope mounted on the gun. By choosing the smaller gun, David Raybin asserted “That’s not murder,” but was a reaction to the threat by Wayne Mills.

David Raybin also explained that the broken ribs and other injuries incurred by Wayne Mills happened when he fell after the shooting. After Wayne Mills was shot, he stumbled outside and fell down. No indication was given that a physical altercation occurred before the shooting. The defense also claims that when Chris Ferrell went outside and dragged Wayne Mills back into the bar, it was to render aid.

What happened after the shooting, defense attorney David Raybin agreed with the prosecution that Chris Ferrell initially lied to investigators, but was under direst from having been up for more than 30 hours, and having just shot his friend. Eventually Ferrell did explain to police that Mills was unarmed.

The defense also brought up the fact that police erased the cell phone of Wayne Mills with “magnetic powder” during the investigation, so no information could be taken from it, that an Adderall pill was found on the person of Wayne Mills, traces of amphetamine were found in Wayne’s blood, and that Wayne did not have an Adderall prescription.

David Raybin also brought up the fact that Chris Ferrell was not subjected to a toxicology report by investigators, which he alluded to in a manner questioning the thoroughness of the investigation.

Also, it was established that no video of the incident was recorded, and that no video cameras were in use on the premises, though some may have been present from previous tenets of the building.

After opening statements were made, the court went into recess before the first witnesses were called.

Saving Country Music will post an update later of the witness testimony.

For further updates on the Wayne Mills Murder trial, click below.